Berlin’s airports will see numerous air routes reintroduced today as countries across Europe drop their travel restrictions. From this week airlines are offering new connections to other German cities as well as hubs including Brussels and Vienna. But with just 40 flights planned to take off from Tegel and Schönefeld today – compared with 500 daily departures before Corona – it’s far from a return to normal. The city’s main carrier Easyjet will not fly until next month, while sunseekers looking to fly to Spain and Portugal will have to wait until June 21 and July 1, respectively. Travellers to the US, meanwhile, will not have direct connections out of Berlin until at least the autumn. Passengers are being advised to turn up for flights a minimum of two hours before departure to allow for delays due to additional hygiene measures.

Road crossings to Germany’s neighbouring countries are now fully open as governments relax checks on motorists. While borders have been open to goods vehicles and certain workers throughout the pandemic, this is the first time drivers can cross into other EU countries without the threat of controls. Most borders within the Schengen area are now open, though certain restrictions still apply in countries like Finland and Norway. Meanwhile, travellers bound for the UK must commit to spending 14 days in quarantine upon arrival, under rules that were introduced even as the rest of Europe opens up.

Cross-border rail is also returning as Deutsche Bahn reintroduces several international train routes from Berlin. Services to neighbouring countries will be gradually restarted in the coming weeks including the Eurocity to Warsaw from June 22 and connections via Munich to Italy from June 25. From June 27, Berliners will once again have a direct connection to Innsbruck and the Austrian alps as southbound ICE services start up. “This is a further step towards normality,” the operator’s long-distance boss Michael Peterson said on Sunday. 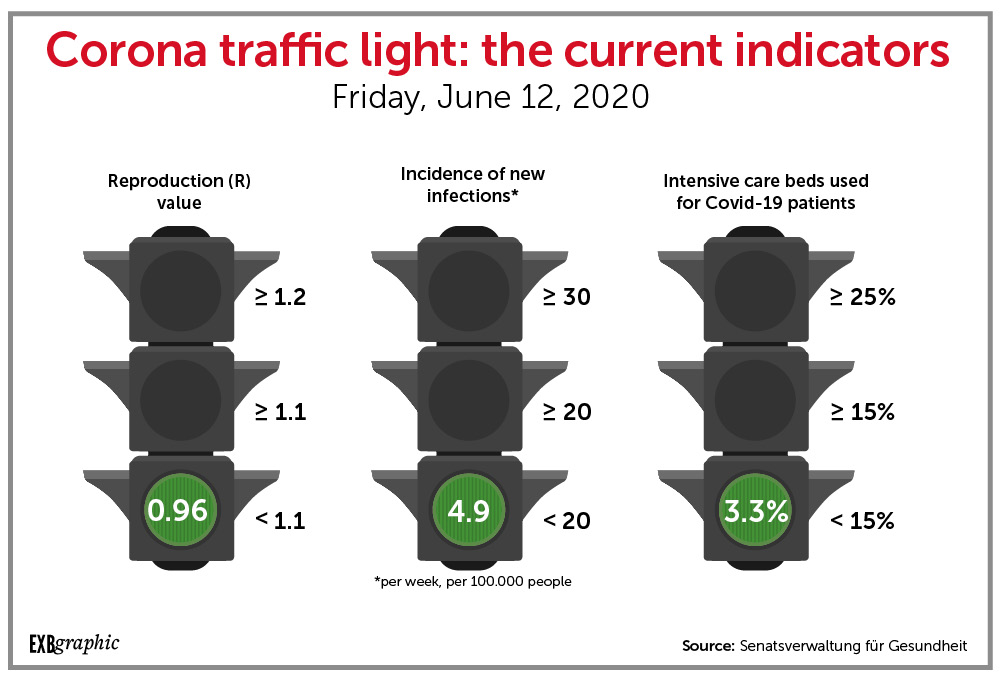 Prosecutors in Potsdam have launched an investigation into three senior doctors and management staff working at the Ernst von Bergmann hospital following a serious Corona outbreak there. Since the outbreak began in March, 47 patients have died in the hospital after being infected with the virus. Of those, 44 had been admitted with conditions unrelated to Covid-19. A total of 138 non-Corona patients became infected during treatment, with one in three subsequently dying. According to prosecutors there is “evidence that patients were avoidably infected with sars-CoV-2 during their stay at the hospital due to negligence.” Three doctors plus members of the hospital’s senior management are facing charges of involuntary manslaughter and causing injury through negligence.

Brandenburg is relaxing numerous Corona rules today, meaning friends, acquaintances and relatives will be able to meet again without restriction. While the two-household and ten-person limit on gatherings is being scrapped, physical distancing must still be observed. Day nurseries are reopening for all today, as are saunas and spas – including the giant Tropical Islands. The changes do not affect the situation in Berlin.

Students in financial distress due to the pandemic can apply for cash aid this week. “Starting on Tuesday, those affected will be able to apply for non-repayable grants of up to €500 a month using a new online service,” Federal Education Minister Anja Karliczek (CDU) told Augsburger Allgemeine newspaper today. According to Karliczek, both German and overseas students are entitled to assistance, regardless of age and the number of semesters they have completed. Applications can be submitted on Tuesday from 12pm via the Ministry of Education website.

Scuffles broke out in Gleisdreieck park on Friday night as police broke up a gathering of 400 drinkers there. Officers arrived after the party, which had been announced on social media, allegedly became too loud. Several youngsters were arrested after stones and bottles were thrown at officers. A further gathering of 500 drinkers in the neighbouring Schöneberger Wiese also ended in bottles being thrown at police. A total of 15 young people were arrested throughout the night.

On Sunday thousands of people gathered for the Unteilbar demonstration against social injustice and racism, with participants forming a 5000-strong human chain stretching across the city. Police estimated that 8000 people joined in the protest, and praised organisers for the trouble-free day. Representatives from Unteilbar spoke of more than 20,000 participants.

The day before protesters also attended numerous demonstrations across town, including a small protest against police violence on Hermannplatz as well as several “hygiene demo” gatherings similar to those seen on previous weekends. One involved a road procession in protest against the Covid-19 restrictions while another saw attendees gather by the Brandenburg Gate to demand a “corona investigation committee”. According to observers, the far-right Nikolai Nerling – known as the “Volkslehrer” – was present at the latter protest.

Climate group Extinction Rebellion has begun a 24-hour protest in front of the Reichstag building today in an attempt to put environmental issues back on the political and news agendas. Participants called on the government to commit to going CO2 neutral by 2025, in the first of numerous protests planned this week across Germany which organisers are calling a “Rebellion Wave”.