Berlin’s Red-Red-Green coalition is debating whether to introduce fines for people who fail to wear masks on public transport. The city’s SPD leadership is firmly behind the measures: “Anyone who gets on a bus or the U-Bahn and does not put on a mask is acting irresponsibly – both towards themselves and others,” SPD faction leader Raed Saleh told the Tagesspiegel at the weekend. But their coalition partners in the Left Party are firmly against any solution that involves fines. The Senat is to debate the proposed fines on Tuesday.

Today Berlin’s Kitas are finally welcoming all children back, but there’s a hitch: in many cases there are not enough staff to operate nurseries throughout the day. “We do not have enough qualified personnel. Either we have to use unqualified staff to maintain opening hours, or we open only with qualified staff, but limit the hours,” said chair of Kita lobby LEAK Corinna Balkow in an interview with RBB Inforadio this morning. Since there are strict rules around the use of non-specialist staff, some centres are just deciding to do half days – bringing continued frustration to parents in full-time employment.

Over the weekend police broke up several outdoor parties at Hasenheide after several hundred ravers gathered in separate events taking place across the Neukölln park. For a number of weekends in a row now, partygoers have gathered there for the illegal parties – with up to 1000 attendees – where distancing rules are largely ignored, according to reports by RBB. When officers arrived at one event on Friday night the main party had already disbanded, though isolated groups were later found. A sound system and gazebos were left behind. Neukölln’s mayor Martin Hikel slammed the gatherings as “pure egoism” in a Facebook post today.

Berlin’s Bürgerämte are close to breaking point as citizens looking to renew IDs, do their Anmeldung or register a new car overwhelm civil servants. Getting in touch with your local authority – let alone make an appointment there – is proving harder than ever as offices finally welcome the public back after Corona. On one Monday between 9 and 10 am the Senate Interior Administration registered 12,500 calls to the 115 advice line. The authorities are requesting that Berliners only make appointments that are absolutely necessary. 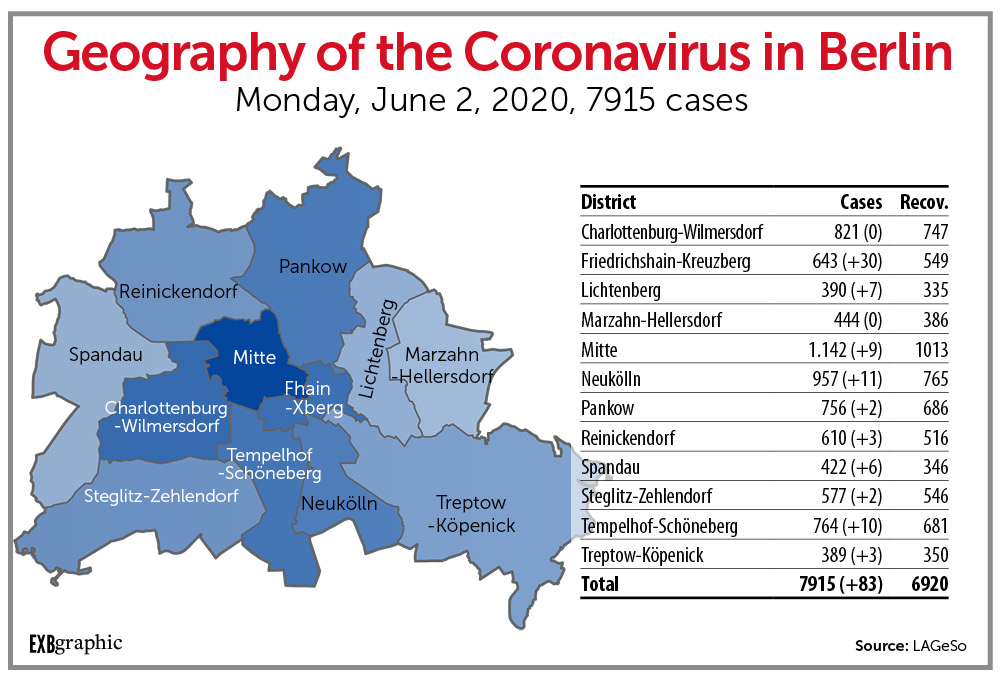 As the schools break up for the summer holidays and Berlin heads to the beach, Deutsche Bahn is set to introduce more trains from Berlin to Stralsund. Every Friday, Saturday and Sunday from June 26, an additional regional train will make the journey to the Baltic Sea gateway to relieve the pressure on existing services and make it easier for passengers to comply with distancing rules.

On August 31, the Staatsoper will reopen for the new season with a dramatically reduced capacity of around 370 seats, the venue announced today. The Unter den Linden opera house has a normal capacity of 1300 seats in its main hall. Advance ticket sales for the majority of the events – including the Staatskapelle Berlin’s 450th anniversary celebration – will start on July 1.

The Paula Fürst School in Charlottenburg has been closed after a Covid-19 outbreak. Several students and staff members tested positive for the virus last week, leading the school to be closed from today – just as the city’s pupils prepare to break up for summer.