Corona fatigue grows, Merkel calls for compliance Berliners are less and less enthusiastic about the coronavirus restrictions, with growing resentment culminating in demonstrations across Berlin and several other German cities over the weekend. Berlin’s Senator of the Interior Andreas Geisel (SPD) said there had been a significant drop in compliance with the government’s call to carry on practicing social distancing. “Although acceptance for the measures is still there, it has become apparent that many people are tired of the regulations,” Geisel told the Interior Committee of the Berlin House of Representatives. In a statement Angela Merkel said that Germany is now entering a “new phase of the pandemic”, and that despite the relaxing of measures it is still necessary for people to follow the basic rules for containing the virus. For the past two days, the “R” value, which is an indicator of the rate of Coronavirus transmission, has exceeded the critical value of 1, meaning that an infected person infects more than one other individual on average. State governments are on standby to slow down their relaxing of the measures, and aren’t ruling out reintroducing restrictions if the transmission rate continues to rise.  Shops count the cost, the BVG gets a lifeline, rent is due Is opening up actually having a positive effect for businesses? Judging by the empty shops across town, not so much. According to a survey by Berlin’s chambers of commerce, two thirds of retailers are reporting sales losses of 50 percent or more even since shops have been allowed to reopen. Falling incomes and fears for their health mean Berliners just aren’t hitting the streets, threatening the existence of shops. All eyes will be on the restaurants, which are due to reopen to diners this Friday. Exberliner has been hearing from anxious restaurateurs awaiting to see whether Berliners will return in large enough numbers to justify reopening. Not even the BVG is immune. The city’s transport authority is set to receive a cash injection of €250m in response to the heavy loss of revenue it has seen in recent months. This is the result of negotiations with Finance Senator Ramona Pop (Greens) according to a report in the Tagesspiegel. The BVG has seen its daily income collapse by half a million euros due to a 30 percent drop in passenger numbers since the crisis. Berliners are facing a rent crunch in the next few months, according to the Berliner Mieterverein. Since the beginning of the month, the tenant’s association has fielded more enquiries from renters who are running out of money because their Kurzarbeit salaries are insufficient to live off. Managing director Reiner Wild told the DPA that, while March and April had not seen any major difficulties, “The really hard time is coming now.” Running a cultural institution with 10 or more employees? From today you can apply for emergency funding from the state-owned Investitionsbank Berlin (IBB). The IBB is expecting to be swamped by applications, so be sure to apply before the cutoff date of May 31. 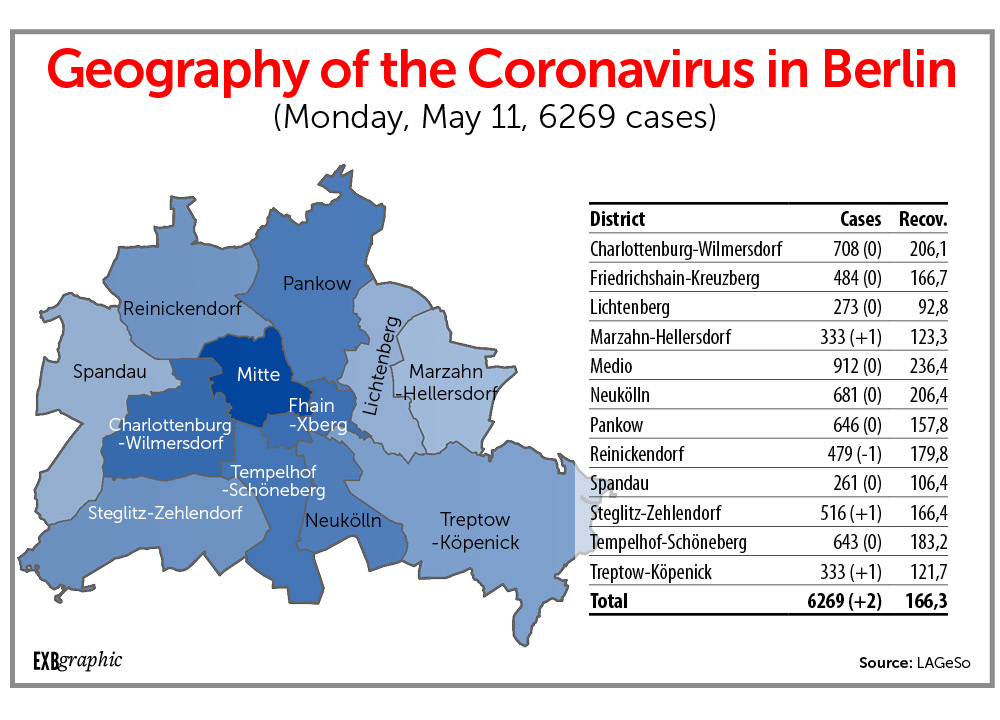 Arm’s length libraries, a Zeugnis boost and visits to Oma Berlin’s libraries are reopening today but with strict social distancing measures, as reported in the Morgenpost. In Charlottenburg-Wilmersdorf, vending machines allow you to borrow and return books contact-free, while at the Berlin Central and Regional Library in Mitte an intricate signaling and delivery system is being introduced. Doormen at the library entrances will ask visitors to give their pre-arranged book collection code, which they pass on by radio to staff, who then bring the books to the counter for a swift, socially-distanced handover. Top marks for 2020? The German Association of University Professors and Lecturers is demanding that school pupils sitting the Abitur this year receive a grade bonus because of the disruption they have faced due to the lockdown. “The Abitur class of 2020 should not be disadvantaged,” Association president Bernhard Kempen told the Funke Media Group. If, for example, the Abitur grades of 2020 students were 0.4 or 0.5 points worse, pupils would be given a bonus to make up the difference. School leaders across Germany would have to agree on any Corona credit. And finally, kids can now visit their Oma as long as the distancing rules are followed. That’s according to President of the German Geriatric Society Hans Jürgen Heppner, the DPA reports. “A visit by grandchildren to their grandparents for a limited time, without physical contact and in compliance with the hygiene rules is certainly no problem,” Heppner said, though having them take over the babysitting is sadly out of the question. When are the kitas opening again?