Cookbook author Attila Hildmann’s continued presence at the anti-lockdown demonstrations is catching up with him, with German retailers pulling the Corona sceptic’s vegan products – which include cooking sauces and hummus – from their shelves. It seems the reputational risk of being linked with Hildmann’s conspiracy theories has grown too big. “We clearly distance ourselves from Mr. Hildmann’s statements, ” a spokesperson for Denns Biomarkt told the Tagesspiegel. The chef, who has become one of the most high profile coronavirus sceptics, also had his Instagram account suspended over the weekend for breaking the terms of service. Hildmann’s social media is awash with improbable claims, including the suggestion that the head of the Robert Koch Institute Lothar Wieler is a “high-ranking freemason”.

Meanwhile, FDP leader Christian Lindner has today apologised after he was photographed hugging a friend outside Restaurant Borchardt at Gendarmenmarkt on Friday night. A photo appeared in tabloid newspaper B.Z. of Lindner in front of the glitzy eatery hugging his entrepreneur pal Steffen Göpel. Lindner expressed regret for the tender moment, blaming a “lack of concentration,” and explaining that, despite social distancing rules being widespread knowledge, such slip ups were inevitable. “We’re all human,” he said. The restaurant was forced to close that same night by police due to obvious overcrowding. According to B.Z. reports, officers found the venue packed full, with “clearly too many” diners present. The restaurant’s management deny breaching distancing rules.

BER will be dependent on state funding for several years due to the Corona crisis, airport bosses have said. “We may still need support in 2021, 22, 23,” Director Engelbert Lütke Daldrup told the Brandenburg state parliament today. World air passenger numbers have collapsed since March, and Berlin is no exception, with existing airports Schönefeld and Tegel facing a €300m shortfall due to low demand. How much the air travel market will have recovered by the time BER opens in October remains to be seen, though Daldrup expects weak passenger numbers for years to come. 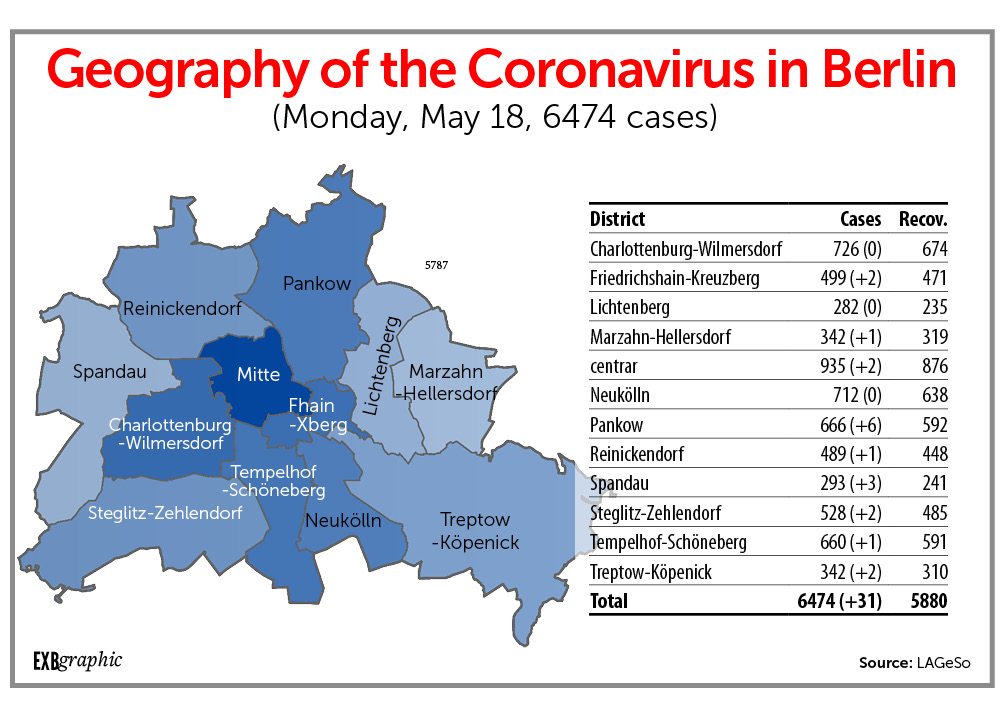 Meanwhile, restaurants might as well close their doors again given how little money they have made since opening on Friday, according to Berlin’s gastronomy association. “From our point of view, it was a catastrophe,” said Vice President Uwe Schild of Dehoga Berlin. Many business owners were finding their sales at an all-time low, as punters stayed away despite the warm weather. Given the extra costs of opening, it would have been smarter if cafes and restaurants had remained closed, Schild believes.

Berlin’s current housing market is good for buyers but bad for renters, according to an analysis published this week. Consulting firm F+B compared today’s prices with March and found that rents rose from €14.29 per square meter at the beginning of the crisis to its current rate of €15.11. Meanwhile average purchase prices across the city fell from €6048 per square meter to €5702 over the same period. Analysts believe that so-called “shadow rents” are driving up rental prices. It is thought that landlords and tenants are agreeing on rents that far exceed Berlin’s recently introduced rent cap, with landlords hoping the new law will soon be overturned by the courts.

Summer holidays in Spain, Berliners get ready to hit the pool, pigs on the loose

New hope for those wanting a break in the sun: this summer tourists will be able to head to Southern Europe’s holiday resorts, at least according to Federal Tourism Commissioner Thomas Bareiß (CDU). “The chances are good that we will be able to spend our summer holidays not only in Germany, but in other European countries,” Bareiß told the Stuttgarter Zeitung. Today Foreign Minister Heiko Maas (SPD) is holding discussions with his opposite numbers in Spain, Italy, Austria and Greece on how the restrictions can be eased. Germany’s current advisory against non-essential travel runs until 14 June, after which the restrictions would be relaxed under Mass’s plans. But Bavaria’s CSU Chief Markus Söder is opposed. “I don’t agree with Heiko Maas that we can start planning trips to Italy or Spain or France in a month’s time,” Söder said. Instead, the CSU leader wants to support Germany’s domestic tourism industry, of which Bavaria is a key part.

Outdoor swimming pools will reopen on May 25 after the Senat gave pool bosses at the Berliner Bäder Betrieb the green light. Preparations are “running at full speed,” with a gradual opening plan in place to make sure every pool plays by distancing and hygiene rules. And while swimmers will have to put up with locked changing rooms and cordoned-off showers, a visit will be a bargain for many, with single tickets just €3.80.

At least one group of Berliners are enjoying their freedom: in Zehlendorf around 30 wild boar were spotted trotting across a suburban street on Sunday. The long-snouted group included several newborns, with police blocking the road to allow them to pass freely. A Tweet featuring a video of the pigs has been viewed over 2.5 million times.