The coronavirus reproduction rate in Berlin has been persistently high, causing the Senat to raise its Covid-19 alarm today for the first time. Today’s R number, as it’s known, is 1.37, following reported values of 1.23 on Sunday and 1.22 on Saturday. According to the city’s three-part traffic light system, if the R rate remains above 1.2 for three days in a row, one of the warning lights changes to red. Announcing the alert, Health Senator Dilek Kalayci (SPD) said the city’s health authorities would be watching closely. “We have to wait and see whether this crossing of the red line persists,” she said. If the reproduction rate remains above one for a long time, there is a danger of exponential growth in the virus. The other two traffic lights – reflecting the number of new infections per 100,000 inhabitants and the share of Corona patients requiring intensive care – remain green. If a second light turns red, authorities are likely to intervene to delay the easing of the lockdown.

Berlin’s current R rate of 1.37 is the highest in Germany, and means that an individual infected with the virus will pass it on to 1.37 other people on average. Roughly speaking, this means that 100 infected people pass on the virus to 137 people, who go on to infect 188 people, and so on. The R value is difficult to calculate, and the Senat’s health administration has been criticised for failing to detail its methodology. It maintains that by having three different traffic light indicators, any decisions it makes are based on the overall picture and not just the R number.

As Berlin prepares to announce a further easing of the coronavirus restrictions, the German federal government is pushing for some measures to be kept in place until at least July 5, according to Der Spiegel. The 1.5m distancing rule and the mask requirement, which were due to lapse on June 5, are set to stay. Meanwhile, in an apparent relaxing of measures “Up to 10 people belonging to two households will be allowed to meet in private at home” and “in public places”, according to a draft resolution by Chancellery Minister Helge Braun (CDU) seen by AFP. These plans mirror what is allowed in Berlin already, so will have little impact here. The rules to contain the virus vary from state to state, and the federal government is set to begin consulting with states in a bid to bring some consistency.

Confused about what you can and can’t do? Let us explain: under current rules, members of two separate households are allowed to meet as long as a distance of 1.5 metres from household to household is kept. This means members of two large shared flats may meet, but not three friends living in three one-bedroom flats. While sports clubs could reopen as soon as the end of May, theatres, nightclubs and cinemas will remain closed for the foreseeable future. 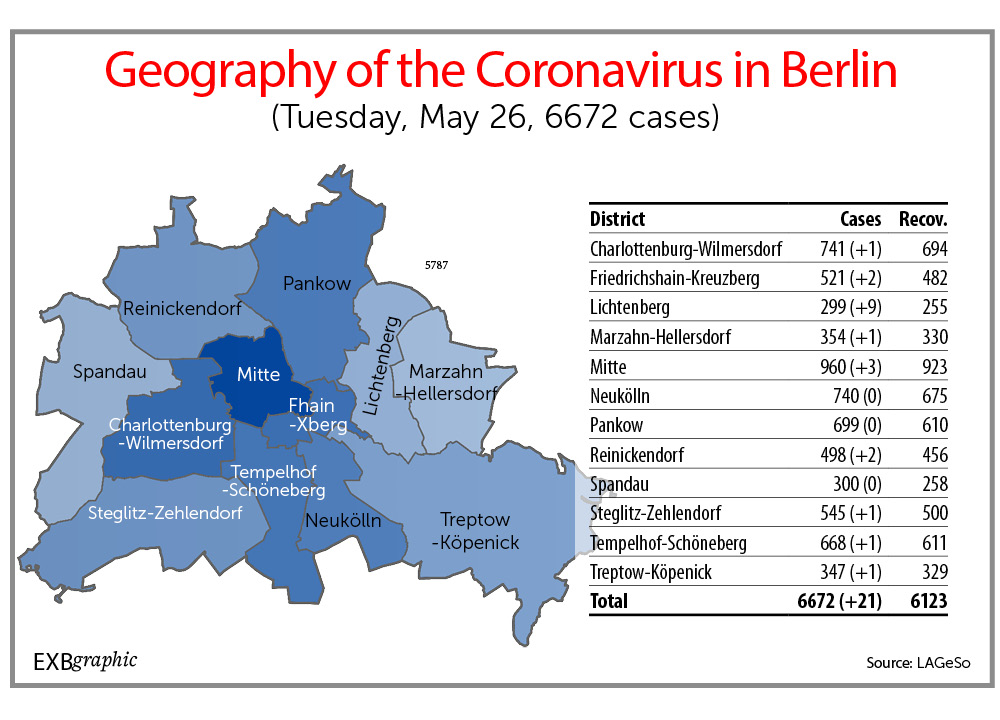 The number of domestic violence incidents attended by police over the past months has increased year on year. In the period March 16 to May 17, the number of officer deployments showed an increase of 20 percent over the same period last year, the Senat’s interior administration has said. This increase in reported incidents has not resulted in more criminal charges, however, with 2525 cases under investigation – within the range of previous years. “No general conclusions can be drawn about the trend since the pandemic,” an interior spokesperson said. The police suspect the growth in the number of callouts could be down to the greater numbers of people who are at home and thus able to report violence to police. The Senat had been expecting an increase in domestic violence since the lockdown came into effect, booking out two hotels to house an additional 130 women. However the need for safe places has remained well within capacity, with 72 percent of women’s shelters in the city currently occupied.

Meanwhile, multiple protests were held across the city over the weekend, the largest being Sunday’s #LeaveNoOneBehind demonstration in front of the Rotes Rathaus by Alexanderplatz. According to police, 350 people attended the rally in support of the refugees arriving in the Greek islands. The demo was registered, though police ended up dispersing crowds after additional protesters arrived. The day before, several gatherings of people protesting against the coronavirus restrictions were reported, including 250 people at a spontaneous demonstration on Unter den Linden and a 100-strong gathering at Alexanderplatz. A meeting of the far-right by the Siegessäule was also dispersed by police. So-called Reichsbürger – perhaps belonging to a Berlin offshoot of the gilets jaunes movement – had gathered to demonstrate against the lockdown under the banner “Heimat und Weltfrieden” (homeland and world peace) before being told to leave after too many people turned up. No more than 50 individuals are allowed to gather to demonstrate, as per Berlin’s coronavirus rules.

The following outdoor swimming pools opened today: Sommerbad Wilmersdorf, Sommerbad Olympiastadion, Sommerbad Spandau-Süd, Strandbad Wannsee, Strandbad Lübars, Strandbad Friedrichshagen and Strandbad Jungfernheide. And despite the rain Berliners were seemingly desperate for a swim, with the Morgenpost reporting good turnout at Wilmersdorf. To ensure swimmers keep the required distance, five lifeguards are employed there to sit by the edge of the pool and monitor. Fancy a swim yourself? Be aware that all pool visits must be pre-booked online before arrival.

Wedding celebrations are permitted but big bashes are out of the question – that’s according to a ruling by the Berlin Administrative Court announced today. The court was responding to an appeal by a woman who wanted to celebrate her marriage at the end of May with 80 guests. The ruling makes clear that whilst the coronavirus rules do permit weddings to be held amongst families and small groups, the number of guests must be limited to 20.

Speaking of weddings: district mayor of Wedding Stephan von Dassel (Green) was left red faced at the weekend after demanding the city establish a pop-up cycle lane in his area. Why? It turned out the person responsible for cycle paths in Wedding is – Mr von Dassel himself. Might want to have a look at your brief, Stephan…