Senat extends lockdown Following yesterday’s federal conference, the city will prolong the current lockdown measures until April 26. On Tuesday, however, the Senat will meet again to plan for when restrictions can be scaled back and when shops can re-open. Chancellor Merkel said yesterday that retail spaces with no more than 800sqm could open their doors again on Monday, but Mayor Müller has said it will be Wednesday or Thursday for Berlin, with potential exceptions from the federal guideline for department stores. Opposition parties CDU and FDP have criticised Müller’s government for its slow response to the lockdown relaxation Angela Merkel announced yesterday. Burkard Dregger, head of the CDU’s parliamentary group, said it was weak to postpone some of the most urgent decisions until Tuesday, despite spending hours in session. FDP group head Sebastian Czaja said Berlin’s economy would have needed a clear course of action. The mayor, however, said that “whoever isn’t ready to compromise, risks that there will be no relaxation of the measures.” He added the contact ban remains crucial because no other means of protection are available. He confirmed that no mass events will take place in the city until at least August 31 and has also ruled out demonstrations for months to come, saying the risk was simply to great. 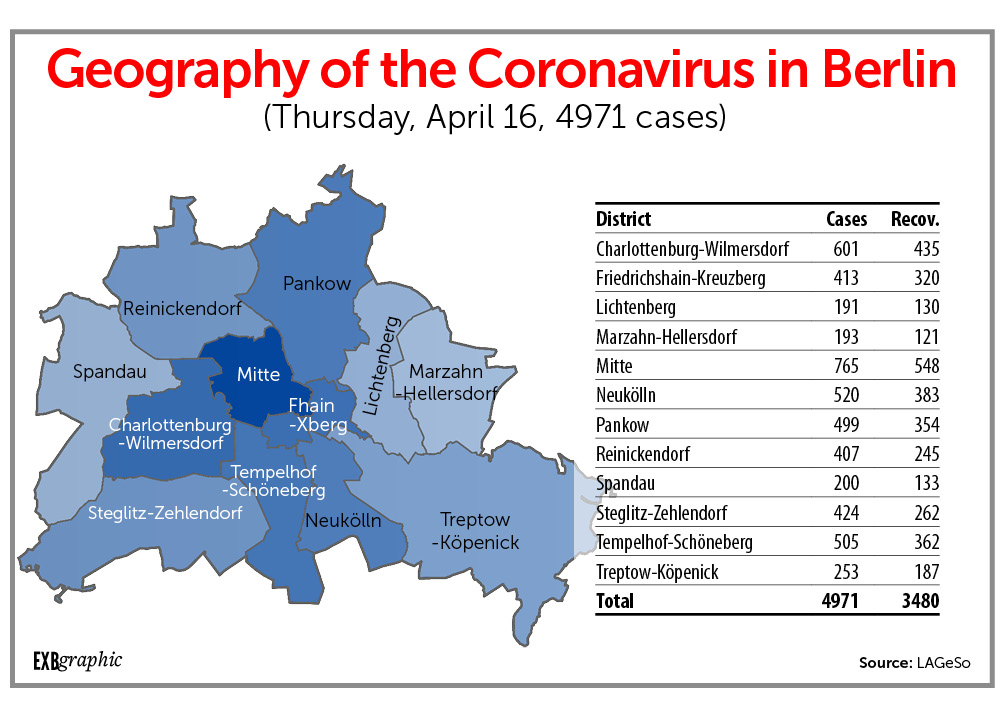 Back to school (and kita?) Also in today’s session, the Senat agreed on a plan to reopen Berlin’s primary and secondary schools, starting with the respective final-year students: 10th graders are supposed to return on April 27, 6th graders are on for May 4 and the Abitur exams are to go ahead as planned, starting in only four days on April 20! Don’t worry, it’ll be fine: The city’s education office has told Tagesspiegel that 700,000 rubber gloves are being delivered to the schools.   The student union, naturally, is furious about the decision to carry out Abitur exams next week, and MSA exams the week after. Head boy Miguel Góngora encouraged fellow students to take legal action against Health Senator Sandra Scheeres (SPD) and assured them the union would support anyone who decided to go down that route. He told Berliner Zeitung that Scheered had apparently “lost her mind”. Góngora also scolded the Greens for going along with Scheeres and reminded them that many students would soon be able to vote. Smells like teen spirit! Meanwhile, kitas are to extend their emergency childcare from April 27, with a return to normal operations planned for August. August! Many parents are frantically waving the white flag already, and parents’ group Kita-Krise have started an online petition for the government to support families and single parents with a monthly payment of €1000 or €1500, respectively. So far, around 5000 signatures have been collected. Katharina Mahrt, head of the group, says it’s not fair to leave parents alone to carry the financial burden of limiting the spread of the coronavirus. Fair point – now, what’s Mutti gonna say?  If you have a spare laptop kicking around, consider donating it to the kids of Neukölln. As the Tagesspiegel reports, the district’s parents association and education commissioner are calling for donations because some kids don’t have the tech to keep up with all the e-learning (and sometimes smartphones just don’t cut it). Otto-Hahn-Schule in Buschkrugallee 63 is serving as a drop-off location between 10am and 4pm daily. Activism and other good news A GP from Reinickendorf, Ulrike Leimer-Lipke, has launched a new online platform for connecting doctors with Covid-19 experts and patients who want to get tested, have a video consultation, need treatment despite being infected or are in a high-risk group and scared to sit in their regular GP’s office. There are even some practices who offer doing Corona swabs at their window! Doctors must register themselves and are then findable by postcode. Check it out at www.virusdoc.de. Fridays for Future go virtual: For Global Climate Strike Day on April 24, the young activists are encouraging their followers to join them using the catchy hashtag #Netzstreikfürsklima. On their website, FFF is promising a ‘Streikprogramm’ complete with live music, speeches and streams from all over Germany. For an offline touch, they are accepting banners and posters which can be dropped off at 30 locations in Berlin by April 20, to then be locked away for 72 hours (so potential traces of virus will dry) and displayed in a “central and symbolic” spot in the city. Whether this will be as popular as the habitual truancy remains to be seen. More bike lanes ‘popping up’: The Senat office for environment and traffic has announced there will be more temporary bike lanes for safe riding in Friedrichshain and Kreuzberg from April 21. Expect a total of 4.5km on Möckernstraße, Kottbusser Damm, Kottbusser Straße an Tempelhofer Ufer. They are reminding everyone that the 1.5m distancing rule goes for cyclists, too. And don’t forget that helmet or all the isolation will have been for nothing! Good news for Zoo, Tierpark and the Botanical Garden: Mayor Müller has said they will be allowed to open their gates to the public again next week. He said the animal houses (bird house, tropical house, aquarium?) are likely stay closed, but wandering among the enclosures and in the park spaces should be possible again. The monkeys will finally be able to people-watch again and visitors will have the panda cuteness to enjoy.