In today’s session the city government ratified a catalogue of fines for various violations of the current anti-Corona safety measures (as extended until at least April 19). From now on, anyone found to be out and about without reason (exercise, food-shopping, going to work or the doctor, for example, are still permitted) will be fined up to €100, for hanging out in a group that’s not one’s own household it’s up to €500, the same goes for disregarding the 1.5m distance from other people. Ouch!

This said, Berliners are still permitted to sit down on park benches alone, in pairs or with people from their own household, provided it’s for short periods of time and that people keep a 5m distance. Barbecues have been added to the list of restrictions. Mayor Müller reminded Berliners that the crisis is still ongoing and asked them to not visit family over the Easter holidays.

On a positive note, and with all those sunny park benches in mind, the police union’s push for closing all public parks was rejected. Interior Senator Andreas Geisel said the splendid weather forecast for the coming week was likely to pose a challenge, but Berliners had proven themselves responsible so far: “We cannot constantly keep making the regulations stricter,” he said. Genau! 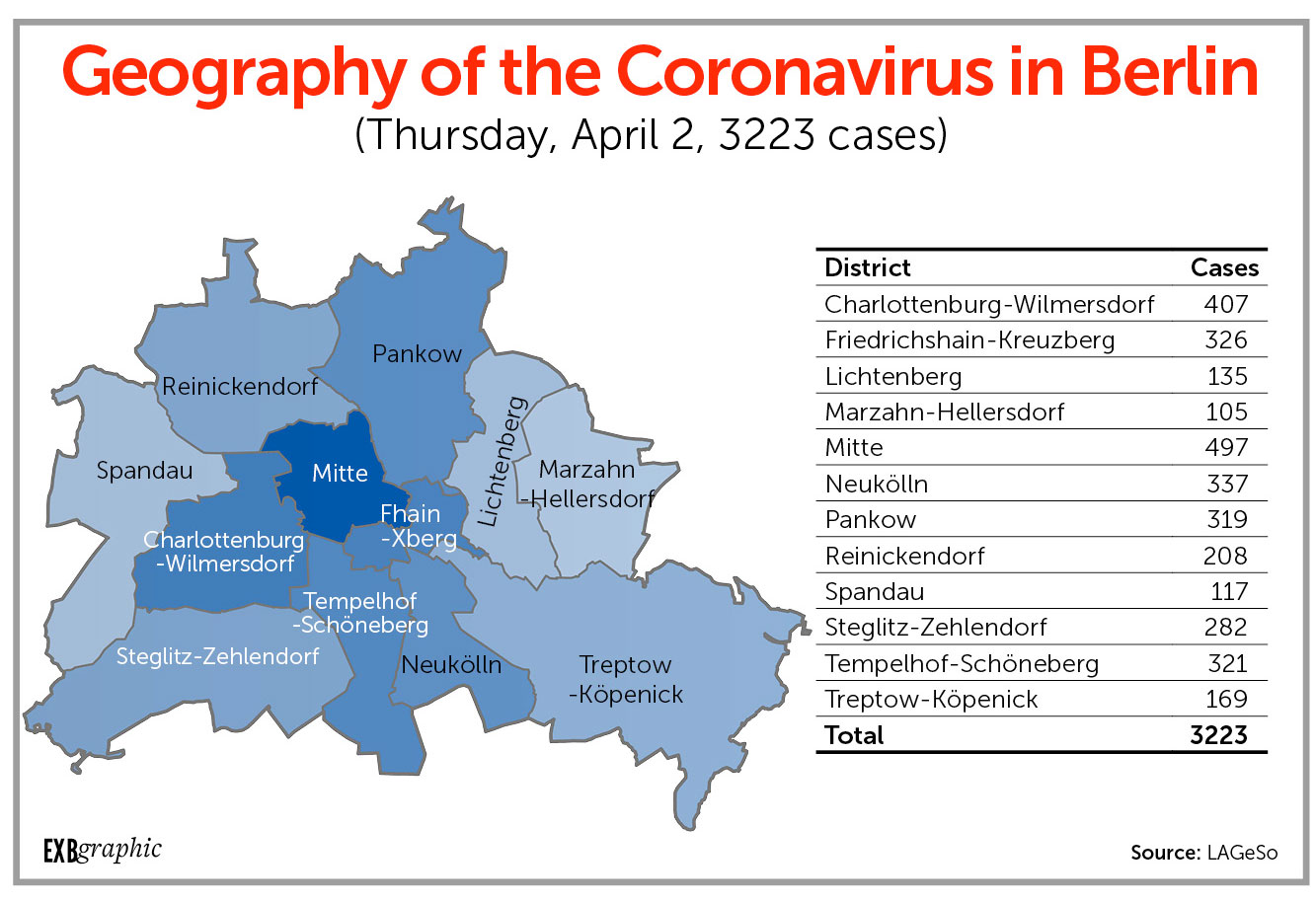 Opposition parties CDU, FDP and AfD are concerned about the economic impact of ongoing restrictions for businesses. FDP politicians demanded the Senat looked into when shops could be allowed to reopen again to secure jobs. The AfD group voiced similar concerns and likened Berlin’s economy to Corona patients facing imminent death. Burkard Dregger, head of the CDU group said city government should start working on an exit strategy for when safety measures can be relaxed.

Berlin startup investors and incubator Rocket Internet are expecting a higher insolvency rate within their network. But CEO Oliver Samwer said they had €2.1 billion ready for investments and reminded shareholders that many successful companies were started in times of recession. The Samwer brothers famously invested in retail giant Zalando as well as Delivery Hero and HelloFresh.

Luxury tie manufacturer Auerbach Berlin has seized the day and begun to produce masks. Unlike their usual silk goods, these €18 patterned accessories are cotton and washable, but not, the shop acknowledges in the disclaimer, certified for medical protection. But hey, there is a market for fashion.

Prisons: So far Berlin’s penitentiary institutions have been spared by Corona. As the Tagesspiegel reports, they are now receiving fewer visitors who have to remain behind glass. Meanwhile, inmates get more phone time and options for them to facetime their nearest and dearest are being expanded. The post didn’t state whether they’d be allowed the Houseparty app.

City parliament is looking for an alternative location to convene since the good old Abgeordnetenhaus proves to be quite cramped. Currently, only half of Members of Parliament fit inside the chamber whilst taking into account new social distancing measures. Parliamentary President Ralf Wieland (SPD) has asked permission to use a Messe trade fair hall (next to the soon-ish to be Covid-19 hospital).

Health Senator Kalayci told the Tagesspiegel that currently 50 percent of ICU beds equipped with respirators were being used (10 percent for Corona patients). This is good news, because before the Corona crisis 80 percent were occupied. The senator said the strategy to keep capacities open was working, and that more and more beds were made available: from 1045 beds pre-pandemic to 2200 by the end of April.

Justice Senator Dirk Behrendt (Greens) has said there has been an increase of 11 percent in domestic violence cases since the city announced its lockdown measures. Although 10 days may be a little fast to draw dramatic statistical conclusions, women’s shelters have already increased their capacity as of yesterday and Equality Senator Dilek Kalayci (SPD) said the city had rented two hotels – one for isolated women who experience violence at home and the other for women who cannot find a place in women’s homes. Better safe than sorry!

Deutsche Bank has donated 100,000 face masks to Berlin they announced today. The masks were purchased during the Sars pandemic in 2002 and 2003 and the bank has been sitting on them ever since. They have been handed over to the German Armed Forces and the health administration with the specific aim to be distributed to clinics, nursing homes and other authorities with ‘’special protective duties’’.

The Berlin student union wants to dedicate a further €450,000 to supporting students facing financial emergencies. The Morgenpost reports that earlier this week, a first €120,000 were made available so students could get a one-off payment of €500. Within one night, 350 students applied, a spokesperson told the newspaper, but there was only enough for 240. By now the union has received 1100 applications and is looking for support “from outside”. Freelancers are definitely more spoilt in this city!