May 1 and weekend update

As of Sunday night, 6004 Corona infections have been confirmed in Berlin. 154 people have died of the virus, 5091 patients have been declared recovered.

Starting on Monday, the BVG return to their regular bus and train schedule, hairdressers may again cut hair (no dry cuts, though, no beard shaving or eyelash dying and compulsory mask-wearing for staff and clients). 50 people at a time may again take part in religious ceremonies. The Staatsbibliothek and other academic libraries are again loaning books.

On Saturday afternoon, 300 people were demonstrating on Rosa-Luxemburg-Platz, many of them taking part in the “hygiene” demonstration called for by the so-called Kommunikationsstelle Demokratischer Widerstand. 350 police were at the scene and collected personal information of 56 people.

Senator for the Interior Andreas Geisel (SPD) and police chief Barbara Slowiek said it wasn’t possible to enforce Corona rules as they had hoped to on May 1. Several thousand left-wing protesters – and supposedly spectators – had gathered in Kreuzberg. Overall Geisel called the day “successful, peaceful and violence-free”, 450 people were arrested, which is up from 158 last year.

Also on May 1, a ZDF camera crew filming for the satirical Heute Show was attacked by a group of 15 masked aggressors. Four ZDF employees are in hospital. Six suspects were arrested, three of whom were identified as previous extreme-left offenders.

Museums plan reopening: The German Historical Museum is planning to reopen its Pei building currently housing the Hannah Arendt exhibition on May 11, Georg Kolbe Museum also reopens May 11 (with special hours for at-risk groups), Natural history museum to open May 12.

Spielplatz news of the day: Most of the city’s playgrounds are open as of today, except for some in Mitte and Pankow (where they will open gradually), Tempelhof-Schöneberg (where the barrier tapes come off on Monday) and Friedrichshain-Kreuzberg (where the sandbox madness resumes tomorrow, May 1). The strict rules toddlers must follow are to be enforced by the Ordnungsamt.

The Greens have ideas on how to take some pressure off Berlin families: They recommend closing off more of the city’s streets to make room for outdoor play, a rotation of small groups in kitas and youth clubs and special offers for the summer holidays, which they think should not be cut short (as the federal CDU had suggested). MP Marianne Burkert-Eulitz said: “The summer will be long and hot.”

Christian Drosten and his team of Charité researchers have terminated their study on Coronavirus concentration in children’s throats. The result: Kids are “probably” as likely to transmit the virus as adults do, leading Drosten & Co. to warn authorities not to open schools and kitas too quickly. By coincidence, the findings were made public on the same day the German state of North Rhine-Westphalia announced it will fully open primary schools on Monday. Hmmm.

Today at the Abgeordnetenhaus: Debates on testing, May 1 and lockdown

Health Senator Dilek Kalayci (SPD) has made a new suggestion for post-confinement safety: Today at the Abgeordnetenhaus she said “we will test systematically in nursing homes, kitas and schools.”  Pankow district councillor Torsten Kühne protests that this would be an impossible undertaking. He said that in Pankow alone there are 40,000 students, in the wider city it’s more than 400,000, and that capacities are too limited to test them all regularly. The Tagesspiegel has heard that the health administration now speaks of “representative testing” – whatever that’s supposed to mean!

Tomorrow 5000 police will be enforcing Corona safety and other rules, Senator for the Interior Andreas Geisel (SPD) said at today’s parliamentary session: “We are prepared.” Meanwhile, the police union GdP thinks that mask-wearing protesters could pose a problem: covering one’s face is forbidden during demonstrations. But what now that everyone is wearing masks? “And you can’t forbid anyone to combine that with dark sunglasses,” the Berlin GdP deputy head pointed out. He criticised the government for not clarifying the rules.

Some more controversial statements at city parliament today included FDP health expert Florian Kluckert bashing the Senat for their decision to close shops and theatres: “Had the Senat made masks compulsory two months ago, the shops wouldn’t have had to close,” he said. He also suggested some theatres could have been kept open to see how the virus spread among the audience. Yeeeah, can’t see anything wrong with that, right? Furthermore, the AfD demanded all “disproportionate” lockdown measures – prescribed by a paternalistic state which doesn’t trust its people – should be lifted immediately. 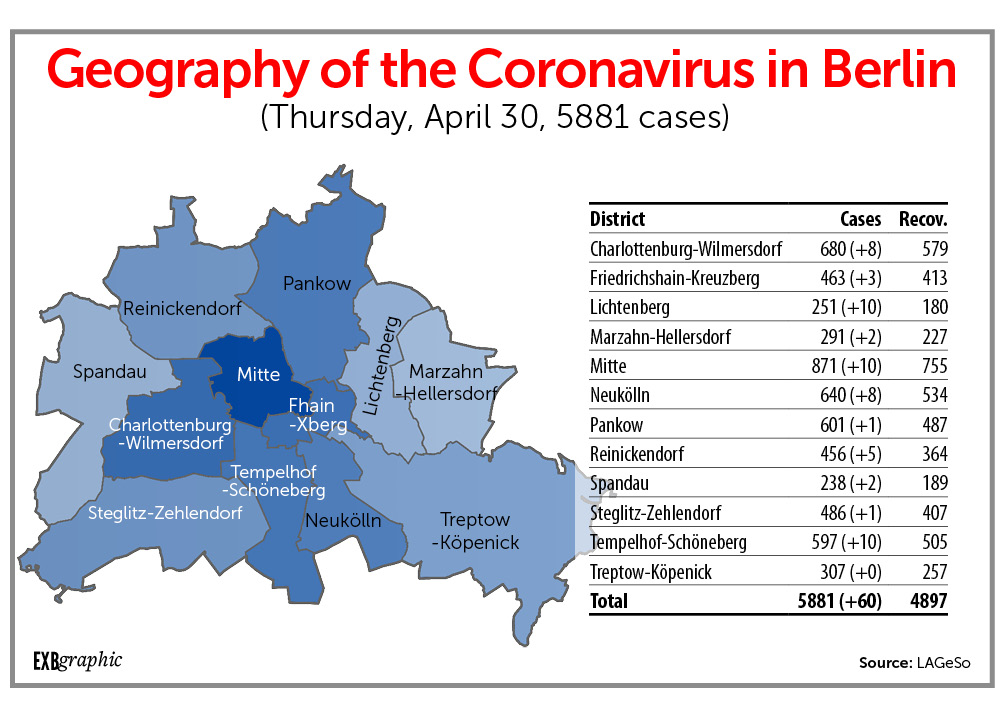 Unemployment, Kurzarbeit and the “systemically” underpaid

The Berlin-Brandenburg branch of Germany’s federal employment agency has released new statistics showing Corona’s impact on the job market. According to their numbers, April unemployment was 22.7 percent higher than it was for the same month last year. This month, 28,369 Berliners lost their jobs, and overall nearly every 10th Hauptstadt citizen is out of work. Bernd Becking, head of the regional department, said that the Kurzarbeit option to reduce employees’ hours and get part of the salaries paid by the state prevented an even sharper rise in unemployment.

Mayor Michael Müller (SPD) has called for the Kurzarbeitergeld to be raised: Currently the state covers 60 percent of net salaries lost due to reduced hours (or 67 percent for parents). Müller wants to see it raised to 80 and 87 percent, respectively. “The idea of solidarity is especially important now,” he said, “It’s the order of the day.”

Also in need of a raise, potentially, are many of the people working in what’s been labelled “systemically relevant” jobs: The Berlin-Brandenburg statistics office has found that workers in hospitals, doctors’ offices, retirement homes, supermarkets and security firms are paid below average. The average gross income in Berlin lies at €4047 per month. The “systemically relevant” make 41 percent less on average. Go figure!

Department store win and  Theatertrefen ahead

Berlin’s administrative court has ruled that the KaDeWe, Karstadt and Kaufhof department stores can fully reopen – even spaces of more than 800sqm, as is the official limit for retail space. The court said that, in principle, the limit made sense because larger shops mean a bigger flow of customers, but that it was unfair to allow malls to open and impose restrictions on department stores.

Theatertreffen, the most prestigious festival for German-language theatre (with English subtitles), kicks off online tomorrow. Six productions will be streamed on May 1, starting with a Hamlet interpretation from Bochum, which fittingly addresses the pros and cons of digitised theatre. The stream will be free to watch, and the festival is asking for voluntary donations for the artists.