The EU Commissioner for Home Affairs has called on all Schengen states to cease border controls by Monday because of the “ improved pandemic situation”. And while the German government has extended its travel warning for 160 countries including Turkey, Turkish Airlines subsidiary Anadolu Jet has reactivated its connections between Berlin and Istanbul as well as Ankara today. The world is getting larger (or smaller) again!

At the same time, the city’s Administrative Court has ruled that people travelling to Germany from outside the Schengen zone no longer have to enter a 14-day mandatory quarantine. A Berliner planning to return home from Mexico had complained about the rule. The judges argued the regulation could only apply to people who are sick or suspected of carrying the virus – a suspicion that cannot be legally applied to anyone coming from outside the EU. It’s a de-confining world out there.

Back here in Berlin, traffic has almost reached its pre-Corona level, the Traffic Information Centre reports. On parts of Potsdamer Straße, for example it is back to its former level of congestion, while Leipziger Straße is among the streets that are the furthest from pre-pandemic levels, at about 90 percent. Frankfurter Allee is getting around 95 percent of its usual motorised traffic. Actual congestions mostly happen in the afternoon, while the morning commute is more spread out. 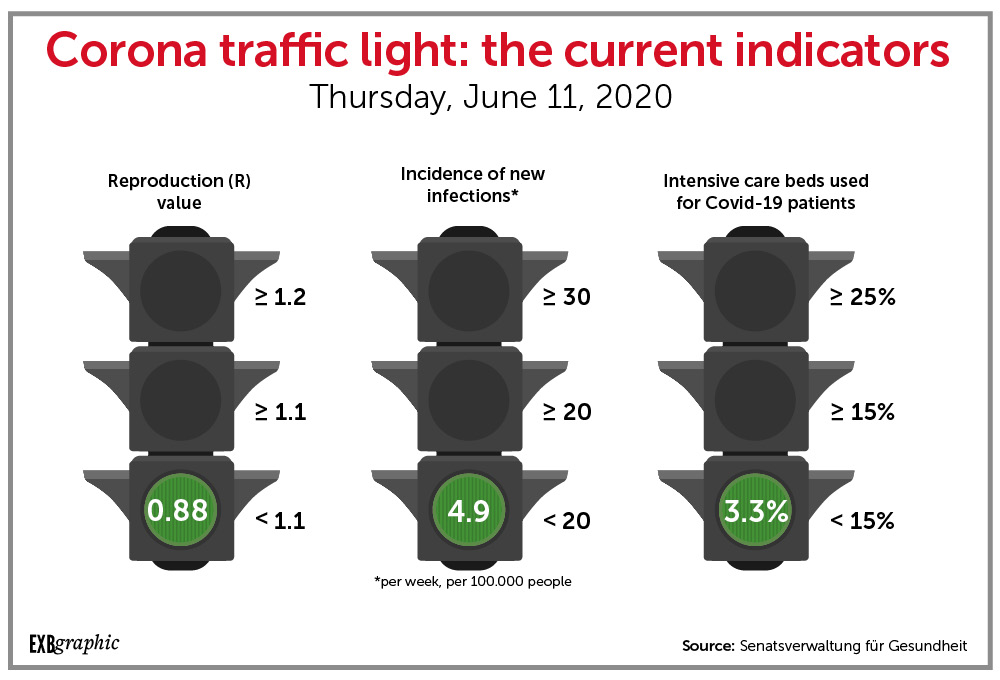 Plan B for schools under attack, demo de-escalation and Corona app pricetag

Not everyone is convinced schools will be sufficiently prepared in case Corona strikes again after the summer holidays. Yesterday the Senat’s Health Office sent out a six-page letter to schools, listing a set of standards they would have to adhere to, including, for example, a minimum of three hours’ worth of lessons per day for every primary school pupil. CDU opposition MP Dirk Stettner had a bit of a déjà-vu and criticised the Senat for, once more, leaving schools to make their own safety plans.

The Senat wants to cooperate with demonstration organisers to make protests in the city as safe as possible. The government has been criticised for not making sure protesters kept the 1.5m distance during Saturday’s anti-racism demonstration on Alexanderplatz. They are now offering to liaise more closely with demo organisers to find alternative routes or locations to ensure hygiene standards can be met. Sunday’s #Unteilbar protest against social injustice and racism shouldn’t be a problem: participants will form a long, socially distanced human chain from Alexanderplatz through Kreuzberg to Neukölln.

The German government’s Corona tracking app will to cost €20 million – a good price for the complex application according to government sources cited by AFP.  Once the app is programmed (by Deutsche Telekom and SAP), operating costs will be €2.5 to €3.5 million per month, mainly for two hotlines: one for technical support questions and one for confirmation for when someone reports a positive test result. Man, will they be disappointed when privacy-conscious Germans opt out! 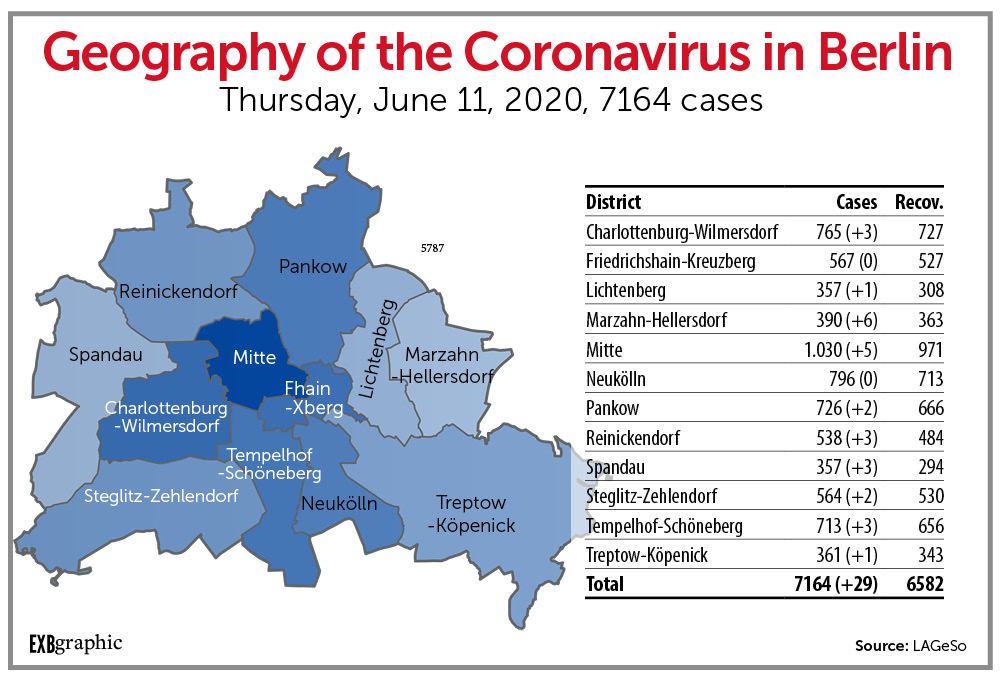 The BVG is monitoring passengers’ mask-wearing behaviour (through CCTV on platforms, estimates from ticket inspectors and other personnel) and sending a weekly report to the Senat. Over the last few weeks, they report decreasing diligence – depending on the time of day. Their last evaluation says that, on average, 78 percent of passengers wear their Alltagsmasken (85 percent on the U-Bahn and buses, 75 percent on trams). During rush hour though, it’s more than 90 percent. At least it’s not the other way around.

Public pool operators Berliner Bäderbetriebe are cracking down on pandemic sceptics: A Tagesspiegel reader reported to the paper that he’d witnessed a woman being kicked out of Insulanerbad in Steglitz for swimming too briskly (eight police were at the scene) and a man was turned out for going up the stairs on the wrong side of the staircase (four police got on the case). Bäderbetriebe told Tagesspiegel both were Corona deniers. Ah. Now it makes perfect sense!