With restaurants allowed to reopen tomorrow (read here why this could actually spell the end for many), districts are busy figuring out what they can offer in terms of extra outdoor space. Friedrichshain-Kreuzberg is planning to reserve parking spots and close streets for restaurant tables and has started an online survey to determine where these measures will be needed. Other districts, like Mitte and Schöneberg, are not going to tamper with streets. Schöneberg’s Ordnungsamt boss Christiane Heiß (Greens) said it would be hard to justify why some streets should be closed and others not. Pedestrian organisation Fuss e.V. is getting ready to go to court over repurposed sidewalks.

Meanwhile the Bundestag has passed a raise of Kurzarbeitergeld: For employees whose hours have been reduced by 50 percent or more, the state will now pay 70 percent of their net income from the fourth month on. After six months, the Kurzarbeitergeld is raised to 80 percent (for parents 77 and 87 percent respectively). Berlin Senator for Social Affairs Elke Breitenbach (Die Linke) said the decision is coming too late for many Berliners, whose slim earnings can easily leave them below the poverty line in a situation like this.

Also receiving more money – this time from the city – are Berlin’s sports clubs. Senator Andreas Geisel (SPD – not only the State Minister of the Interior but also Sports) announced the Senat is prepared to give €8.2 million in financial aid to non-profit Vereine struggling to survive during the crisis. Select professional clubs (potentially including Alba Berlin, Füchse Berlin and the BR Volleys) will also benefit, Geisel said.

After heavy criticism from Berlin’s public health officers (see yesterday’s news), Health Senator Dilek Kalayci (SPD) has defended her Ampel system to monitor Corona developments in the city. She said the three-factor plan allows for a much quicker reaction and potential reintroduction of lockdown measures than the federal government’s hard limit of 50 new infections per 100,000 people. She also said her office was in daily contact with district health offices. They must have forgotten to mention the Ampel when they last called…

Eager to lift restrictions rather than reintroduce them is Senator Geisel: He is pushing for the strong regulations on demonstrations to be repealed. In parliament today he said a return to full freedom of assembly was possible as early as June if new infections remained at the current low level. He qualified that all measures needed to be reevaluated regularly as long as the situation was still “fragile”.

Speaking of demonstrations, a whole bunch have been announced for Saturday. Several left-wing initiatives will be taking to the streets in Mitte to protest against conspiracy theorists and right-wing populism. Three such demos (50 participants allowed) have been registered for Rosa-Luxemburg-Platz, one for Alexanderplatz. Another edition of the ‘hygiene’ demos, which has not been registered with the police, is also set to take place on R.-L.-Platz. Whether another protest against the anti-Corona measures will happen at Alex (as it did last weekend) remains to be seen. 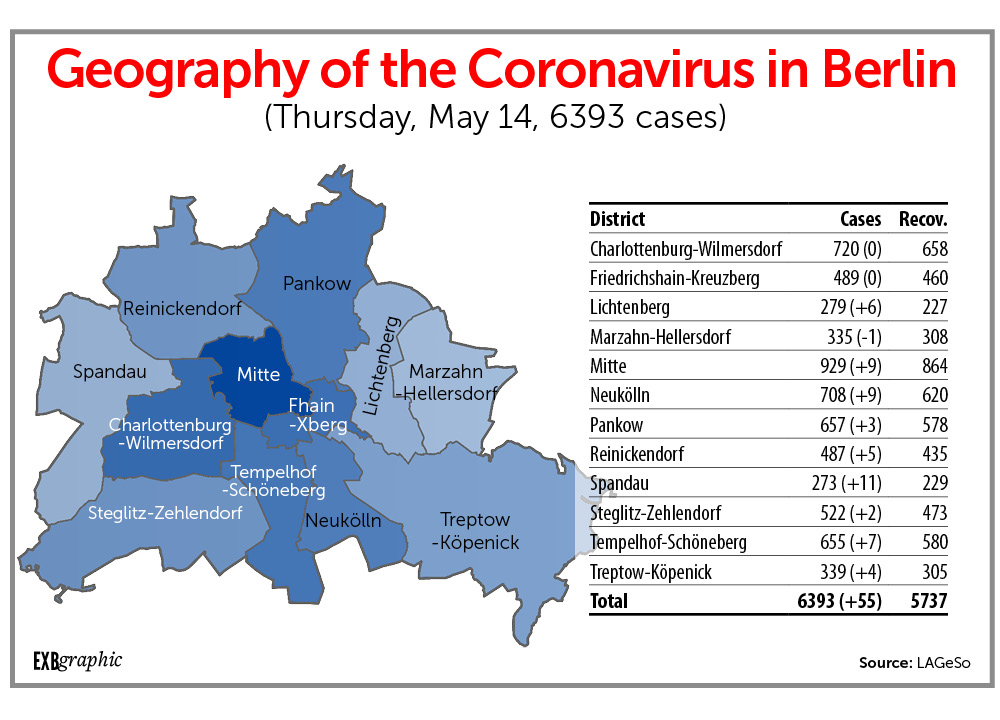 What Corona patients die from, a potential vaccine and clinic not ready after all

The Senat has released information regarding the deaths of 11 Corona patients who have been autopsied: Pathologists found that four of them had died from blood poisoning in connection to pneumonia, three from lung failure and two from heart failure. Whether these numbers are representative is not clear. A Hamburg University Hospital, meanwhile, has released a study according to which the virus also attacks the kidneys – based on a total of 27 autopsies.

Good news from Thuringia: The CureVac pharmaceutical group has reported promising pre-clinical test results for one of their vaccines. Testing on healthy humans will continue as early as next month. Any volunteers?

In the meantime, if you live in Lichtenberg and are in desperate need for single-use face masks, the Bezirksamt has got your back. From Monday, they will hand out 50,000 free masks in 14 locations. They will give out a number of masks “appropriate” for the respective household and point out that they are meant for those Lichtenbergers unable to buy masks or who are dependent on using public transport.

The Tagesspiegel reports that Senator Kalayci has publicly opened the new Corona hospital on the Messe exhibition grounds before the district have its final acceptance. The Charlottenburg-Wilmersdorf councilor in charge said they still need to do another walk-through to check all required changes from their last check were made. The Senator, in defence mode again, said this wasn’t relevant information as long as no patients were actually expected at the clinic. And everyone is hoping it’ll never come to that…

Continuing the kita debate, Mayor Michael Müller (SPD) has said that while the Senat’s target was to offer at least part-time daycare for 70 to 100 percent of kita kids until summer, he could not promise this goal will actually be reached. “We cannot assess today what may be possible again in four weeks,” he said. But, Müller said, the Senat would try in the future to inform child care providers sooner. They’ll be happy to hear.

Open-air cinemas have proposed a safety plan under which they would like to reopen on May 31. This would include fewer, spaced-out rows of audience seating, online booking and social distancing on-site. Arne Höhne of Piffl Medien, operator of Freiluftkinos Friedrichshain, Kreuzberg and Rehberge, told the DPA that 400 seats, instead of 1600, in Friedrichshain could be an option and all distancing and hygiene measures could be observed. Will this sway the Senat? Mayor Müller has told Berliners to wait patiently for their cinemas to reopen. We’ll see!

Confirmed outdoor fun is to be had at the Zoo where, finally, the Panda Garden has reopened. On weekdays only and provided there aren’t too many visitors, panda twins Pit and Paule will be released into their outdoor enclosure. The Zoo has reported 100,000 visitors since its reopening two weeks ago. Tickets for specific time-slots still need to be booked in advance.