The Berlin government convened today to discuss further options for loosening Corona-restrictions. After hours in session, Senators agreed that from Tuesday (June 2) bars will be allowed to reopen as long as guests sit down at tables and don’t stand around in groups at the bar. (Good luck trying to enforce the 1.5m distancing in some of those tiny bars in Neukölln.) City government also decided that gyms will be allowed to reopen (also from Tuesday) – for one guest per 20sqm, but showers, changing rooms and saunas must remain closed. Restaurants will be allowed to stay open until 11pm. And it doesn’t end there…

From next week, up to five people can meet outdoors – regardless of how many households they come from. In another huge step, all restrictions on demonstrations will be taken back as early as Saturday (May 30). From Tuesday, larger indoor gatherings will also be permitted again. For now up to 100 participants are possible, until July the number of people allowed will be increased to 500. Other outdoor events such as concerts and open-air cinema screenings can take place with up to 150 people (from June 30 it will be 300).

For family gatherings such as weddings, baptisms or funerals the Senat wants to allow up to 50 guests. 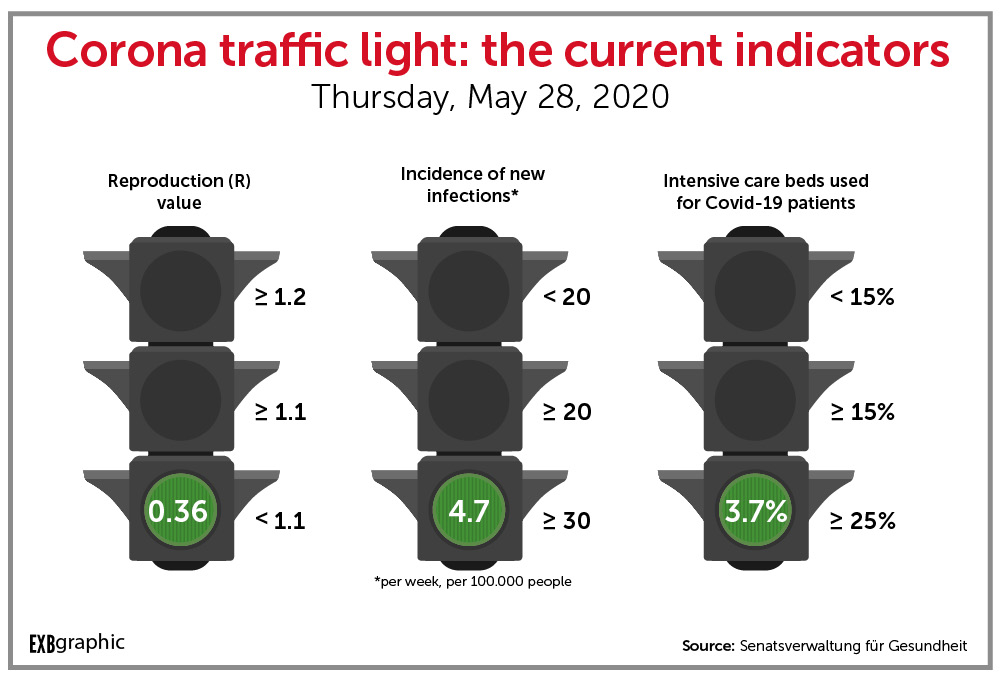 Financial aid for parents and restaurants and new announcements for schools

The Bundestag has extended the number of weeks for which parents can be reimbursed if they lost income due to a lack of childcare during the Corona crisis: It will soon be possible to apply for compensation of 20 weeks rather than six. The same bill also lowers the VAT for restaurants from 19 to 7 percent and makes employers’ supplements of the Kurzarbeitergeld largely tax free. The law must now be ratified by the Bundesrat.

The Senat’s education office has presented its plan for systematic Corona testing in schools, which had been announced earlier this month. Forty-eight classes in 24 Berlin schools will be tested for one year, the data will be used for a scientific study. The teaching staff of 24 schools will also regularly be screened for the virus. How often the tests will be carried out was not reported. Teachers who are worried they might have contracted the coronavirus can get tested even without displaying severe symptoms.

The city’s education administration has sent a letter to schools, informing them that teachers over the age of 60, pregnant colleagues and other teaching staff who so far have been considered at a higher risk from the coronavirus will have to return to school starting next week. A spokesperson told the Morgenpost this step had nothing to do with schools lacking teachers (of course not), but with a new Robert Koch Institute communication that suggests it’s not possible to identify at-risk groups. Teachers now need a doctor’s note to be able to work from home. 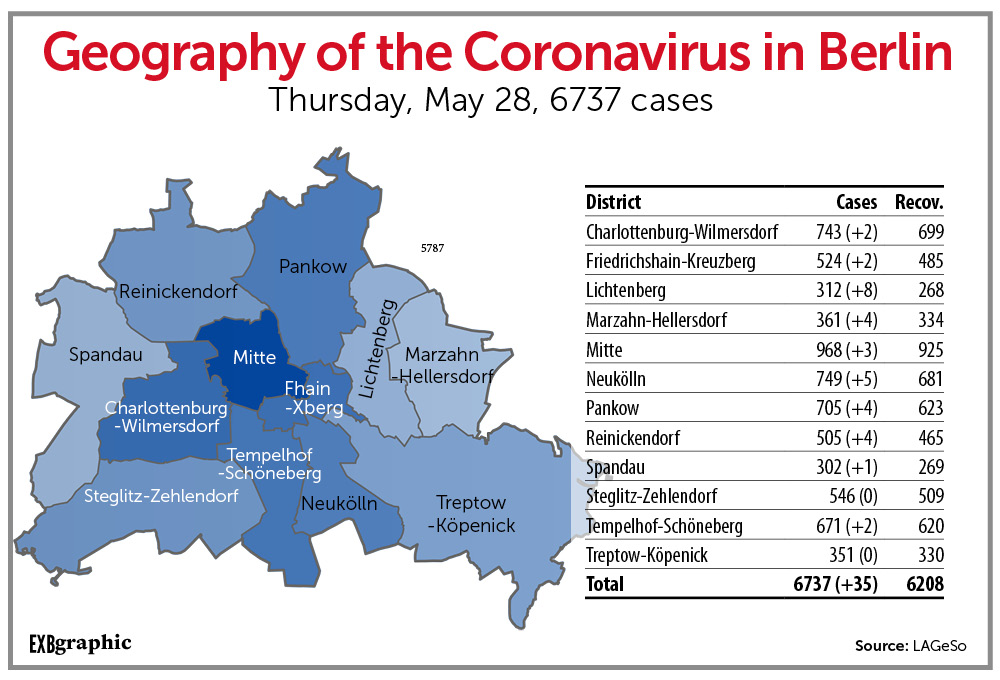 For those who have no job to return to and receive Hartz IV unemployment benefits, minimum pensions or support as asylum seekers, the Senat has extended the validity for the Berlinpass. Until August 31, even if the pass is out of date, recipients can use it to get reduced fares from the BVG as well as cultural institutions such as museums and now, potentially, open air cinemas.

More than 60 demonstrations have been registered for Berlin over the long weekend ahead, a police spokesperson told the DPA. The police is also anticipating a number of unannounced protests. Several demonstrations have been approved for Rosa-Luxemburg-Platz, Alexanderplatz, at Großer Stern and outside the Reichstag, including ones against the Corona-restrictions as well as counter-demos. Let’s see how many show up now that they’re allowed to!

Are Berlin’s many new ‘pop-up’ bike lanes legal? The FDP group at the Abgeordnetenhaus is not convinced and has ordered an audit. Only yesterday a new lane for cyclists was added on Frankfurter Allee. Friedrichshain-Kreuzberg mayor Monika Herrmann (Greens) has said the bike paths are there to stay beyond the Corona crisis because they are only speeding up plans the district had made in 2017. Meanwhile, a Reinickendorf counsellor told the Tagesspiegel the new pop-ups were not viable for the district, because car traffic was back to normal and likely even increased as fewer passengers are counted on public transport.