Senat discusses lockdown exit A few weeks ago it seemed the Robert Koch institute was the main authority when it came to assessing the Corona threat for the public. But now the Academy of Sciences Leopoldina, based in Saxony-Anhalt, is making waves as Merkel’s prime source of advice. Their latest round of suggestions, a step-by-step reboot of public life starting with kitas, primary schools and retail, were the topic of this morning’s Senat session. The outcome: the city government is sceptical about how much the suggestions are based on actual science but wants Senat administration to come up with a couple of feasible scenarios. [Keep up-to-date with our weekly quarantine newsletter.] Later this morning, Mayor Michael Müller told the RBB that he doesn’t believe lockdown measures will be lifted before April 27 or May 1. He said he was especially keen on lifting bans on demonstrations and political gatherings, religious services and retail. Whatever tomorrow’s federal decision will be, Müller pointed out that whatever adjustments are made must take into account the health system’s (limited) capacities. And, as he reassuringly put it: “Nothing will be as it was, if it is possible at all, it will be with restrictions and rules.” A lawsuit and a plea for one long summer One person who thinks there should be less restrictions and rules is FDP city MP Marcel Luthe, who has just sued the Senat over them. The Berlin constitutional court received his complaint today. Luthe says the rules are unclear, contradictory and lacking a clear explanation of their effectiveness – which he points out is problematic given their interventions in fundamental civic rights: “The main intention is first of all, that a clear legal situation is created so everyone can see for themselves what is being forbidden where and how.”  Bit late, but sure, why not have some clarification? Meanwhile, Pankow Mayor Sören Benn (Die Linke) has made it clear he thinks a step-by-step reopening of schools before the summer holidays would be “wrong”. He said such a step would put headmasters in an impossible situation and majorly stress out students and parents (“which will find expression in various forms of aggression”). Benn is pro e-learning and suggests mini-classes of five could meet for two hours a day, at school or in churches. But let’s be real, he’s not gonna get Education Senator Sandra “The-Abitur-will-take-place” Scheeres on board. 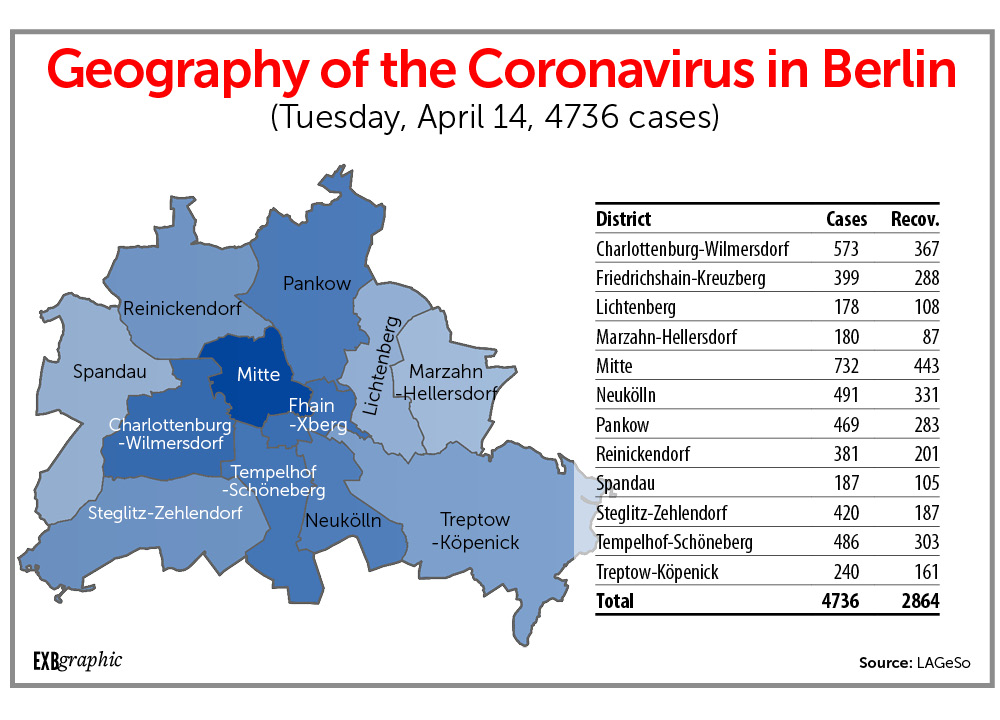 Masks galore It’s raining masks – finally! A whopping 2.5 million have been delivered today (including 100.000 FFP2 ones), bringing the total number of masks delivered over the past couple of days to roughly 5 million. A spokesperson for the Senat health office told the Tagesspiegel the goods have been flown from China and are meant primarily for retirement and nursing homes as well as medical personnel. Take that, mask thiefs of the world! While wearing masks is unlikely to be made compulsory at this point, Mayor Müller has said it could well become mandatory in certain situations. As an example, he mentioned hair salons. It would make sense, Müller thinks, for clients and hairdressers to cover their mouths and noses. And who doesn’t look better with half their face covered up? For anyone who hasn’t fashioned their own mask yet: don’t try coffee filters. Misleading information and photos on the internet have caused German brand Melitta to warn the public that their coffee filters are designed to hold back coffee grounds, not viruses. A Melitta subsidiary produces confusingly similar-looking masks, but the message here is: make coffee not Covid-19. (Or something like that.) Berlin snapshots: prisons, BVG and sweet 16 Berlin’s prisons are as empty as never before, the Tagesspiegel was told by the legal administration. Entire buildings are unused and effectively waiting to be made into quarantine quarters once the virus makes it behind the bars. So far, the report states, there is only one infected inmate who caught the coronavirus on temporary release. Now he’s not allowed back in! From today on, U-Bahn lines U1 and U3 are interrupted between Kottbusser Tor and Warschauer Straße. Work on Germany’s oldest underground track (which of course isn’t really under the ground here) is scheduled to take a whole year. The BVG are providing a replacement bus service which reportedly still allows proper social distancing. In other news, the public transport association VBB has announced they will not be refunding monthly tickets despite the pandemic. The passengers’ federation Pro-Bahn is furious that passengers are told to stay at home and keep paying their tickets. Whatever happened to #weilwirdichlieben?! How cool is it to get your 16th birthday party broken up by the police? Depends on the circumstances: A girl from Mitte was celebrating her special day with 31 friends in an apartment especially rented for the occasion. Someone called the cops on them and that was it – all 32 kids, the birthday girl’s mother and the landlord are being investigated for violating social distancing rules. The police tweeted: “If a girl together with 31 guests is celebrating her 16th birthday (…) unfortunately we aren’t stopping by just to say congratulations.”