It’s official: Shops can open again tomorrow. Technically, the retail space must not be larger than 800sqm but shops within malls are allowed to open their doors. There are no square-metre restrictions for book shops, bike shops and car dealerships, but overall only one customer is allowed per 20sqm and the 1.5m distance must be observed everywhere.

Next to open: the Zoo and Tierpark on Satuday. And you won’t believe it: From Monday on, the Spielplätze will reopen – along with sports fields (only for solo athletes and tennis players, team sports remain prohibited). Then, from May 4, small gatherings of up to 50 people will be permitted outdoors if distancing rules are observed. This includes demonstrations and religious services. Museums and libraries will also be back from May 4, a week earlier than was expected.

Masks: The Senat has decided to make wearing masks compulsory on public transport. But the rule will not be enforced and Mayor Müller has said that you can just use a scarf if you can’t get a mask. They’re still calling it a Pflicht, though, so don’t get confused! Müller said wearing a mask is, at best, a second-rate solution, and that keeping one’s distance is still safest. In shops and when in contact with vulnerable people, the Senat has given out a strong recommendation to cover mouths and noses.

Not everyone can look forward to reopening these days: Restaurants will have to keep doing delivery or takeout as there is no opening date in sight for them. Clubs and theatres will have to stay closed until July 31 – so that’s this Spielzeit ruined by the virus. It’s hard stuff to stomach for Berlin’s stages, but the Friedrichstadtpalast has posted a video of “the world’s longest kickline”: 193 members of staff, dancers and their families have filmed themselves solo-kicking and the clips have been compiled in a video. Watch it and let us know how inspired you are to get more flexible (please mind your furniture):

Also still banned, until October 24, are events with 5000 or more people. This includes the Berlin Berlin Marathon, which has to be cancelled despite the organisers’ recently voiced hopes. In the same category are, of course, big football matches, but a Senat spokesperson has told the DPA they would allow Bundesliga matches for Hertha BSC and Union Berlin behind closed gates at Olympiastadion and Alte Försterei. On Thursday, the German football league will decide whether they’ll go with this sad but pragmatic option.

Lonely ‘Tulipan’: Like every year, Britzer Garten has prepared its grand tulip show with 200,000 flowers of some 200 varieties. However, the botanic beauty will not be accessible to the public because the park’s narrow paths don’t allow for proper distancing, operator Grün Berlin has stated on their website. This year, tulip enthusiasts will have to rely on social media to stop and see the flowers. Other areas of the park remain open, so you might also catch a glimpse from afar.

The Federal employment agency’s regional coordinator has told the Tagesspiegel that the first Kurzarbeitergeld was paid to companies at the end of last week. More than 30,000 Berlin companies had officially reduced staff hours and applied for the government to support them with 60 percent of the net  wages. Most of them, however, are still waiting for the payments. The agency said they were were swamped with the applications, but would continue to process them.

As of today, anyone who’s had to quarantine themselves or are not allowed by the health offices  to carry out their job during the pandemic can apply to the city for compensation. The interior and finance Senat offices have pronounced the service portal open. The money for this compensation will come from an extra €3 billion budget the Senat passed two weeks ago.

It turns out, though, that it makes sense to find out what you apply for before you fill in the forms: 2500 people have returned the Soforthilfe they’d received by the Berlin investment bank IBB. They’ve told the Morgenpost that, so far, €17 million have been paid back after recipients realised they were not actually eligible for the money. (If you’re a freelancer or small entrepreneur and unsure whether you can actually keep the €5000-9000 you’ve been given, we’ve interviewed a taxpert for you!) 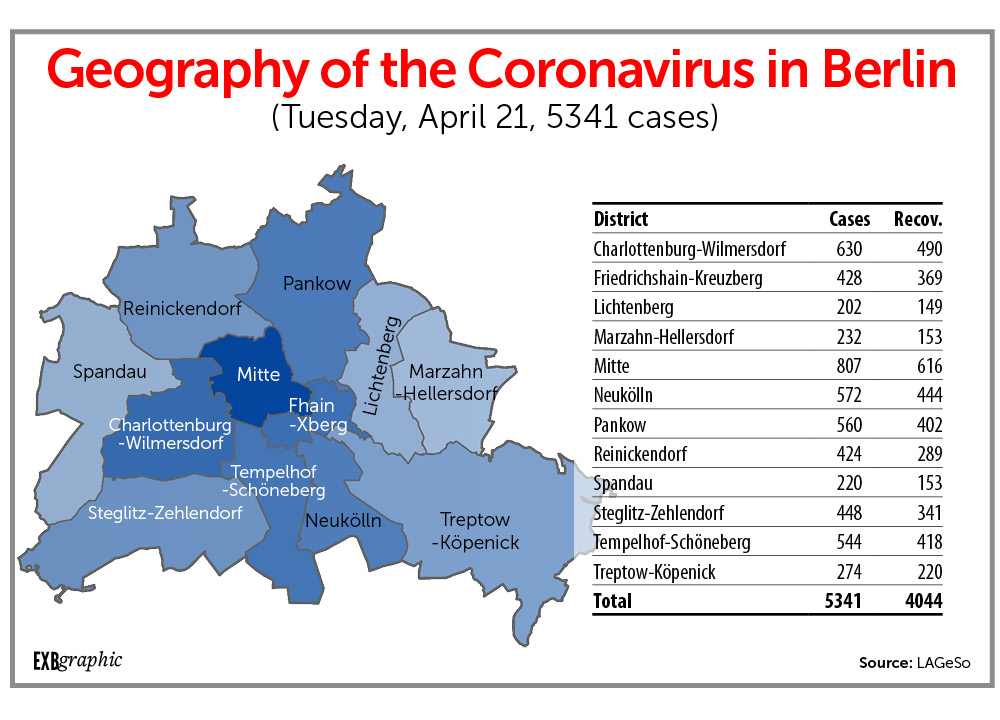 Education Senator Sandra Scheeres (SPD) has come up with a way to support some families (9500 to be exact) whose kids don’t have the tech to keep up with e-learning while schools are still unable to fully reopen. The Senat will hand out tablets – but will ask for them to be returned once the crisis is over and the kiddos back in front of the good old blackboard. Well, at least it’s something!

Berlin MP Marcel Luthe (FDP) has lost his court case against the Senat’s Corona measures. He had claimed the restrictions were limiting his ability to assume his mandate at the Abgeordnetenhaus because police could potentially stop him in the street and question his reasons for not staying at home. He also claimed such an incision in fundamental rights could only be made by law, not a lousy little decree. The court seemed to think he was overreacting and reassured him that flashing his MP pass would surely get the police off his back on his way to work.

Last night in Marzahn, the police found nine drunk people dancing around a campfire tauntingly shouting “Corona! Corona!”. Needless to say, the little party ended right there and then. The police tweeted about the incident today because, lets face it, this shit was just too good/bad not to share!