That’s it, no more mask-free shopping. The Senat decided today that, from tomorrow Berliners will have to wear their Alltagsmasken not only on public transport but also when entering any shops. Senator of the Interior Andreas Geisel (SPD) said the city government was encouraged to take the step (Berlin is the last German state to prescribe masks in shops) because it’s going so well on public transport. Well, he probably had to say something, right? And people seem to be in favour, too: A survey carried out by Infratest Dimap for rbb’s Abendschau found that 60 percent of Berliners wanted the extended Maskenpflicht.

Exempt from the new mask rule are children under the age of six (as per the Green party’s request). That’s understandable (it’s hard enough making them wear their pants!), but is it safe? In his NDR podcast (episode 36), Charité’s star virologist Christian Drosten said he was researching the concentration of the coronavirus in children’s throats and how they spread the virus. Apparently, kids can harbour up to 10,000 times more pathogens than adults. Something about their undeveloped immune systems. Yuck!

Senator Geisel said city government is also going to discuss making masks compulsory in care homes. Last night an entire retirement home in Lichtenberg had to be evacuated because 28 of around 100 residents tested positive for the coronavirus. Seventy firefighters were deployed for the action. The management of the home’s service provider assumes the outbreak was due to some residents not staying inside the home as recommended. Geisel said the Senat’s debates had not been impacted by the news because too little was known at that point.

Berlin Investment Bank IBB had to halt the application process for the Corona Soforthilfe programme for freelancers and small businesses because a fake site with a similar URL was found online. IBB warned potential applicants that criminals were possibly trying to steal their data. At around 4pm IBB reported the fake site had been blocked and their online application forms were back up. It’s unclear who was behind the fake and whether they managed to steal information.

As of today, the Zoo and Tiergarten are open again – for those who managed to buy a ticket online. Yesterday afternoon the ticket shop went live, but apparently the site collapsed because of the high traffic. Zero traffic (except for on the tracks) is to be expected at Hoppegarten’s first horse race of the season on Sunday, May 10: no live audience permitted! Another reopening date has been released for the city’s public libraries: they will be back on May 11, meaning books and other media can be taken out or returned while desk areas remain closed. 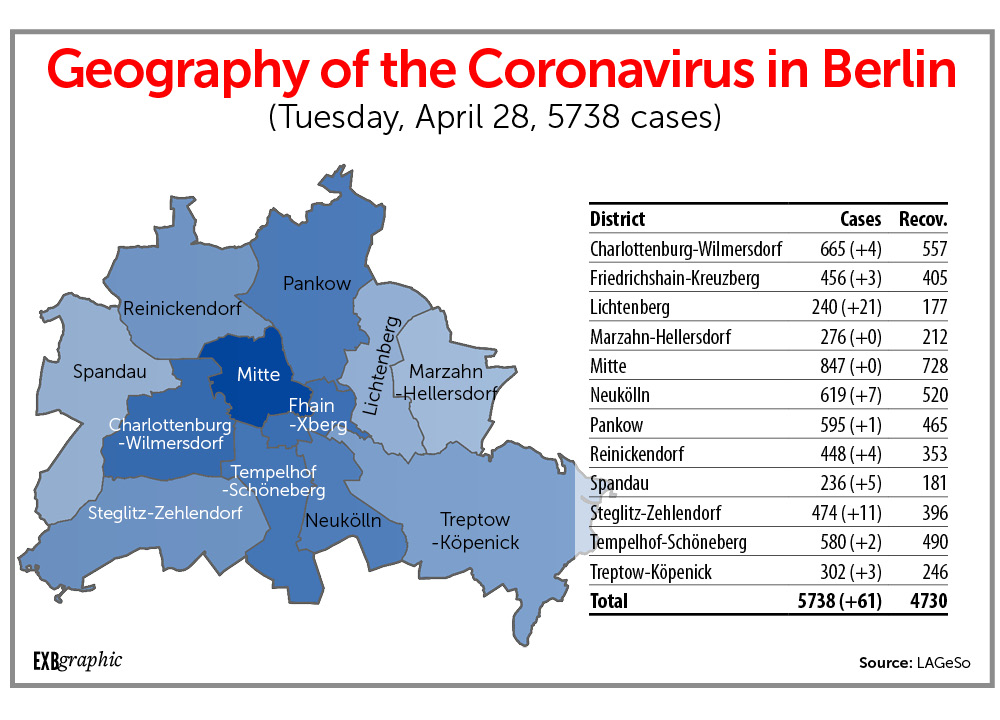 Senator Geisel has said that while the BVG is not checking whether their passengers wear masks, controllers are actually handing out a limited number of them. He didn’t say how many masks they would give away or when, so when anyone sees them, please take a selfie for the record and send it to us!

Meanwhile Treptow-Köpenick is encouraging people to DIY their masks: Residents of the Kosmosviertel can now pick up sewing sets containing material for five masks at Kiezladen WaMa (Ortolfstraße 206 B) and the kiez’s offices at Schönefelder Chaussee 237. The bags are placed outside the door to be picked up (one per person) and the plan is to also make them available in kitas, refugee homes and other locations. What a great way to encourage Altglienicke residents to learn some life skills!

The district of Friedrichshain-Kreuzberg is asking Berliners to help realise the plan of closing off streets for children to play there on Sundays and public holidays between noon and 6pm. They are looking for locals to oversee activity on the streets and remind everyone to observe the safety distance. There’ll also be tank lorries or hydrants so everyone can help water the wilting vegetation. And the award for most utopian Bezirk goes to…