The post-Pentecost week sees more anti-Corona restrictions lifted: Despite the R value’s rise to 1.95 (“red” on the Senat’s traffic light assessment scale) after the long weekend, bars and Kneipen are allowed to reopen their indoor spaces until 11pm, provided guests sit at safely distanced tables (some places are thinking twice as the remaining rules may make reopening unprofitable for some, as is the case with restaurants). Workout options multiply as gyms and dance studios are back and up to 12 people can train together. Open-air cinemas, casinos and betting shops are free to open again and religious folk can gather in congregations of up to 200 people.

Though many a Berliner may have missed their gym, the current weather makes the great outdoors more attractive to many. Case in point: tickets for outdoor pools including Kreuzberg’s Prinzenbad, Neukölln’s Columbiabad and Wilmersdorf’s Sommerbad sold out quickly for today and Wednesday, June 3. The Freibad Wannsee and Bad am Olympiastadion were also gone in a flash. If you want to go for a swim, try off-peak hours in Spandau or Gropiusstadt – or wait for a less summery day later in the week.

More alfresco fun is to be had at open air cinemas, which are back tonight (check out our guide to the best screenings ahead). Yorck has announced that the Arte Sommerkino will return to Kulturforum from June 12. As usual there are a bunch of OmU and OV screenings on the menu, so between all the city’s outdoor screenings there should be plenty of tickets to hunt online. 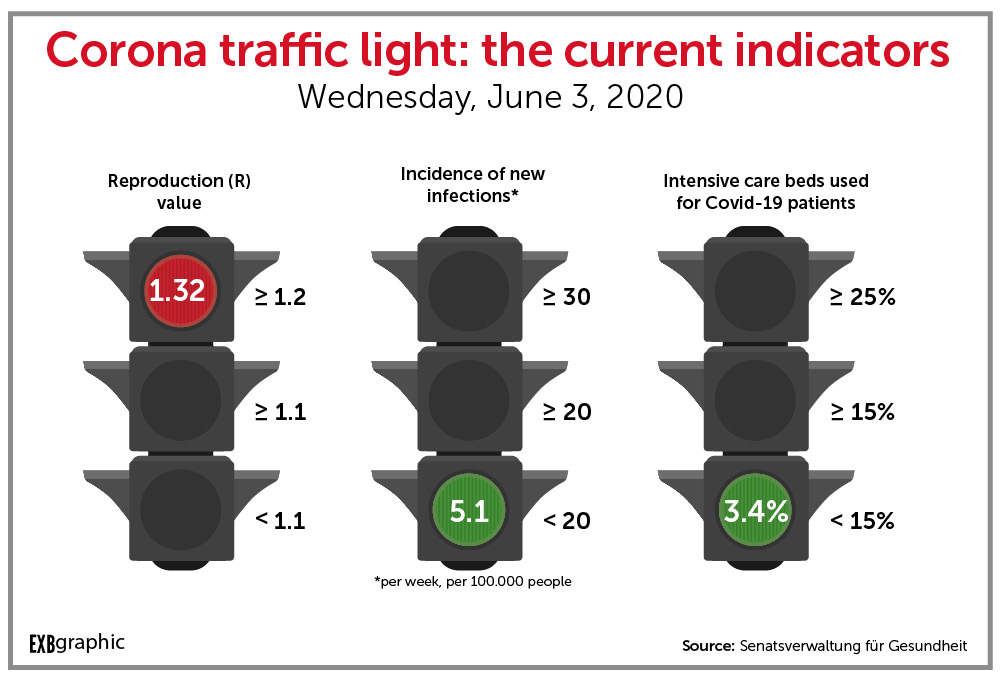 Berlin Health Senator Dilek Kalayci (SPD) has expressed shock over Sunday’s Landwehrkanal rave in support of the city’s club culture, the images of which she fears will be shared around the globe. In a video message she said that “times of pandemics are not the time to party” and defended the Senat’s decision to keep clubs closed as potential infection hotspots and reminded everyone that the 1.5m distance rule is still valid, despite other measures being taken back. The solidarity rave has clearly backfired – big time.

Kalayci also tweeted that “We still need to get ready for a potential case of emergency. To combat the coronavirus the tracking of contacts is essential.” To help the local Gesundheitsämter track potentially infectious contacts, 60 Bundeswehr soldiers will come to the rescue, the Senat’s health department announced. Lichtenberg and Friedrichshain-Kreuzberg have signalled they’ll be opting out, a step the Health Senator says she doesn’t understand.

The mass testing planned by Federal Health Secretary Jens Spahn (CDU) will come with a hefty price tag, the Krankenkassen have calculated: If 4.5 million people are to be tested every week, €7.6 billion will have to be spent by the end of the year. Spahn’s plan is to make public health insurance pay for the tests, but they warn that even before these new expenses, they’re facing a tense situation.

A socially distanced chain of environmental activists assembled to protest outside the Kanzleramt, from where Angela Merkel headed a government meeting on an economic stimulus package which might include subsidies for the automobile industry. Fridays For Future, who also held a rally at Brandenburger Tor earlier today, said that 2000 activists joined the chain, while police counted 1600. The results of the government debate has not yet been announced.

As international air travel slowly picks up again, and just when it seemed Tegel Airport was nearing its final hour, Berlin airport manager Engelbert Lütke Daldrup has ordered a check on whether Tegel could remain open beyond June 15. “We have to be able to satisfy the airlines’ demand at any point – and that’s what we want to do,” Lütke Daldrup said. Guess we’ll be waiting for the next installment of the “Berlin airport tales”.

Heard or read about all those people stockpiling condoms during lockdown? Well, here’s the deal: The DPA spoke to manufacturers who said that, yes, there was some stockpiling and more orders online, but not more condoms than usual were used. Sounds strange initially but then 20 percent of johnnies in Germany are used in the sex work industry – which has been down since the virus hit. So, while professionals have been out of work, everyone else was… at least expecting to get it on more often.