The Senat convened today to discuss at what point restrictions would have to be put back in place, and how many infections per week would be too many. The German government and federal representatives decided last week that 50 per 100,000 would be the turning point. But Berlin’s Senator of the Interior, Andreas Geisel (SPD), said this number is way too high for a city like ours. The result of the meeting: There’ll be a ‘traffic light system’ combining the three factors of “R” value, the number of available hospital beds and the total number of new infections.

Despite the stable situation, Mayor Müller (SPD) said that Berliners should not expect too much too soon when it comes to further peeling back anti-Corona measures. “There is no indication of an all-clear,” he said. It shouldn’t be taken for granted that all restrictions will be lifted in June. The Senat would have to discuss plans for cinemas and fitness studios, for example. Müller explained that cinemas especially will have to wait for a while longer, in part because it’s so hard to check what happens in dark screening rooms. Kss, kss, kss! 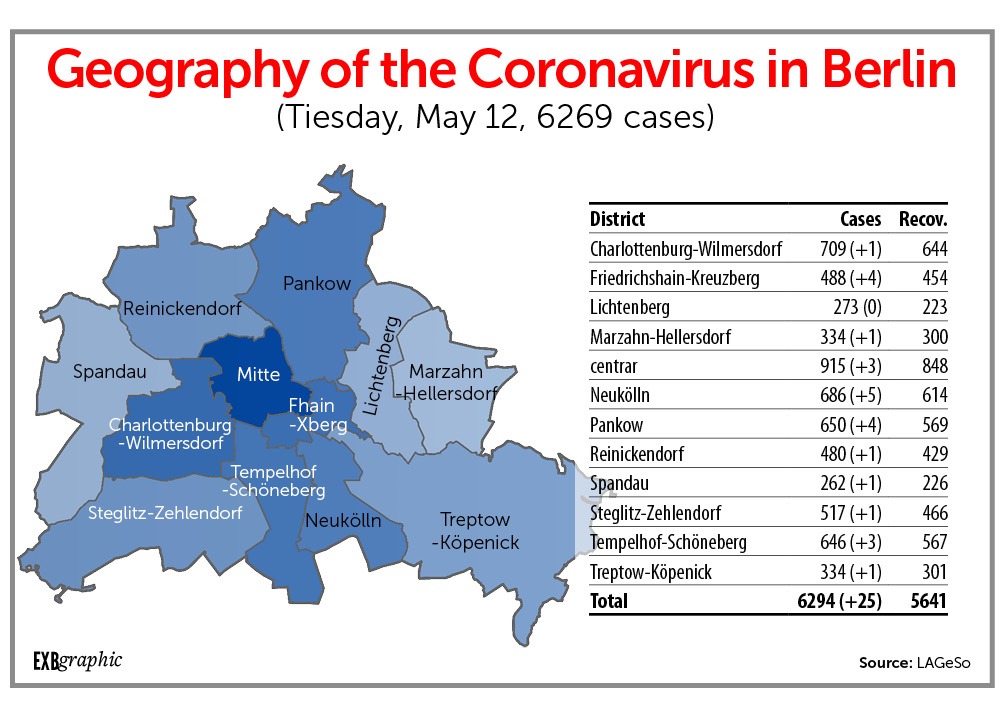 The Senat has concluded that it will be difficult to increase kita capacities quickly, because staff is limited. Mayor Müller said they were facing the dilemma that contact still needs to be restricted but parents needed and wanted to go back to work. “In Berlin we are quite far ahead with more than 40 percent of the normal day care capacity,” Müller said after today’s government session. “Other Bundesländer have a long way to go to get to this stage.”

The city’s administrative court has decided that making masks compulsory in shops and on public transport was lawful. The court acknowledged the interference with the personal right to Entfaltung (development, self-fulfilment), but was justified with the goal of keeping down the number of new coronavirus infections . The court further said it was justified for the Senat to rely on the Robert Koch Institute’s expertise when making its decisions. Several people had complained about city-mandated mask-wearing.

Charité has been having new frustrating mask problems. Several deliveries of FFP2 and FFP3 masks have turned out to be of inferior quality and not fit to protect health workers. A fake CE label had raised suspicions, so the Charité had 21 different models lab-tested, two of them did not pass the check and a recall was issued. A spokesperson said these masks had been ordered at a time of great shortage. Where the masks were from and how many had been handed out and used is not clear.

Museumsinsel began to reopen its exhibition halls today: Alte Nationalgalerie, Altes Museum and the Pergamon Panorama can now be visited again. On Kulturforum on Potsdamer Straße, the Gemäldegalerie is back and the Kupferstichkabinett is showing Pop on Paper with works by Roy Lichtenstein, Andy Warhol, Sigmar Polke and many more. The museums had all been closed since March 14.

Neukölln is to get a drive-in cinema on the Estrel hotel’s car park on Sonnenallee. The Tagesspiegel reports the retro location is supposed to be up and running in June and also host concerts, religious services and, potentially, bingo nights. You’ll never guess who came up with this: rapper Sido and his Kollege Alligatoah! They’d played a concert in a Düsseldorf drive-in. It was picked up by artist crew Dixons who said they won’t insist on cars: skateboards or bikes will be welcome, too, as long as everyone practices social distancing.

Free e-scooter rides for BVG subscribers? Anyone with a personal BVG monthly, annual or job ticket can now unlock 40 scooter rides with partner company Tier. The catch? They still have to pay the per-minute rate of 15 cents. Oh and you have to hand over your data. And it’s only valid through May 31. Unless you use them a lot (in which case the offer saves you €40), we don’t think it’s worth it.