A week after the introduction of the Senat health department’s controversial Ampel warning system for new Corona infections, Berlin’s R rate has increased from 0.79 to 1.07. This means that a Berliner infected with the virus passes it on to 1.07 people on average (so 100 infected people would infect 107 people, who would then infect 114 people, and so on). Doesn’t sound too good, especially compared to last week, but as far as the Ampel is concerned, the lights are still green, meaning there currently is no danger of a renewed lockdown.

Meanwhile, the Senat has agreed on a new testing strategy, developed with the help of Charité and Vivantes experts. As soon as the legalities and questions of data protection are sorted, representative and regular spot-checking is to commence among people without symptoms but a lot of customer contact. The same goes for care homes, kitas, schools and health care workers. All patients admitted to hospitals are to be screened as well and additional testing centres will be set-up so all districts are covered. The results are to be fed into a central database and be anonymised to be used in further research.

According to Tagesspiegel information, the school and kita tests will be carried out randomly by mobile teams on 40 kids and 10 teachers per school/kita. One legal guardian has to be present when the testing is done on a child, parents have to agree to the testing and can get checked themselves. The tests will consist of nose and throat swabs and taking blood samples for antibody screening. The procedure is to be repeated every three months. The Senat has appointed a task force to coordinate the effort, headed by the Charité’s Dr. Valerie Kirchberger. 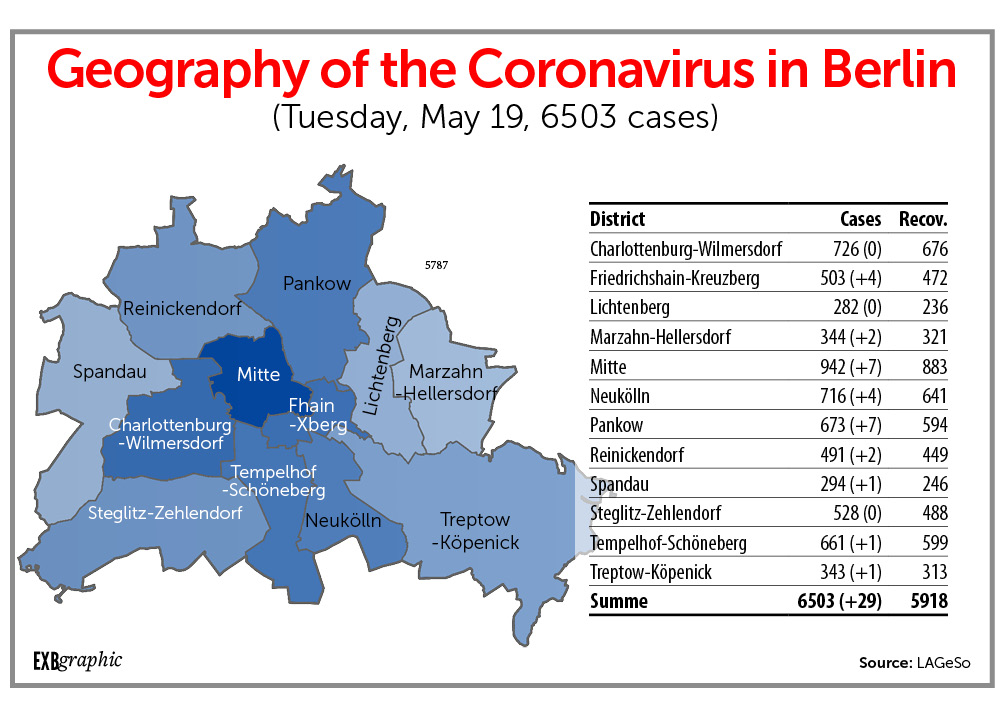 Travellers coming from inside the EU no longer need to go into a compulsory two-week quarantine, city government decided today. In fact, Senator of the Interior Andreas Geisel (SPD) said the new relaxation extends to Iceland, Liechtenstein, Norway, Switzerland and the UK. The compulsory quarantine was in effect from the beginning of April and so far only diplomats and other key professionals were exempt from the rule. Hotels, which will reopen next week, will be glad to hear the news.

When it comes to dining out(side), the Senat has said it wants parking spots and streets blocked for restaurant use, and while Friedrichshain-Kreuzberg are already implementing this idea, the city’s largest district, Pankow (which includes restaurant-packed Prenzlauer Berg), has said there will be few exceptions like that – mainly because virus precautions are still limiting the authorities’ resources and individual street closures would need to be reviewed and approved. Meanwhile requests to put out more tables on the pavement would be reviewed favourably, the councillor in charge said. The strategy won’t go down well with the district parliament, which is demanding more space for pedestrians and cyclists and accusing town hall of too much bureaucracy and too little action.

When it comes to implementing the strict guidelines under which restaurants are allowed to operate these days (if you haven’t already, read our report on how it affects them), the Ordnungsamt says it’s hardly seen any violations. Even the Neukölln branch declared they had checked 60 eateries and found no clashes with the prescribed precautionary measures including a strict 1.5m distance between seats of different tables and the rule that only members of two households may sit together. Really? To us Neukölln restaurants have been looking so packed (especially on the weekend) it’s hard to believe.

School news: The Abitur is pretty much done and dusted. Today about 4000 students took their final exams in geography and history. The Senat’s education office said the finals had gone over well, despite the pandemic. Hygiene and safety rules had generally been adhered to and the number of students on sick leave was between one and five percent (in previous years it had been between one and three). Resits are scheduled until early June. Now let’s hope results are as much cause for celebration as attendance!

A week after Altes Museum, Alte Nationalgalerie and the Pergamon Panorama have reopened alongside the Gemäldegalerie and the Kupferstichkabinett’s special exhibition, the museums have released the first round of visitor stats: Since May 12, they have counted more than 10,000 visitors, which they say is 43 percent of what they had during the same period last year. New time slots until the end of June are now open for online booking.

And options for visiting Berlin attractions are growing: From Friday on, the TV tower will be open again – including the viewing platform and the restaurant. Visits must be booked online and are limited to 45 minutes for the platform and two hours for the restaurant. Sounds like it’s a good time to go now, as you won’t have to queue.