Senat to the rescue: retail, heroes and more money for culture

That’s it, Mayor Michael Müller (SPD) has said all restrictions on retail will likely be lifted by tomorrow afternoon. Speaking to the DPA about a Senat session scheduled for tomorrow, he said the 800sqm rule would be scrapped – meaning stores of all sizes can reopen, and no more difference will be made between hardware and furniture stores: “They can all open, even a warehouse can open.” Distancing and the limit of one customer per 20sqm will remain in place according to Müller.  The first steps on the path to reopening restaurants can be expected next week, he said.

The Senat has decided today that 25,000 Berlin Corona heroes – mainly public employees such as police, firefighters and cleks who accepted health risks at work – will receive a €1000 bonus. Criticism is now coming from many sides: even Police union GdP is furious because the bonus is financed using money set aside for public servants who were supposed to receive a monthly €150 of the so-called Berlinzulage starting this autumn. The FDP said it wasn’t fair to give the money only to public servants, whose jobs are secure anyways.

Other Senat beneficiaries of the day include small-ish to medium companies from the cultural and media spheres: From Monday through Friday next week, these businesses, as long as they have more than 10 employees, less than €10 million annual turnover and can prove Corona-induced liquidity problems, can apply for up to €25,000 from the Berlin investment bank IBB. This applies to, for example, theatres, private museums, larger cinemas, clubs, festivals and publishing houses. (Too bad EXB is too small to get in!) Also getting more support are the BVG: Commerce Senator Ramona Pop (Greens) announced they would be getting at least another €250 million by 2025. 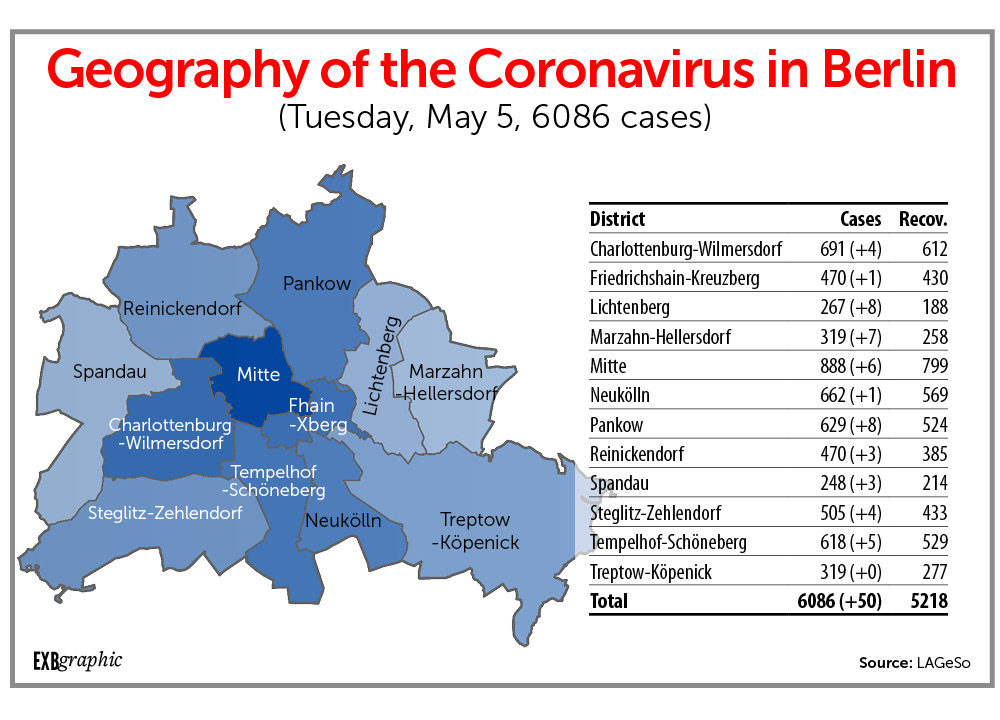 Got an email from the IBB demanding further information about your financial status? This could be a fake sent by fraudsters trying to steal data. The sender(s) are warning recipients that wrong information is punishable by law – making use of many Berliners’ confusion about who qualifies for the city’s small business and freelancer emergency cash. So be careful who you send your bank details to and feel free to re-read our taxpert explainer interview!

The Berlin CDU is demanding the Senat waive rent payments for city-owned buildings by shops and businesses for the lockdown time. The group’s spokesperson for economic matters, Christian Gräff, said the CDU would start a parliamentary initiative to that effect, “because how are the businesses supposed to pay [the rent] back for a period during which they practically didn’t make any money?”

Anti-car protest: Several organisations including Fridays for Future, Campact and Greenpeace have protested outside the Kanzleramt, where the federal government was hosting a video conference with car manufacturers and union IG Metall to discuss potential car-buying incentives. The decision is supposed to come at the beginning of May, but protestors with masks and banners still voiced their disbelief today. FFF’s Luisa Neubauer tweeted: “I can’t believe we seriously have to protest against a #Abfckprämie (fucking car bonus). For weeks they’ve been celebrating ‘Corona as an opportunity’ [for greener mobility]:”

Museum island comes back to life: From Tuesday, May 12, the Alte Nationalgalerie, Altes Museum and the Pergamon panorama outside the Pergamonmuseum will reopen to the public after having closed on March 14. On Kulturforum, Gemäldegalerie will open with “Pop on Paper” with works by Lichtenstein and Warhol. Tickets must be purchased online and visitors have to wear masks inside. Open as of today are the Botanical Garden’s outdoor areas as well as the Sachsenhausen concentration camp memorial.

Years 6 and 9 to 12 are back in school and Neukölln health counselor Falko Liecke (CDU) is expecting the number of infections in his district to go up again as restrictions are being taken back – especially in institutions like schools. But, he assured Neuköllners, the administration is ready to quickly test entire years for Coronavirus. Liecke proudly pointed out the efficiency of the district’s drive-through testing centre which already carries out 50 tests per day in 10 minute intervals. It certainly will be a new kind of testing for local schools.

Football club Hertha BSC has said good-bye to its jokester Salomon Kalou. The 34-year-old athlete posted yesterday what Mayor Müller called “proper imbecility”: an Instagram live video in which he gave high-fives to his team mates and showed a Corona swab being taken from another Hertha player. The incident had shown football in a not-so-great light ahead of the Bundesliga start. One user on social media appropriately commented: “Negative test result? What for? Intelligence?”