Latest government announcements and police report After a long video conference with the heads of the German Bundesländer, Chancellor Angela Merkel announced the contact ban would be extended until at least May 3. She explained that people must continue to stay 1.5m apart and must only be seen outside with one other person, or with members of their own household. Merkel also said that schools could be opened step by step from May 4, starting with final year students, small classes and strict safety plans. Shops with less than 800sqm (sorry Dussmann and Saturn!) and hairdressers may reopen as early as next week if they observe strict hygiene standards. Religious gatherings will remain banned as well as “large events”, which are not allowed to take place until after August 31. It’s up to the individual states to implement the rules. Merkel said the next government strategy meeting will take place on April 30 to decide the next steps.    It seems likely Berlin will stick to its current safety measures, but there are not the Senat’s statements yet. What we do have already is the police review of four weeks of lockdown: Since March 14, they have carried out 2301 checks on buildings and 7388 outside. In 873 cases, places had to be closed and a total of 1067 crimes were counted and, since March 23, 1628 violations of the anti-Corona measures were fined. The police say it’s looking fine overall, with slight variations depending on the weather.   Berlin Health Senator Dilek Kalayci has endorsed the wearing of masks among the general public “especially in public spaces, such as supermarkets or the U-Bahn. That way we can better protect high-risk groups.” At her press conference today, Chancellor Merkel confirmed that all German states were strongly recommending the same approach. Merkel said if many people wear masks, they will not only protect others but ultimately themselves. She added that new masks continue to arrive every day. Berlin economy in big trouble It’s not looking good for our local economy: Trade association IHK Berlin has reported a steep drop in the city’s economic climate index (from 125 points in January to 60 now), indicating a hit heavier even heavier than the 2008 global financial crisis. They said only 23 percent of Berlin companies reported ongoing good business. For 41 percent things were going very badly, while a third were planning layoffs. Meanwhile, many shops, restaurants, fitness studios and other businesses are hoping they will soon be able to reopen. Before Merkel announced today’s decisions, gastronomy and tourism association Dehoga said measures would need to be lifted in a way that enabled businesses in the sector to survive: “Opening hours until 6pm for restaurants and beer gardens, for example, would not guarantee that.” The CSD organisers have said they are “disappointed” they will have to move their July parade online, but that “the protection of human lives is more important”. For companies fighting to overcome the pandemic’s challenges, a new online platform has been created: unternehmer-helfen-unternehmern.berlin allows, as the name suggests, for businesses to offer each other support. So far, 100 offers have been made on the site, including discounts for print and video products, free IT classes, Instagram support and help with applications for government grants. Way to go! 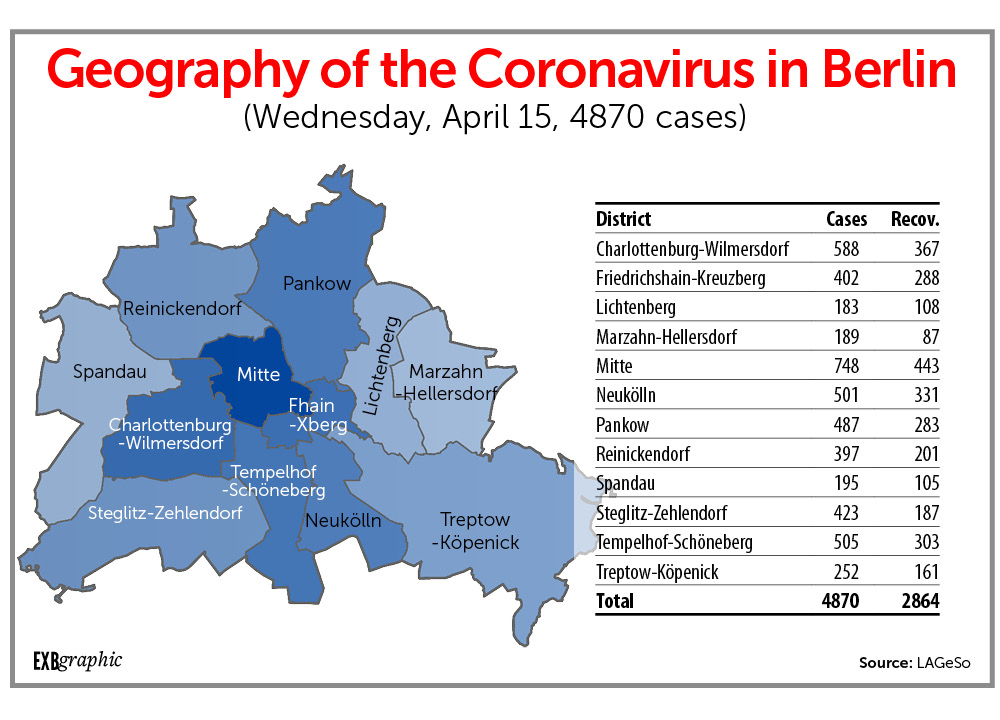 Viral debates: Abitur, Corona app, BVG tickets Did extreme left-wing activists set fire to electricity and internet cables to protest against the development of a Corona app? The fire, which heavily damaged local supply lines, happened yesterday in Charlottenburg’s Franklinstraße. Today the police announced their special unit for politically motivated crime was investigating the case. Activists claimed responsibility on indymedia, saying an app the government is developing to track coronavirus infections would dilute fundamental rights. The app is supposed to be introduced on a voluntary basis but will likely be a hot-button topic. This year’s Abitur presents a bone of contention – at least in the Hauptstadt. Last night Mayor Müller underlined the exams would take place, but today the headteachers of Berlin’s so-called integrated secondary schools (ISS) joined forces with the students’ association, demanding that 10th grade MSA exams be skipped and a legal basis secured for alternative ways of calculating Abitur marks. The Gymnasium teachers’ organisation, on the other hand, seem to have given up all their summer plans, suggesting new exam dates during the summer holidays. Berlin’s Die Linke party is with the students and ISS heads, demanding all MSA and Abi exams be dropped. Sooo… what are we doing? Following the announcement that public transport providers would not reimburse ticket holders who are staying at home these days, the Berlin CDU has criticised the BVG for their poor customer service. The party’s traffic expert, Oliver Friederici, suggested retroactive offers, such as halving the abo price for next month or making public transport free between Christmas and New Year’s Eve: “Where creativity is concerned, the sky’s the limit.” Berlin snapshots: airport news, balcony fitness and zoo animals live another day Here’s a headline nobody was expecting: The head of Berlin’s airport association has said Corona will make opening BER easier! Why? Because there’ll be much less traffic than expected, duh! “The opening will not happen under full stress.” The new terminal still needs to pass its security test. though – the full stress version. The date has been moved from April 29 to this summer. As soon as there’s a new date, volunteers can sign up here. After the shocking news that a Schleswig-Holstein zoo is considering emergency slaughters due to a lack of revenues during Corona closure, Berlin’s Zoo and Tiergarten have promised to not lay a finger on their 30,000 beasts. Despite losing €140,000 every day, a spokesperson said they’d rather cut back on planned investments and construction work. Good to know that Pit and Paule are not going to end up in some rare panda BBQ takeaway! For anyone who is lucky enough to have a balcony looking out on Mitte’s Vinetaplatz (and some time on their hands in the middle of their Wednesdays), there is a new initiative: Balkonsport im Brunnenviertel. The daft slogan: “Together against boredom!” – Really?! Anyway, it does sound fun. Just step out at 11:00am (Swinemünder Str. 95, Demminer Str. 12/13) 11:30am (Vinetaplatz 7 – 9, Stralsunder Str. 1, Ruppiner Str. 30)  and trainer Ieva of BWGT e.V. will kick your privileged butt.