Shops were able to open their doors again after weeks of involuntary Corona ‘holidays’. But Berliners refrained from going on a mass shopping spree right away. Ku’Damm and Alexa remained equally quiet with only a few shoppers making use of their newfound retail freedom. Streets were not much busier than usual as cafés and restaurants remain closed or offered takeaway only.

Speaking of restaurants: The hotel and restaurant association Dehoga has complained about the latest Senat decisions, which lifted some of the restrictions but gave no indication whatsoever about when restaurants, bars and clubs could reopen – not even a “soft opening date”. Berlin Head Thomas Lengfelder predicts a “tsunami of unemployed” workers if no measures are taken to help the industry.

Official correction: Anyone hoping to Zoo or Tierpark must wait until April 28, not this weekend as was reported yesterday. As only the outside areas will be accessible, there is no chance to see the panda babies just yet. Tickets will have to be purchased online and are limited to 2000 per day for the Zoo and 3000 for the Tierpark. Two metres of distance must be observed and visitors are not to linger in one spot for too long. Hey, better than nothing!

Only days after the Senat announced its plans to have schools carry out both Abitur and MSA exams, Education Senator Sandra Scheeres (SPD) has announced the 10th-grade final examinations will not take place after all – at least not the written exams. One oral exam per student is still on the cards. Scheeres said they’d “weighed up all the arguments again”. That’s good thinking! Instead of exams and corrections, students and teachers are to focus on as many lessons as possible.

Planning the reopening of schools remains tricky. CDU expert Thorsten Schatz pointed out that if all students are supposed to wash their hands for 30 seconds in a five-minute break, there just aren’t enough sinks for that. He is suggesting “mobile faucets,” which sounds fun for the summer months but will it be the solution? Stay tuned!

The Education Senator has made more headlines today. She is proposing to increase emergency childcare by granting it to families with ‘only’ one parent working in a job considered of systemic importance while also expanding that category to include professionals such as speech therapists, dental technicians and air freight personnel at airports. Meanwhile, the Berlin parents association is complaining because they are not being included in the decision making process. The Senat had said yesterday that kitas would open before August 1, without giving out a new date.

More news from Sandra Scheeres: The Senator has called for the Bezirke to open their playgrounds. She said child care services and families needed them as an outdoor refuge and that there should at the very least be some sort of partial reopening. The district mayors will discuss the matter tomorrow, so make sure to come back for more Spielplatz news then. 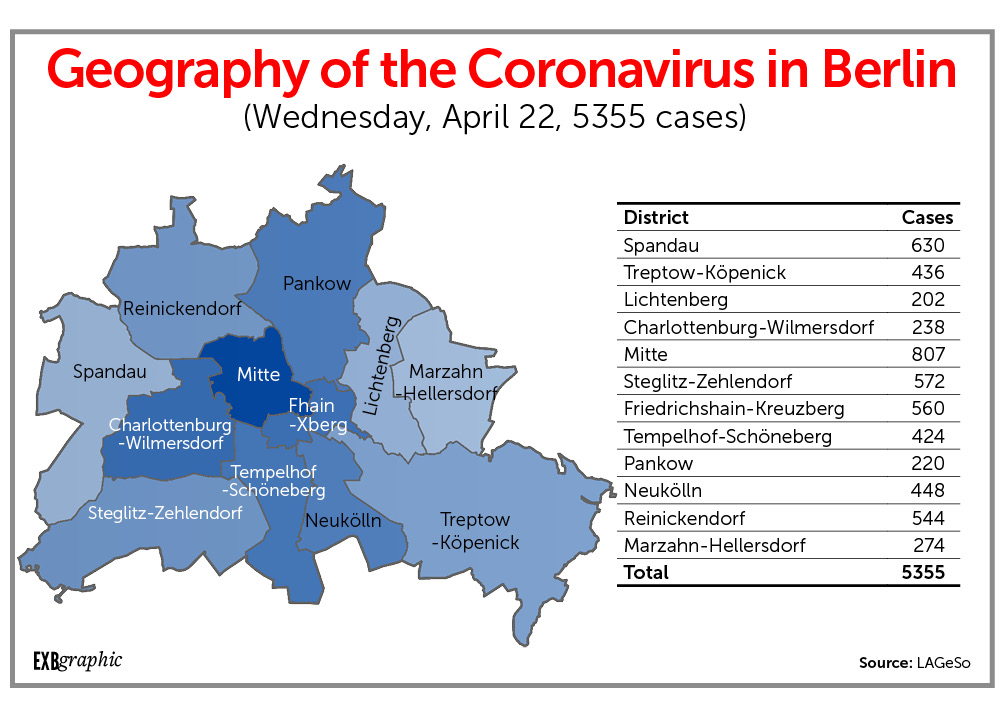 Soforthilfe, battle of the mayors and police news

The Tagesspiegel has received new numbers regarding Berlin’s Soforthilfe programme for freelancers and small entrepreneurs: Up until yesterday, 200,000 applications have been received by the Berlin Investment Bank IBB, €1.7 billion have been transferred to self-employed and small businesses (who hopefully all read the small print or our explainer interview). Commerce Senator Ramona Pop said: “We think our help has reached a vast majority of Selbstständige .” Yesterday only 2000 new applications were registered, which is down from a daily average of almost 11,000 last week.

Regarding city finances – or rather the big hole Corona has ripped in Berlin’s budget – a battle of the mayors has ensued: After Mitte’s Stephan von Dassel (Greens) suggested top public servants give up 10 percent of their salary for a couple of months, Spandau mayor Helmut Kleebank (SPD) has voiced his disagreement. Kleebank said he’d rather pay more taxes – i.e. increase income and property taxes. Which do you think will be more popular with the electorate?

Surprisingly enough, the police are counting far less crime in the streets of Berlin in Corona times. Last week, the number of pickpocketing incidents was 61 percent lower than it was the same time last year. Burglaries have gone down by 65 percent and car theft by 76.8 percent. Looks like both the criminals and their potential victims are spending less time outside these days.

On Twitter today, the police declared some degree of helplessness. Apparently, officials felt that even a police report might be useless when faced with six Hellersdorfers drinking their beers in close proximity, expressing zero interest in the Covid-19 restrictions and announcing their intent to have group sex later. Is it just us or are the Polizei not their usual upbeat selves?

Mayor Müller was apparently just thinking out loud yesterday when he suggested district offices could hand out free masks to the public. It’s caused a misunderstanding and people asking for the masks at Rathaus Tempelhof. The town hall decided to put a sign on their door: “No protective masks given out here”. Meanwhile Health Senator has used Twitter to remind Berliners to wear masks when interacting with anyone belonging to a high-risk group. She used a fancy new hashtag, too: #Alltagsmasken!

From next Wednesday, the doctors’ association will try out a new outpatient care programme named “Covid-Care” in Reinickendorf. The idea is to provide better care to people quarantined at home. GPs will keep in touch with the Corona patients and make sure a “Covid-Care” doctor goes to visit them in case symptoms get worse. So if you live in Reinickendorf and test positive, you know who to call (your GP!).

To get a test done, Berliners now have two more drive-through options come Monday: One in Neukölln’s Ziegrastraße and Zentraler Festplatz on Wedding’s Kurt-Schumacher-Damm. For those who don’t have a car: Thank you for not polluting the city air, you may also walk or cycle in to get your swab taken.

Mayor Müller is asking Berlin Muslims to celebrate Ramadan in their own homes and practice social distancing. He said that “for the people we love we have to remember that we can protect them best by keeping our distance even during religious holidays.” He also wished everyone “Ramadan Kareem”. The fasting month starts on Friday, Aril 24.

Noticed the weather lately? Pretty nice, huh? Problem is, it’s way too dry for our friends the trees and bushes. Now the Senat office for the Environment is urging the districts to invest in watering the outdoors. To help them manage and keep the city green despite the Corona crisis, the city is offering €50 Million extra this year for the care for trees and green spaces and new plants. They point out that “every watering can counts”.

Neukölln mayor Martin Hikel (SPD) has announced the district will close off streets to give kids somewhere to play other than the soon-to-be busy playgrounds. The details are still up in the air but Hinkel promised a quick decision. Seems like Corona is improving the city’s air quality in more than one way. Inhale – exhale!