Playgrounds, schools and student support The Bezirke are reopening their playgrounds – but not at the same time. Mitte, Marzahn-Hellersdorf and Reinickendorf have chosen tomorrow (Thursday) as their next play date, insisting on a set of rules in addition to the obligatory 1.5m-distance between kids. Those extra rules are no picnics, handwashing before and after the visit, no touching of others or one’s own face, and sneezing in one’s armpit. And if it gets too crowded, everyone will have to go home. Sounds like they are going to need an army of Spielplatz rangers. Pankow has decided to open 100 playgrounds tomorrow, Tempelhof-Schöneberg is following on Monday. Spandau councillor Frank Bewig (CDU) has criticized the decision to open the playgrounds at all, calling it a “big mistake”, pointing out that team sport, for example, is still banned and how impossible it is going to be to teach children to stay 1.5m apart. Might he have a point? As 10th graders are back at school, the Berlin parents association is not happy with the city’s ‘exemplary hygiene plan’ (Musterhygieneplan). The suggestions are fragmentary and cannot ensure students’ safety, the association has said. Schools had to develop their own safety plans and have no budget to make it work. The parents are also demanding the schools be cleaned more than once a day. Small relief for university students: The student union and Senat Chancellery have promised a €50,000 fund to support those who need headsets or laptops for the summer semester, most of which is happening online. Berliner Sparkasse is donating an additional €25,000 to the effort. Students will be able to apply for €200-500 on the Studentenwerk’s website from Monday. 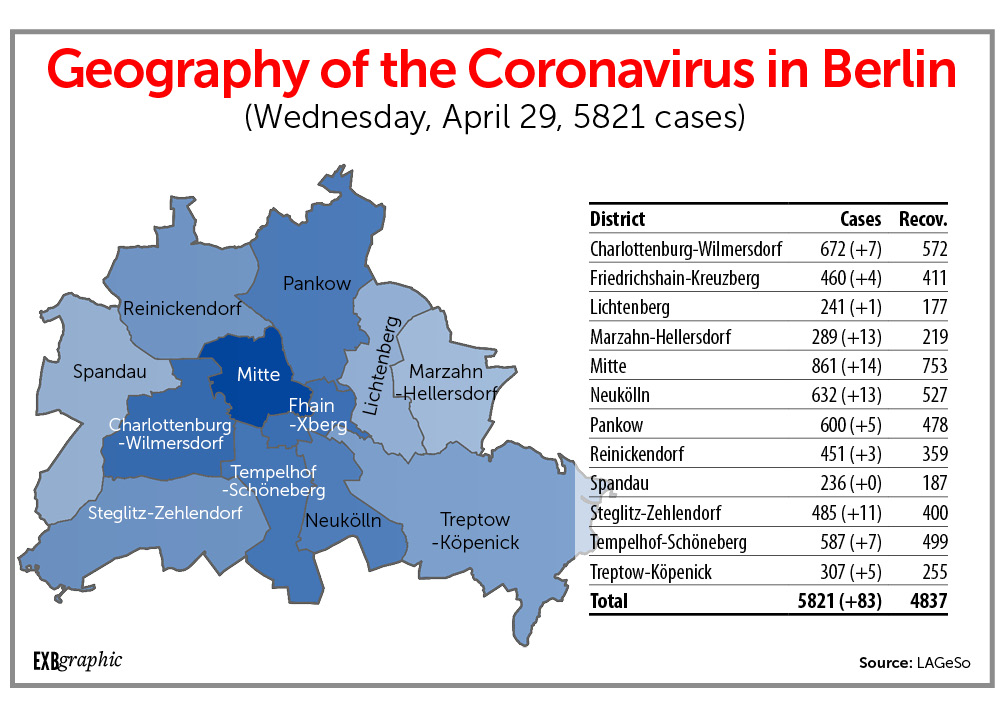 Covid clinic, Tegel airport, private Corona testing centre and quarantine benefits The new Covid-19 clinic on Westend’s Messe grounds is nearly ready. What’s missing now are the ventilators, which are currently hard to come by anywhere in the world as project manager Albrecht Broemme admits, and medical personnel. Clinic operator Vivantes is already hiring nurses, but more applications are needed, Broemme said in a radio interview. Initially the hospital was supposed to have 1000 beds, currently 500 are being made available. A private Corona testing centre has opened: The Ärztehaus Mitte has set up drive-by tents on a car park on Voßstraße where they are offering Corona antibody blood tests for €99 a pop. The idea is for people to be able to find out whether they’ve had the virus and can now go back to normal life. The problem, according to Tagesspiegel research, is that recent studies say there is no reliable antibody test yet. The kind of test the Ärztehaus offers can give positive results even if someone has not had the virus. Maybe if it’s negative you’ll know to run back home and lock the door? The board of the Berlin-Brandenburg airport association has voted for a temporary closure of Tegel. The have decided to request the aeronautical authority to give permission for a two-month service intermission. This time, federal traffic secretary Andreas Scheuer (CSU) has not objected, and the office’s representative at the board assembly abstained from voting. The closure is supposed to take effect on June 1. 5026 Berliners have applied to the city for quarantine compensation the Morgenpost has learned from the Senat’s finance office. Out of those, 1801 are eligible for the money. The possibility to reclaim financial losses due to mandatory quarantine (after being in contact with a confirmed Corona case or returning from abroad) is so far only being used by a fraction of those who could apply (quarantine has been ordered in more than 15,000 cases). So far, €60,000 has been paid by the city. Berlin snapshots: Gaming boom, Kleingarten frenzy and Spandau fears for Xmas market What do Berliners do when they can’t go anywhere, the parks and Krumme Lanke beach are packed and they’re desperate for some fresh air in nature? Apply for a Kleingarten allotment! The Kleingarten association has told the Tagesspiegel that applications have risen “explosively”, as 400 people have applied to rent a garden in the city within the last month. But the waiting list is long. In Tempelhof, alone 7905 are in line for a place to start their gnome collection. The next best thing to enjoying spring outdoors? Gaming, obviously. According to Kryptoszene, downloads for gaming apps have gone up by 132 percent globally in the last week of March compared to the same time last year. The industry is an obvious winner of the Corona crisis. If you want EXB’s two cents on the best games to play with your friends online, this way please.   Meanwhile, Spandau is fearing for its event of the year, Berlin’s biggest Christmas market in the old town centre. Celebrations with more than 5000 people have been cancelled until October 24, and the market is supposed to be built from mid-November, to open on the 23rd. So, not all is lost, but the cut-off date is dangerously close. The market has 250 stalls and around 1000 people working there. Here’s hoping for a Corona-free Xmas 2020!