Uh-oh, Health Senator Dilek Kalayci’s (SPD) Corona Ampel (see yesterday’s news report) is not going down well with public health officers. The docs from all 12 districts have signed an open letter questioning on which base the criteria were chosen for the new Corona assessment system (they had not been consulted) and complaining that they only found out about the decision from media reports. They also complain that Kalayci had promised more testing, without specifying who should get tested and how. The Tagesspiegel has heard that behind-the-scenes tension is high between the officers and Kalayci’s office.

Berlin’s audit court has warned that city government needs to review all expenses and investment plans. According to their office, the current emergency situation warrants taking out new loans, but that the Senat also needs to set priorities and perhaps postpone some less urgent projects – and make a plan for when the new dept should be paid back – the audit court thinks 10 years is realistic. Court president Karin Klingen said Berlin could quickly rack up debt surpassing 2011’s €62.9 billion (currently it’s a mere €57.6 billion – no biggie!).

Mitte has opened its new quarantine centre for homeless people right above the Stadtmission’s emergency clinic in Lehrter Straße 68. It  is the first of its kind in Germany and offers 16 beds for homeless, Corona-infected Berliners. A spokesperson explained that the beds were for confirmed cases who did not suffer from dangerous symptoms but needed to be quarantined and monitored. 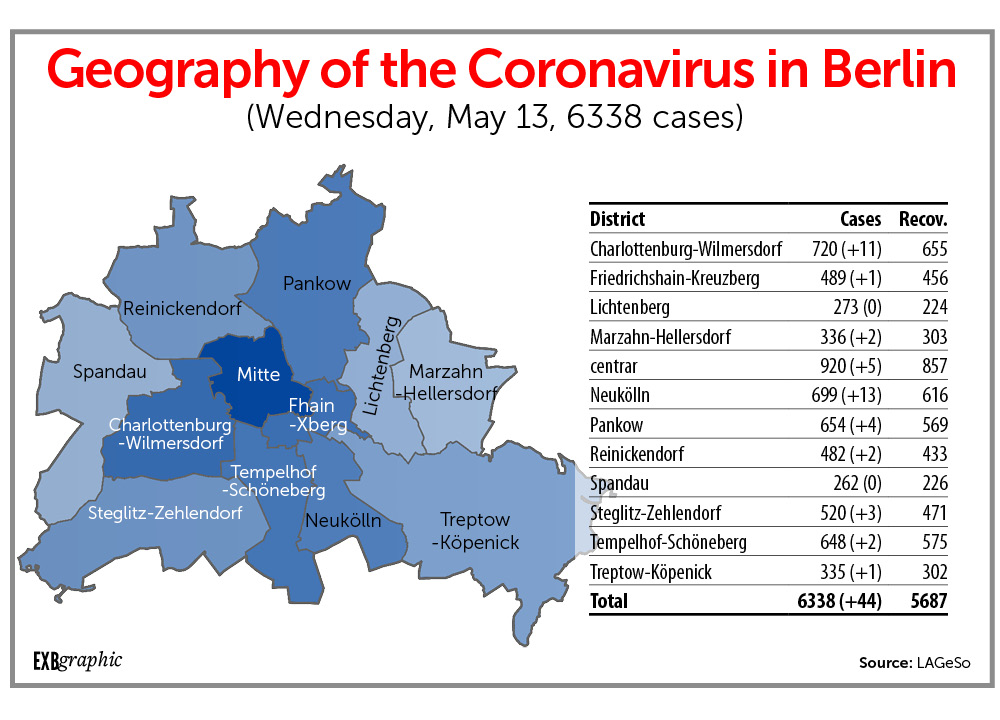 Now that Chancellor Merkel (CDU) has said a return to the Schengen system was on the cards and that the federal government would discuss reopening borders again this week, the Senat has to come up with a plan: Currently everyone coming to Berlin from abroad has to go into mandatory quarantine for 14 days. The decree is valid until June 5, but health administration is already checking whether it needs to be lifted ahead of time.

Several bouldering and climbing centres will reopen their outdoor areas this Friday. Precautionary measures will be taken and some spaces have requested advance online booking to make the reopening as smooth and safe as possible. Südbloc, for example say sessions will be limited to 120 minutes and a strict 2m distance must be kept. Happy climbing – if the weather is nice! (And don’t get confused, fitness studios are still closed.)

The Senat extends emergency child care: From May 25, five-year-olds will also be accepted at the kita if one of their parents has a job listed as being of systemic importance – or if they live with a single parent. Currently 600,000 kids are eligible. Some providers will also offer part-time care for all. Kita association DaKs has complained today that the Senat is asking too much of the kitas, especially if they are expected to ensure hygiene and distancing rules are implemented.

#UnitedWeStream has collected €450,000 from 14,500 donors. Now, Berlin clubs are receiving the first €300,000. The initiative has been streaming live DJ sets every night since clubs had to close in March. A 10-strong jury has been formed to decide who gets what and endure the money is divided in a fair manner.

Following Friedrichshain and Kreuzberg, Neukölln has announced plans to regularly close six streets to cars so children have more space to play while keeping a safe distance from each other. The closures are planned for Sundays and public holidays between 1 and 7pm, starting on Pentecost (May 31). Listed for these closures are: Selkestraße between Schierker Straße and Nogatstraße as well as Schierker Platz, Nansenstraße on Reuterplatz, Karl-Marx-Platz to Richardplatz, Hobrechtstraße between Sanderstraße and Pflügerstraße as well as Buschrosenplatz and Hüsung.

Meanwhile, Friedrichshain-Kreuzberg is planning to continue closing parking spots and potentially streets – this time in favour of of cafés and restaurants. The aim is to allow them to put out tables while keeping enough space for people to observe social distancing on the sidewalks. The first step will be to reserve the parking spots for gastronomy Friday through Sunday from 11am to 10pm. If this should prove insufficient, street closures will follow. The district is once again ahead of the game as pedestrian association FUSS e.V. has already complained about the SPD’s suggestion restaurants could take over sidewalks.