Back to the Amt, Tegel closure, compensation for parents and blood shortage

With the kita situation still a mess, there is finally some good news for parents: According to DPA, the federal government agreed today to compensate mummies and daddies for up to 20 weeks of lost income if closed kitas made it impossible for them to do their jobs as normal. Details should be coming through soon.

Whether you’ll be required to apply for the parents’ compensation at the Bürgeramt, the news has broken that they’ll be going back to normal from Monday on, i.e. you’ll be able to book appointments online. If you’re patient. Spandau councillor Stephan Machulik (SPD) has complained about the pressure they’re getting from the Senat, saying they would have to work with the resources they had, keeping people safe and their buildings clean. So maybe we should be patient, actually.

Some other big news has landed today: The closure date for Tegel airport is going to be June 15, the Berlin, Brandenburg and federal governments decided. At this point, nobody is expecting the city airport to reopen ever again – and all eyes (and passengers) will now be on Schönefeld and the BER, whose new terminals are set to open on October 31.

Bloody Corona: The German Red Cross has warned that hospitals and doctor’s offices are headed for a shortage of blood bottles as new dates for donations can only be set up for June. In Berlin, supplies would only last one ‘normal’ day which is why many operations are being rescheduled. And man, they’re really going to need those donations in June!

In time for hotels reopening and European travellers no longer having to go into mandatory quarantine, sightseeing tours will pick up again on Monday. Including those delightful Spree cruises. One Spandau company told the Tagesspiegel they would start with short excursions to test the waters first.

The Babelsberg film studios are champing at the bit to get on with its two big secret projects (which everyone thinks are the video game-inspired Uncharted and The Matrix 4 with Keanu Reeves). The sets are ready and waiting and the studio hopes that mid-June, with the help of protective masks, they can return to business. But, as the Studio Babelsberg CEO has pointed out, Corona is posing some difficult questions with regards to love and fight scenes.

Speaking of film sets: If, after all this home-time you’re ready to hop on an island, Brandenburg’s favourite indoor holiday resort, Tropical Islands, is reopening on June 15. If you have no idea what this means, don’t worry, we’ve got a whole travel report from when one of our most daring reporters took the trip out there last summer.

Also back in June: Deutsche Bahn’s fast Berlin-Munich connection. Berlin-Frankfurt/Stuttgart is back on track already, now you’ll again be able to go to the Bavarian capital in under four hours (if all goes well and there are no delays, that is). The frequency will be raised over the following weeks, until it’s back at its pre-Corona count of six trains a day. 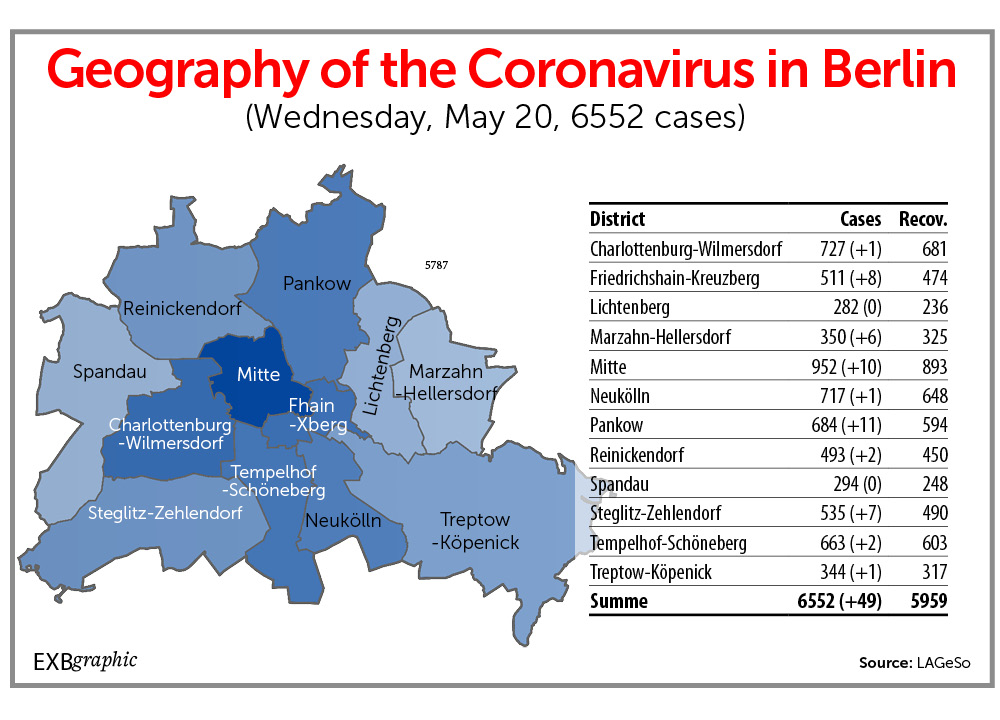 Long weekend ahead: BBQs, camping and police getting ready

No BBQ in Monbijou – or any Berlin parks, really, this Herrentag! The Senat has banned the Bratwurst from the city’s parks until further notice, and Mitte’s environment councillor has reminded Berliners today that the Ordnungsamt will be checking for illicit Wurst. And Corona may impact people’s sense of smell, but the councillor swears they’ll find you.

Campsites in Brandenburg are expecting many visitors over the long weekend and many are already completely booked – despite the requirement of everyone bringing their own chemical toilet. That must be saying something about people’s desperation for a change of scenery. From next week the rules will be relaxed, but one must make hay when the sun shines, right?

With tomorrow’s Herrentag drinking, Friday’s Union vs. Hertha football match and Saturday’s anti-Corona restriction demonstrations, Berlin police have their work cut out for them. Today a spokesperson told the Morgenpost that while their strategy was still being finalised, officials would definitely be out checking for compliance with anti-Corona hygiene and safety regulations as usual.