R value mix-up, warnings from Müller and Merkel, infections in Spandau and Buch

The confusion about Berlin’s R value alert has been cleared up: After a critical 1.37 on Monday, the Robert Koch Institute accidentally resent the same numbers to the Senat on Tuesday, and it was only in the evening that the error was corrected and it turned out that Berlin was once again in the green, with a value of 0.9. The R value reflects how many people an average Corona patient passes the virus on to. Tonight the Senat reports 0.88.

Despite the R value being back in the green zone, Mayor Michael Müller (SPD) has voiced concerns about an increasing number of Berliners no longer following the official anti-Corona measures. “We have to master this situation collectively,” he said. “Our behaviour has consequences for others.” Müller addressed the press after a video conference between colleagues from other (formerly East) German states and Chancellor Merkel, who said “We still live at the beginning of the pandemic. We have no vaccine, we have no medicine. But we have gained better control.”

Meanwhile, a Spandau assisted-living facility for elderly people counted nine infected residents and 11 staff with the virus. A refugee shelter in Buch reports 25 infections, a jump from 16 last week. 407 residents were tested, and those whose results came back positive are now in quarantine. Staff and security will be screened this week (about time it would seem). Good news from a Hennigsdorf refugee shelter where 68 people had tested positive: all patients have recovered from Covid-19. 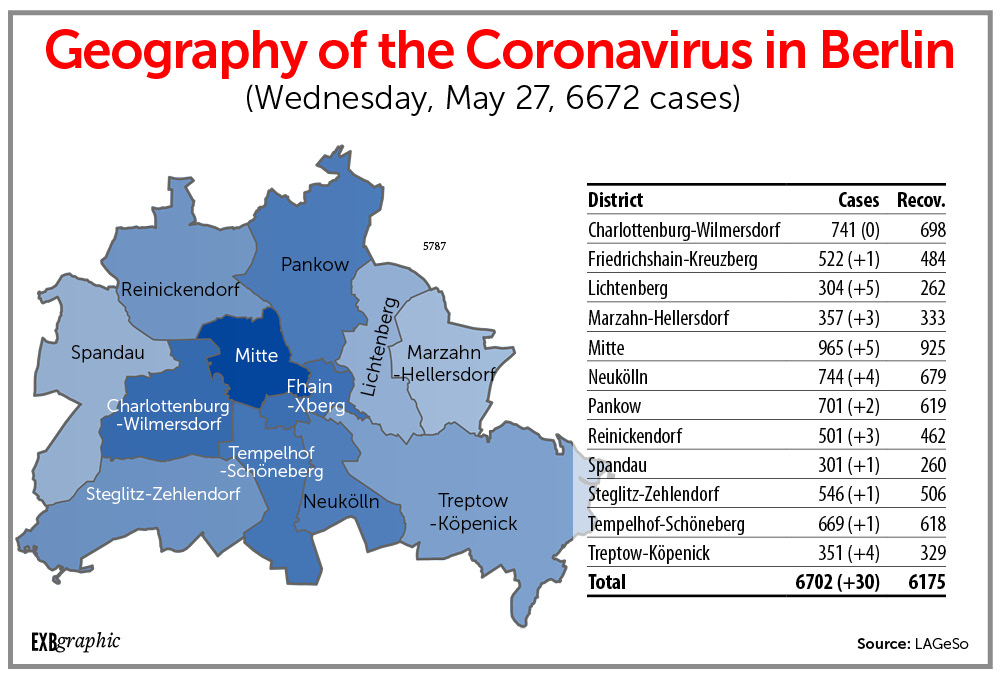 A demonstration by travel bus operators titled “Honk for Hope” has caused some serious traffic jams in Mitte and Tiergarten today. 300 buses drove through the city and up to Brandenburger Tor, with protesters demanding financial help for their businesses as well as permission to resume operations immediately with compulsory masks for all passengers and locked on-board loos. Parallel demonstrations took place in Düsseldorf, Dresden, Mainz, Kiel, Stuttgart and Wiesbaden.

The Senat is paying €12 million for around 12,000 kids from underprivileged families to be able to go to summer school. The idea is to help them make up for all those lessons they missed due to school closures. Another €8,337,000 is budgeted to go to projects supporting pupils who don’t get the homework support they need at home. A further €4,723,000 can be spent on computers loaned to families who can’t afford them.

Financial aid is also coming for the city’s non-profits. State secretary Sawsan Chebli announced the Senat was working on an immediate relief programme for small organisations and initiatives who haven’t received any support so far and face existential financial situations. Another programme will support projects designed to help the social effects of the Corona crisis.

Police stop the music and parts of Technikmuseum are back soon

It’s not every day that Berlin police get called to the set of a rap video shoot: At 0:50 last night, 33 police had to break up an event with more than 70 people at a Westend villa – supposedly the pool-side scene of a music video shoot for Shirin David. Neighbours had complained about the noise and police had reason to believe that more than two households were present…

Another Berlin museum has announced a date for reopening: From June 16, Deutsches Technikmuseum will allow up to 200 visitors into its Ladestraße building (exhibits: cars and the internet), while the main exhibition space and Spectrum Science Centre remain closed. Visitors will have to wear masks and pay a reduced entrance fee of €4/€2.