A recap of the news from Friday:

The number of confirmed Corona-infected Berliners has risen by another 25 percent since yesterday to reach 868 cases, 490 men, 378 women. Almost a third of them (27 percent) are in their thirties (see graph below). Forty-four people are isolated and treated in hospitals, 18 in intensive care, the other patients remain isolated at their homes.

This Friday Berlin has also seen its first death from the Coronavirus. The deceased man was 95 years old and suffered from serious underlying illnesses, announced the Senat Department for Health. 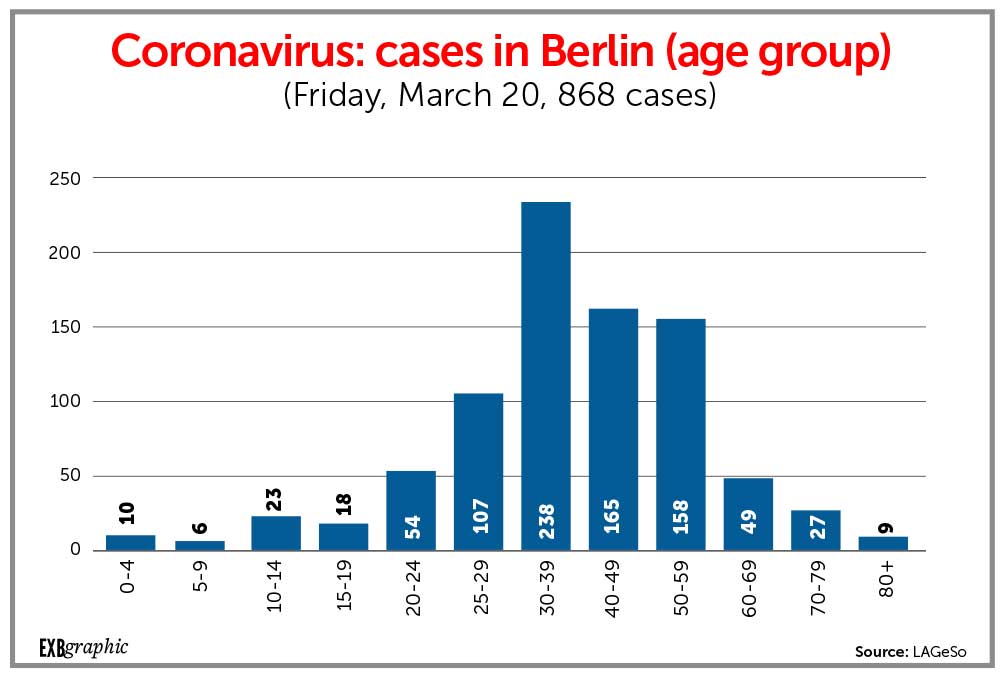 Seventy members of the Berlin fire brigade are in quarantine at their homes, the Morgenpost reports. Five of them are infected with the Coronavirus, 25 had contact with one infected person and were isolated on the orders of medical officers while awaiting their test results. The remaining 40 are in isolation as a precaution.

Also impacted by the virus is Mitte’s town hall: district Mayor Stephan von Dassel (Greens) has tested positive for Corona. He has recorded a home video urging Berliners to stay home even with light cold symptoms and to reduce social contacts to a minimum in general. He assured the public that he is working on getting better, eating lots of fruit and garlic. Yum!

Meanwhile, Berliners are still enjoying their freedom with so-called ‘Corona parties’, spurred on by the warm weather which drew people outside. From Thursday evening until early Friday morning, police officers checked 98 pubs, restaurants, shops and other places all over Berlin for the new opening restrictions. As a result, 91 reports were filed, often for open pubs or shops that disregarded the new measures. Some people obviously still don’t get the message.

No curfew, however, has been imposed yet despite a fake message circulating on WhatsApp this afternoon. The State Office for Health and Social Affairs (LAGeSo) confirmed on Twitter that this message is fake news as a fierce debate continues in the Senat about imposing such a curfew.

One party fiercely opposed to it is Die Linke. Left Party leader Katina Schubert has said ‘’any other means must first be exhausted’’ arguing that whoever wants to impose a curfew now is doing so in order to politically capitalise on it. Chancellor Merkel and the Länder are set to decide about nationwide confinement measures this weekend. One of Germany’s foremost experts, virologist Christian Drosten of the Charité, pointed out in his NDR podcast, that so far there is no data suggesting a curfew would make a positive difference at this point.

Emergency support to freelancers and businesses

Badly hit by the Corona crisis, small companies are looking for state support. As of this Friday, a total of 2800 businesses have applied for so-called Kurzarbeitergeld for a total of 60,800 employees. The Berlin-Brandenburg head of the Arbeitsagentur confirmed that unemployment and cases of reduced working hours are increasing rapidly.

In addition, the Berlin government announced today that businesses with up to 250 employees would be eligible for financial aid of up to €500.000, the total budget for these businesses currently lies at €100 million, with the option of being increased to €200 million.

Meanwhile, the Senat has agreed on a financial support programme for freelancers and individually self-employed Berliners. The budget for 2020 was set to €100 million with an optional increase to €300 million. Senator of Commerce Ramona Pop (Greens) said the aim was to make the application procedure as simple as possible.

Individuals can apply to be granted a sum of €5000, with the possibility to re-apply after six months. Applicants will have to prove that their professional survival is endangered by the Corona crisis and that they have applied for other state programmes such as Kurzarbeit and Grundsicherung. 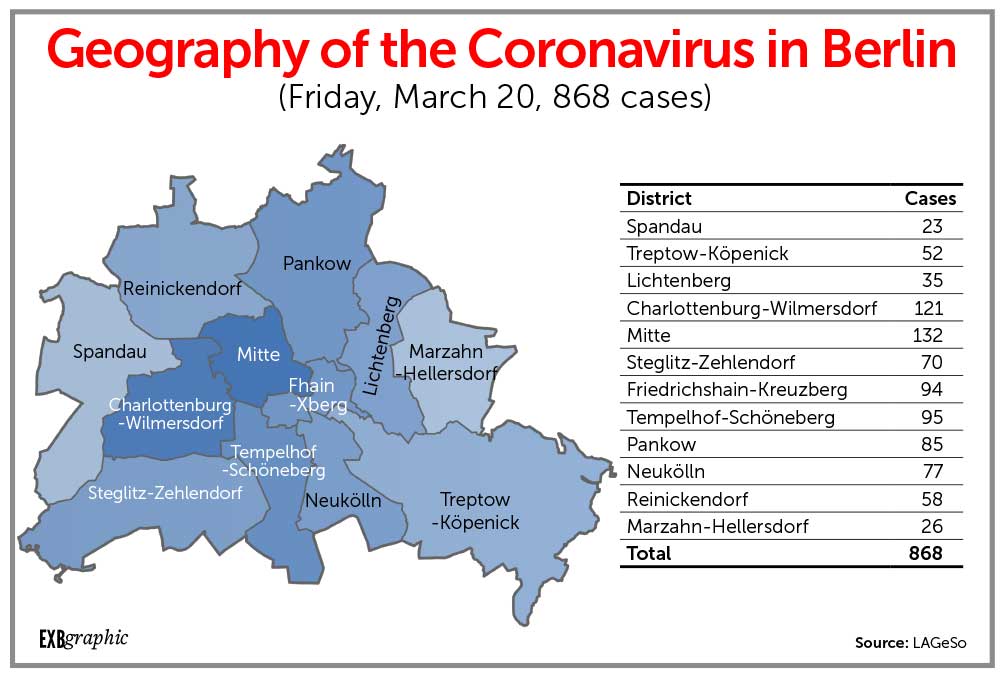 Finally all Berlin districts have decided to close their playgrounds. The first to make a move today was Pankow, announcing it will cordon off its playgrounds from Monday, March 23. Neukölln and Charlottenburg-Wilmersdorf are acting a bit quicker: Using playgrounds and sports fields will be prohibited from Saturday onwards. Finally, the last Bezirk to give in to the pressure was Treptow-Köpenick – with immediate effect.

Speaking to rbb-Inforadio this morning, Mayor Müller was still defending the Senat’s decision not to close all playgrounds. Having previously argued that, in a city with millions of inhabitants, people needed to be able to spend time outdoors, he also pointed out that a closure of all Spielplätze would be hard to put into practice. A spokesperson for Berlin’s health senator had told rbb on Thursday that if playgrounds were closed, the logical consequence would be to close parks also – which would make for a de-facto curfew.

While playtime is over, studying continues for Berlin high schoolers: According to the Education Senator’s office, 165 out of 170 Berlin secondary schools decided to stick with the original Abitur exam dates. However, Morgenpost reports that more and more schools are at least rescheduling oral presentation exams since students don’t have access to libraries and are therefore limited in their research.

Berliners have already donated about €127,000 as part of a donation campaign set up by the Club commission. Some 4,300 donations were collected after only two days of setting up the campaign. The campaign is aimed at saving the clubs from lack of revenue induced Clubsterben.

A new stay-at-home flashmob is being promoted on WhatsApp and social media: After Berliners applauded the city’s heroes holding up critical infrastructure, now there’s a call for musicians to play at their open windows on Sunday at 6pm. The symbolic act is to help fellow Berliners through hard times, but also draw attention to the huge financial losses musicians are facing due to the cancellations of concerts.

Fair play: Those who have been officially ordered to quarantine and have bought monthly or 7-day tickets with the VBB (including BVG and S-Bahn) can now have parts of their ticket refunded (customers with a year-long Umweltticket subscription and the Firmenticket are excluded). The Verkehrsverbund will refund the purchase price minus the value of two single tickets per day on which the ticket could still be used. They’re already warning customers that refunds might take a while to go through.

Thank you for reading EXB and have a good, healthy weekend! Our daily corona updates will be back on Monday.