Berlin’s official count of verified cases has risen to 332 people  – an increase of 110 percent since Friday evening. Of those who have tested positive, 188 people are men and 144 are women. Twenty people are isolated in the hospital, three in intensive care, whilst the others are isolated in their homes.

The Berlin fire brigade have confirmed during the weekend on Twitter that there was a case within their staff members, and 24 colleagues had been quarantined as a result. 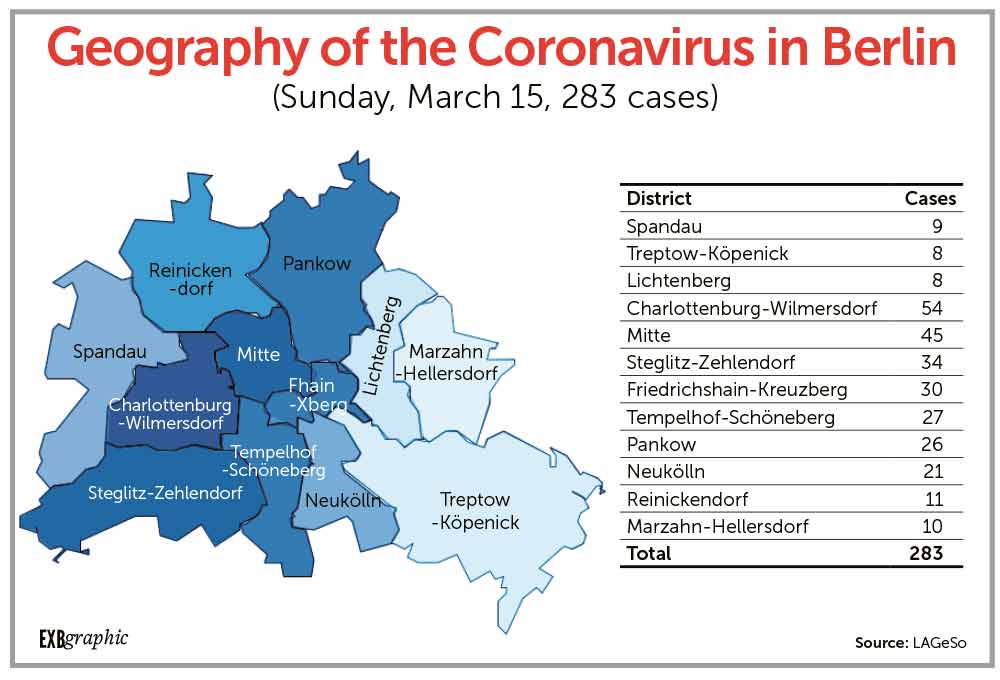 As of Saturday, events with 50 or more participants have been officially prohibited. This includes all theatres, kinos, bars, clubs, casinos, malls, sport facilities, flee markets … and bordellos “and similar businesses”. For events with up to 50 people, organisers are required to collect names, addresses and phone numbers and keep them for at least four weeks to be handed over to the health authorities on demand.

Restaurants may remain open if the ‘seats for the guests are arranged in such a way that a distance of at least 1.5 metres between the tables is guaranteed’. Opening hours are limited to 6am to 6pm.

Supermarkets, food markets and delivery services as well as convenience stores and drugstores are still open – so, although you might be missing your supply of toilet paper, pasta and canned fish, don’t panic: noone should be left starving!

So far, 21 criminal proceedings for open pubs and other recreational proceedings have been initiated by the Berlin police. Interior Senator Andreas Geisel confirmed that violation of the new closures set forward due to the Coronavirus could result, in up to two to five years prison. According to the Berliner Zeitung, 132 venues were closed over the weekend.

Many clubs, such as Berghain and Schwuz in Neukölln had already closed on Friday. Today Tresor announced a man who tested positive attended an event on March 7 before returning to his native Brazil. The Neukölln Health Office has idnetified a dozen people who were in contact with this man – they’ve all been home-quarantined. About one sixth of the infections in Berlin – about 42 cases, are recorded as being related to club visits, Health Senator Dilek Kalayci (SPD) explained on Twitter Saturday evening.

Exberliner has already reported on an incident at Trompete nightclub, whilst Kater Blau in Holzmarktstraße announced a guest that attended on March 7 had tested positive yesterday. The Friedrichshain-Kreuzberg Health Office has asked all guests who were at Kater Blau on that day to stay at home and contact the Health Office by mail: coronakontakt @ba-fk.berlin.de as a precaution. Nine Covid–19 positive indiviudals had also celebrated at the Berlin club The Reed near Alexanderplatz on February 27. 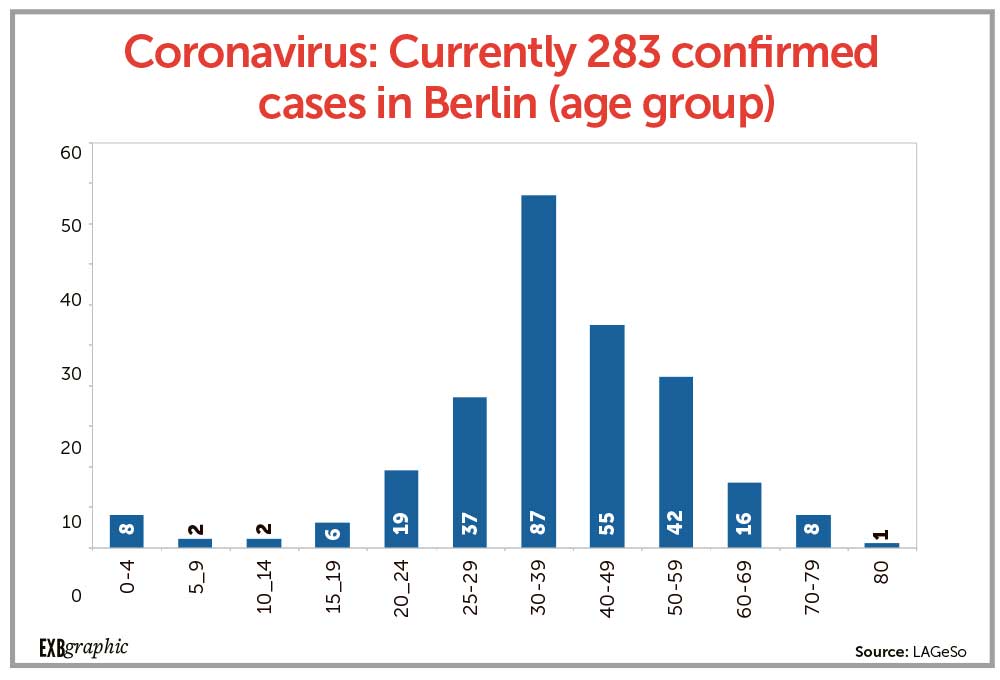 Senator for Education and Family Sandra Scheeres (SPD) also announced daycares were to close as of Tuesday. Professionals in health care and other crucial public services will be offered emergency daycare.

From tomorrow on, all Berlin schools will remain closed until April 19. Exams for intermediate school leaving certificate (MSA) will be postponed. Abitur examinations will continue as planned whilst material for learning is made available online.

Hospital visits are no longer allowed, whilst children aged 16 and under may have one visitor a day who does not suffer from respiratory illness.

The Federal Employment Agency is simplifying access to unemployment benefits and Hartz IV. With face to face meetings being strictly limited to emergencies, those receiving Hartz IV will be able to carry out their registration via telephone and applications via email. The Federal Agency is expecting an increase in applications for unemployments.

On Sunday evening Federal Health Minister Jens Spahn (CDU) appealed for public understanding of the drastic measures to shut down public life against further spread of the corona virus, without ruling out the potentiality for further measures. He assured that supermarkets, pharmacies and banks would remain open in order to ensure basic supply.

Meanwhile Berlin Taxi drivers who are suffering massively from the corona crisis, are offering a shopping service for senior citizens and people who cannot provide for themselves.

Berlin Sparkasses closes branches from tomorrow until at least April 19, however assures customers that self-service centres and ATMs will still be available to the public.

The Berlin Football Association has officially suspended matches until April 19 following the Senat’s decision to discontinue sports operations. There will also be no further training measures, courses or conferences.

Even Extinction Rebellion has cancelled previously planned blockades due to the Coronavirus, stating the health risk of such mass events. The Senat is aiming to include the blocking of demonstrations and rallies with more than 50 participants in a bill of legal ordnance which it will pass tomorrow (Tuesday March 17 ).

Elsewhere in Germany, starting at 8am this Monday, Federal Interior Minister Horst Seehofer (CSU) has announced stricter controls and entry bans at Germanys borders to Switzerland, France, Austria, Denmark and Luxembourg for travelers without a “valid reason”. The rule does “naturally” not apply to German citizens wishing to re-enter their home country. In a press conference on Monday night, Angela Merkel urged citizens to postpone all national and international travel.

Meanwhile on the world stage Trump has come under scrutiny for offering “large sums of money” to get exclusive access to a coronavirus vaccine being developed by Germany -based biopharmaceutical company CureVac. According to an article in Die Welt, the Trump administration wanted the company to move its research facilities to the US to develop a vaccine “for the US only”. Germany’s Health Ministry confirmed the story to Reuters, and the economy minister stated that “Germany is not for sale”.

France’s President took a major step on Monday evening towards an Italian-style lock-down, cancelation of elections and reforms and a state of national quarantine.