Today the number of confirmed Corona-infected Berliners has reached 1219 cases, 678 men, 539 women. Forty-seven people are isolated and treated in hospitals, 22 in intensive care, the other patients remain isolated at their homes. This morning Health Senator Kalayci confirmed the city’s second corona casualty, a 70-year-old man. 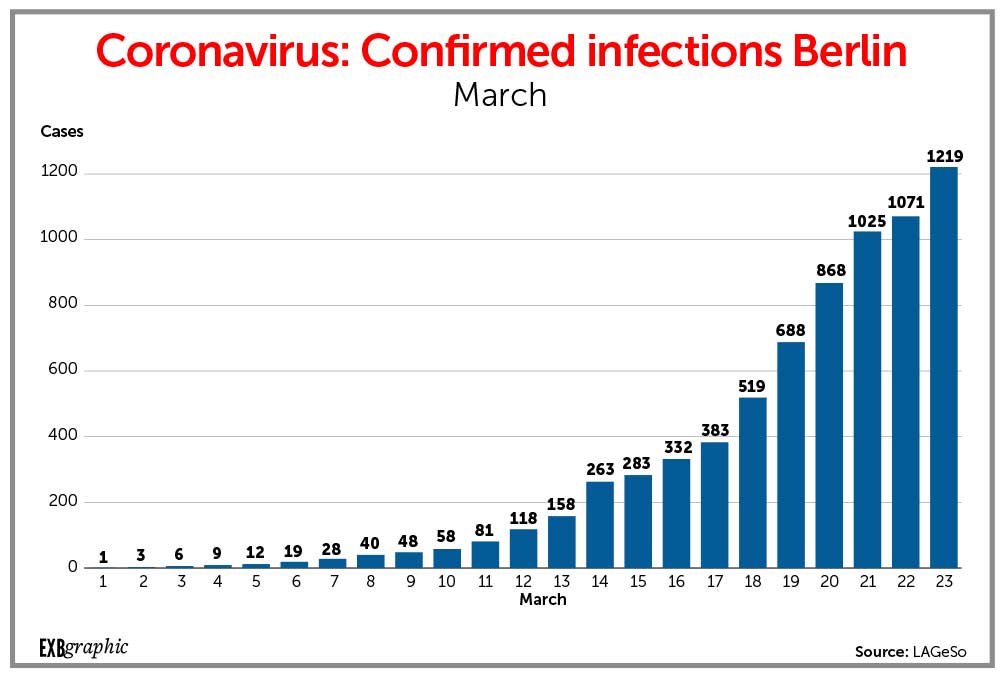 The new ‘contact ban’ announced by Angela Merkel on the weekend and binding for citizens and residents in all of Germany’s federal states, including Berlin, has taken effect. After what Mayor Müller has described as “intense discussions” lasting several hours , the new restrictions imposed blanket rules that citizens and residents are supposed to limit their contact to a minimum and keep a distance of 1.5 to 2 meters away from each other. Spending time outdoors is allowed with no more than one other person or people who live together anyway. People can still carry out necessary tasks, but those who gather in groups or party together will be fined. Restaurants may only offer take-away food and companies have to follow strict hygiene rules. Individuals may be asked by police officers for their reasons for being outside.

Also in effect as of today are the city’s own Ausgangsbeschränkung rules. Ordered by the Senat, Berliners are now supposed to stay at home until further notice. Exceptions are many and include: food shopping, work, volunteering, seeing a doctor, psychotherapist or physiotherapist, blood donations, seeing spouses and exercising one’s right of contact with one’s children, visitng old and sick people (unless in a home or hospital), accompanying someone needing assistance, terminal care and funerals within the close family circle, leaving and returning to Berlin straight from or to one’s home, sports outside with anyone living in the same household or one other person but no other groups, looking after animals (including dog walks), tending to gardens and farming land, attending events that are still permitted (such as court hearings), exams, urgent meetings at court, at the Amt a lawyer’s or notary’s office, subpoenas, solitary prayer at a church, synagogue or mosque.

Still not allowed: Spielplatz playdates. And, as of today, no public mourning: 46 graveyards remain closed after reportedly being used for gatherings, sometimes “in very large crowds” – or repurposed as playgrounds. The Tagesspiegel quotes Evangelical Church Superintendant Bertold Höcker as saying that some families had gone so far as to create makeshift sandboxes. Definitely the wrong place to dig around in! The Church reportedly wants to keep the cemeteries closed for two weeks.

Tips for elderly and refugees

Health Senator Dilek Kalayci (SPD) has encouraged all Berliners aged 70 years and older to go into self-imposed quarantine and no longer leave their apartments. According to rbb she reminded them at the Abgeordnetenhaus this morning that “distance is the best protection from corona infection.” She reportedly also recommended that care personnel do not talk to elderly people when working in close proximity (i.e. helping them dress or wash): “One can communicate with a 1.5m distance.” Older people are at a higher risk of developing life-threatening symptoms from the virus. The two Berliners who have passed away so far were 95 and 70 years of age respectively. 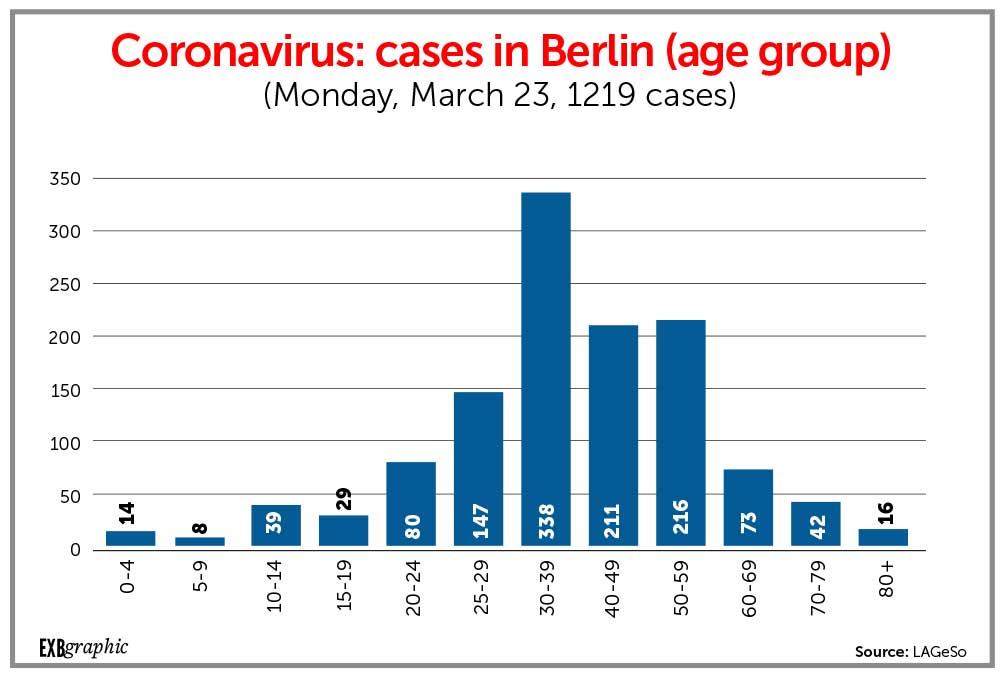 Refugee homes have not been spared by the virus. The Amt in charge told the DPA that in Berlin’s 80 refugee homes so far at least four residents and one staff member have been infected. After the first case was discovered in Charlottenburg-Wilmersdorf, 100 refugees remain quarantined with no additional infections found so far. The Amt has made a five-minute podcast in six languages to tell refugees, in case they have been living under a rock (“Worldwide there is a new virus, causing an infectuous disease…”) , how to protect themselves from the virus.

The U-Bahn is currently running on holiday-schedule, meaning longer intervals (mostly 10 minutes) between trains, but according to Tagesspiegel the BVG is planning to increase frequency again from tomorrow (Tuesday, March 24) in the mornings between 7 and 8am and potentially in the afternoons so U-Bahns don’t get too crowded during rush hour. The public transport provider promised to closely monitor the situation, especially on lines U5, U7 and U8 and send extra trains when and where needed.

In the meantime, the daily reports, pretty much all e-scooter companies have collected their vehicles off the Berlin streets over the weekend. That includes providers Jump, Bird, Circ, Uber and Lime.

Mayor Müller has announced that Berlin universities will receive €10 million for the so-called “VirtualCampusBerlin”. The e-learning platform is supposed to be the answer to the problem that has already delayed the new semester starting on April 20. As it is unlikely, alas, that the covid-19 nightmare is over by then, universities are supposed to organise their lectures online. 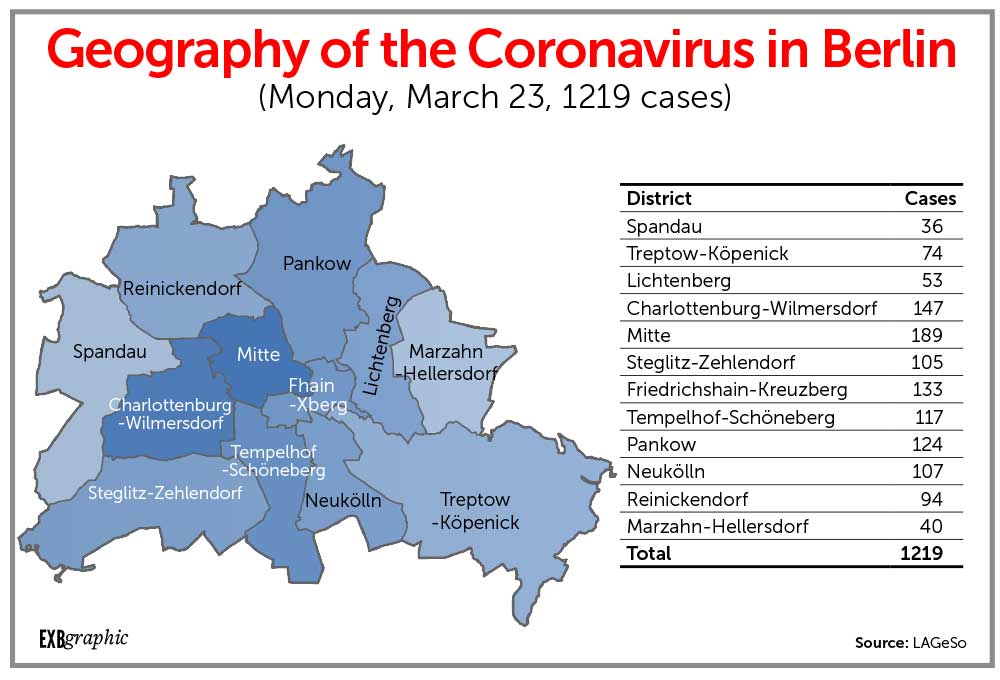 Neukölln is supporting its volunteers: Anyone doing food shops for old and/or quarantined people, or offering help walking dogs or just giving time to talk on the phone with isolated Berliners can apply for up to €800 to rent a cargo bike or car or get reimbursed for petrol. To apply for the financial help, volunteers can just send an email to [email protected].

Non-profit Karuna has started a task-force to support Berlin’s homeless, the Tagesspiegel reports. Today, their volunteers gave out food and €10 to every homeless person that came by. In the coming days, the task force will be going around the city, offering the money to homeless people in the street, taking their temperature and helping them get medical treatment. Karuna accepts donations on their website.

The Berlin-based Einstein Foundation is donating €300,000 so the Charité can pay students to help with basic medical services. According to the Morgenpost, the plan is now to hire 100 students of the Charité itself as well as the Alice Salomon Hochschule and to pay them €3000 for three months. Foundation head Günter Stock said the initiative is not only to support the Charité in these times of high demand but also encourage and honour the social commitment of young people.

Angela Merkel’s first corona test came back negative. The chancellor has gone into quarantine after a doctor who gave her a vaccination on Friday had turned out to be infected. Merkel will have more swabs taken because the test is not guarenteed to be accurate so soon after exposure. For now, the head of government joins countless Berliners on the home office grind.

The Robert Koch Institute has cautiously reported that the increase in the number of coronavirus cases in Germany is slightly weakening. President Lothar Wieler said it was too early for a definitive assessment which would be more possible on Wednesday, however the data showed that perhaps measures taken were indeed slowing down the spread of the virus.