The number of Berliners infected with the Coronavirus has gone up by another 25 percent. Tonight’s official count (March 19, 20:01) is 688 confirmed cases, 389 of them men, 299 women. Forty-three individuals are being treated in hospitals, 15 of them in intensive care, the other patients remain isolated at home. 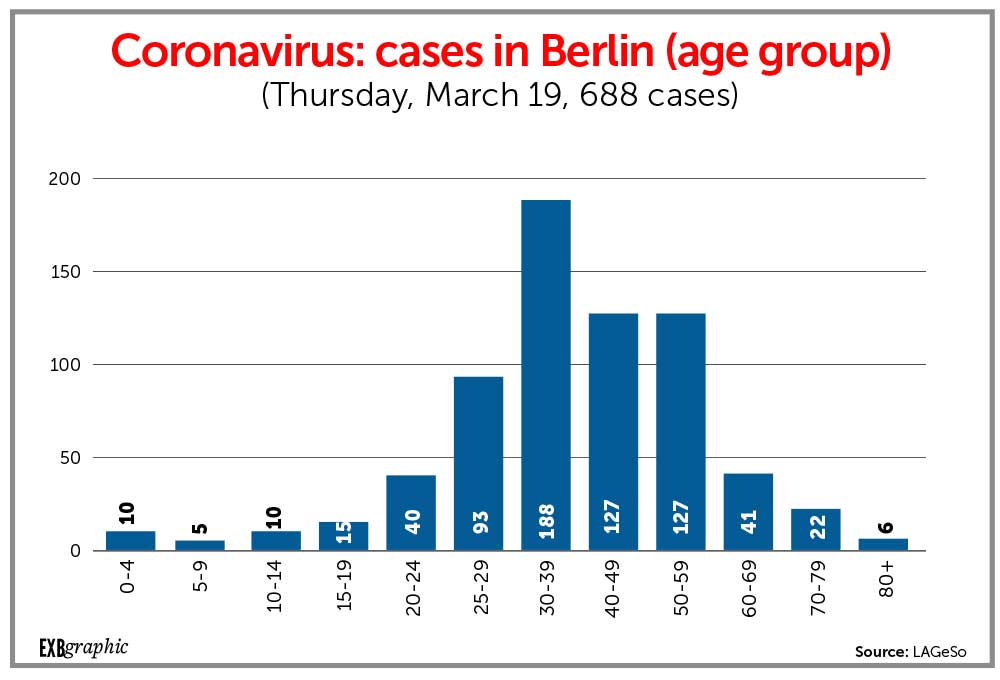 The Senat has decided today that supermarkets, Spätis, drugstores, hardware and pet stores may open on Sundays between noon and 6pm. The permit is valid until April 19.

Berlin book shops including Kreuzberg’s Dante Connection, Prenzlauer Berg’s Uslar & Rai, and Pankow’s Pankebuch have set up bike delivery services. While book shops have not yet had to close, it’s worth checking out their offers to keep the reading material coming.

Meanwhile, police are checking the implementation of restrictions for other shops, bars and restaurants. On Twitter, they said that out of the 154 places controlled last night, 97 had to be closed by police officers. The city has ordered all bars and most shops to remain closed and restaurants to shut their doors at 6pm.

Good news for Mayor Müller: the SPD politician tested negative for the virus after fears he might have contracted it from speaking to Israeli ambassador Jeremy Issacharoff at an event on March 9. Issacharoff had tested positive. As RBB reports, Berlin Senator of Commerce Ramona Pop (Greens) has also been given the all-clear while Culture Senator Klaus Lederer (Die Linke) is still awaiting his test result.

Neukölln bar Klunkerkranich has said on Facebook that a guest who had been with them between 5:30 and 7pm on March 11 has tested positive for covid-19. He had spent most of that time with his group of friends on the roof terrace, only entering the “Wohnzimmer” to get drinks. The bar advises anyone who was there at the same time to monitor their own health and practice social distancing.

Safety for kids, students and the homeless

Friedrichshain-Kreuzberg has joined the districts of Mitte, Marzahn-Hellersdorf, Reinickendorf, Steglitz-Zehlendorf and Spandau in closing its playgrounds, the Tagesspiegel reports. According to the paper’s information, the Bezirk’s 180 playgrounds are being taped off and fitted with bilingual signs declaring them closed to the public. Charlottenburg-Wilmersdorf’s vice mayor told a Tagesspiegel reporter that now “playground tourism” was a concern and a city-wide decision necessary. Our columnist Jacinta Nandi agrees!

Free University is sending as many staff as possible home to work remotely starting tomorrow (Friday, March 20) and all Berlin universities will offer students alternatives to sitting exams on-site. Thesis deadlines are to be extended since libraries are not accessible for the time being. According to the Morgenpost, TU has so far reported three cases, FU has stated they had one.

Senator of social affairs Elke Breitenbach (Die Linke) is proposing to offer housing for the homeless for when the cold season Kältehilfe runs out by early April. She told press agency DPA that her office was looking into extending the winter shelters’ rental contracts to support homeless Berliners during the Corona epidemic. She also emphasised the necessity of drug control in the shelters to keep infections down.

Train provider Flixtrain has decided to halt operations until April 19. E-bike rental comany Jump and e-scooter providers Lime and Bird have stopped serving the German market until further notice. Voi are keeping their scooters on the streets but have been advising customers to wear gloves when using them. Meanwhile Nextbike is offering users a free 30 minutes to get around safely.

The S-Bahn is limiting its services: from Saturday on, lines S26 (Teltow Stadt <> Waidmannslust), S45 (Südkreuz <> Schönefeld Airport) and S85 (Grünau <> Pankow) will be out of service until April 19. According to Berliner Zeitung, S-Bahn Berlin cites lower passenger counts as the reason for the measures. Traffic continues on parallel lines, with sections between Priesterweg and Teltow Stadt as well as between Adlershof and Schönefeld Airport slowed down to 20 minute intervals.

The project manager for the new Corona hospital Albrecht Broemme told RBB that the facility is scheduled to open in 20 to 25 days. He is quoted as saying: “The whole thing isn’t supposed to ‘maybe someday’ be ready.” He explained that the city never wants to be in a situation where “one has to select who gets ventilated and who has to accept their fate”. The hospital is supposed to get built at Messe Berlin in Charlottenburg and provide 1000 extra beds for people affected by covid-19. The time frame is certainly optimistic but hey, it’s not an airport!

The city’s hospital association has issued a call for help addressing all Berliners with medical training, asking them to approach departments matching their skill-set and email listing their qualifications and contact information. The call comes in anticipation of higher numbers of covid-19 patients. The association specifically asked for email contact so telephone lines remain open for patients seeking help.

GPs are running out of supplies. Berlin’s association of statutory health physicians is asking businesses to help provide protective masks, single-use gloves, protective glasses and disinfectant for local doctors’ practices to keep medical personnel safe prevent them from having to close their offices.