Following weeks of debate, the first Berlin students began their Abitur examinations today. First up, Latin. Though Latin isn’t particularly popular, students were required to obey strict social distancing rules, including sitting at least 1.5m from one another. In other exam news, the Senat has decided that special precautions will be made for relatives of at-risk groups. Those precautions may include using larger rooms and, in certain circumstances, allowing some students to sit the exam at home or even repeat the school year.

The BVG will resume its normal schedule on Monday, May 4. Until then, services will gradually increase before returning to pre-crisis frequency. The corona crisis has seen services reduced by 13 percent. A spokeswoman for BVG said that plummeting ticket sales caused the organisation to lose more than half a million euros per day.

The CDU has called for Berlin’s shops to remain open on Sundays for the rest of the year. The rules for Berlin retailers have been relaxed during the lockdown, allowing them to open on Sundays. This new request aims to help the retail sector bounce back once the lockdown has ended. The CDU has even drawn up a “Berlin Pact” to specifically outline how restrictions could be loosened in the coming months.

As Berlin’s restaurants and physical shops struggle, online retailers have boomed during the lockdown. In order to deal with the increase in package volume, DHL would like to deliver on Sundays. They’ve already submitted an application to the authorities and say that it may help “avoid a collapse of the parcel system.”

Around 300 employees of Berlin hospitals like Charité and Vivantes have renewed their demands for an additional €500 per month in light of the coronavirus crisis. They made their case during a video conference on Friday, which was attended by Berlin MPs representing parties such as Left, Greens, CDU and FDP. Verdi, the union representing the hospital workers, also asked the government to ensure the availability of protective clothing, especially as lockdown measures are being loosened.

Berliners don’t seem like they will let their May Day demonstration be taken away. Numerous calls to demonstrate on May 1 have been published online, including on the left-wing site Indymedia, which calls for Berlin and nationwide protests despite corona rules under the motto “Illegal, legal, scheißegal”. The Senate will decide tomorrow what rules will be loosened from April 27, and what that means for the right to demonstrate. The Left Party and Greens have asked for looser rules on demonstrations, as long as minimum distances are enforced.

Masks to be finally be made compulsory in Berlin, or at least that’s what seems to be coming our way. There have repeated demands across the political spectrum, including from the Health Senatorin and Mayor Müller himself, who’s supposed to introduce a proposal in favour of compulsory masks in shops, and public transportation. The Greens are against the proposal. 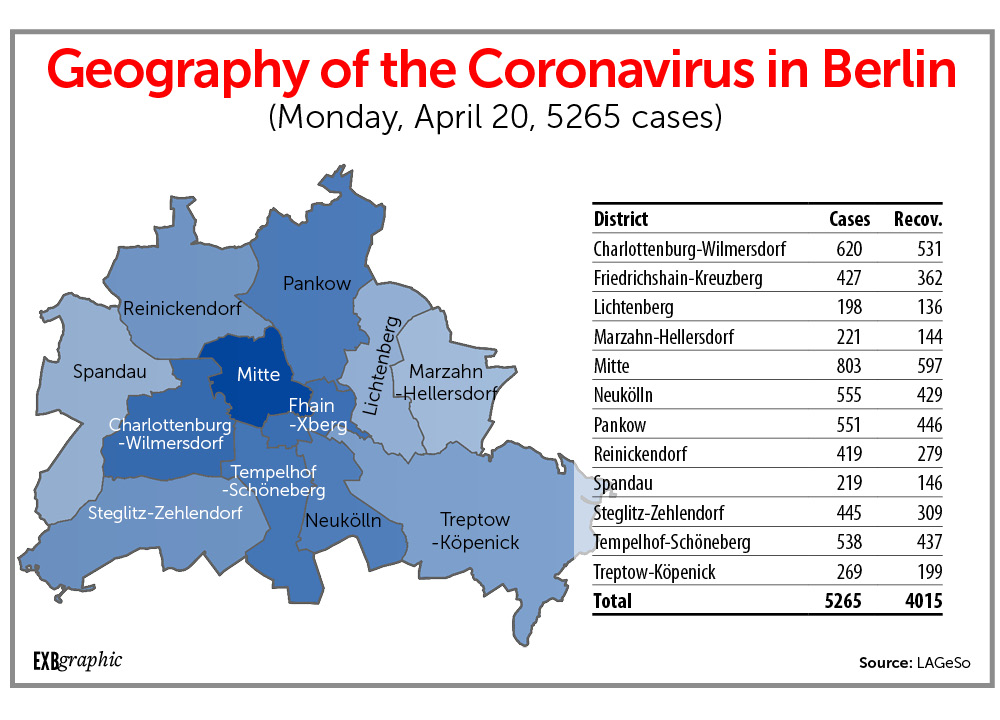 Berlin’s second drive-in testing centre will open in Mitte. The first is currently being installed in the carpark of Neukölln’s Estrel Hotel, and should be operational by April 27. You won’t even need to leave your car to be tested, as the mouth swab is taken through the window. You can also go by bike or foot. The centres are aimed at local residents experiencing Covid-19 symptoms. They must register by phone with the public health department before dropping by, and priority will be given to people who have been in contact with someone who has tested positive for Covid-19.

The grocery supply charity Berliner Tafel reached 10,000 delivery bags today. After its distribution centres closed, a special delivery service was set up in order to provide food to those in financial need. For the last three weeks, volunteers have run a special delivery network to supply families with bags, as well as handing them out at pickup points around the city. Chairwoman Sabine Werth said the service will soon reach its limits if more people lose their income. At the moment, that limit is 800 bags per day.

Some good news from clubland:  the internet campaign United We Stream has now raised over €400,000 for Berlin’s clubs. Pamela Schobeß from Berlin Club Commission confirmed the milestone while praising the initiative during an interview on Sunday night, but predicts tough times ahead for electronic music. In the interview, she called for public funding to help protect the club scene, which employs over 9000 Berliners and generates €170 million each year.