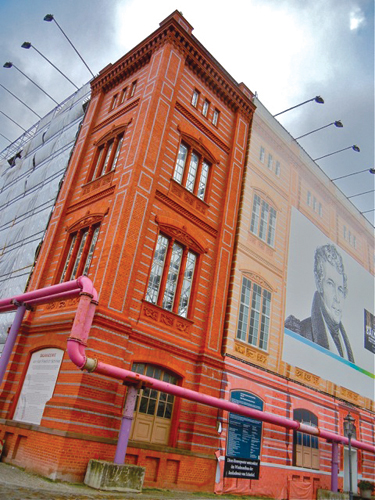 That growing pit in the heart of Berlin’s Museum Island means one thing: the Prussian imperial palace is rising from the dead and nothing can stop it. Should Berlin be rebuilding its long-gone landmarks? It’s a moot point – we are. So let’s shed a tear for another architectural ghost awaiting its turn at resurrection. It’s just across the river from the palace, one-tenth its size but 10 times more important: Karl Friedrich Schinkel’s Bauakademie.

If you don’t know Schinkel (1781-1840), you don’t know Berlin. He was architecture’s answer to Beethoven and Bach, and his best buildings are here. For a primer, head over to the Kulturforum for the superb exhibition Schinkel: Geschichte & Poesie  (History & Poetry).

Schinkel started out  decorating stage sets  and painting romantic  landscapes, but his  buildings are thoroughly  rational. He used  historical styles, but he  championed Greek  classicism over Roman  – it was “too French.  Napoleon’s hated armies  had been driven out of  Prussia in 1813. And  Gothic was the style of German nationalism at a time when the independent German lands were striving for political union.

In 1826, Schinkel toured Great Britain in search of ruined castles and ivy-covered churches. Instead, he found the future. The Industrial Revolution was transforming society, the economy – and architecture. Schinkel was confounded by the strange, mutant buildings: spacious machine halls with iron skeletons and plain brick façades. He came home to Berlin a changed man.

The Bauakademie was the branch of Berlin’s Art Academy that taught building design and construction. In 1831, Schinkel proposed a new home for the school that embodied the ideas he’d picked up in England. It was super-rational: a square plan with an open grid of structural columns, and four identical façades with eight equal bays. Instead of using historical styles, Schinkel created his own: a stripped-down classicism in brick and terra cotta. When it was finished in 1834, the Bauakademie was like nothing anyone had seen before. Schinkel had invented Modern Architecture.

The building inspired generations of designers. In Berlin, the Martin-Gropius-Bau (1881) is a clear homage, and Mies van der Rohe’s Neue Nationalgalerie (1968) is Schinkel’s building carried to its super-rational conclusion. The early skyscrapers of New York and Chicago are the Bauakademie stretched upwards. As a school, it inspired the 1920s Bauhaus. But none of that could stop the East Germans from tearing it down in the early 1960s to make way for a sterile office block, their Ministry of Foreign Affairs.

Then came Berlin’s reunification and calls to restore its historic centre – and erase evidence of East Germany. The Ministry of Foreign Affairs was knocked down in 1994. A foundation headed by Berlin’s alpha architect Hans Kohlhoff (he did the brick tower at Potsdamer Platz) lobbied to rebuild the Bauakademie. Today the building is back, sort of. One corner has been recreated in brick; the rest is printed on a giant vinyl shower curtain. Don’t laugh – that’s how the rebuild-the-palace campaign started in the 1990s.

Supporters of the rebuilt Prussian palace, now known as the Humboldt Forum, had to scrounge to find tenants for its cavernous halls. The Bauakademie won’t have that problem – it can pick up where it left off, as an international centre focused on new building technologies.

Berlin’s government supports the Bauakademie project but won’t pay for it. They put the site up for auction, hoping a private developer would restore Schinkel’s lost masterpiece, but found no takers. The estimated cost: €20-50 million. The Humboldt Forum’s (conservative) price tag: €559 million. Its stone façade alone will cost twice as much as the whole Bauakademie.

Will the Bauakademie ever get rebuilt? It may have to wait until the Humboldt Forum has risen from its hole and quits sucking up all the resources. In the meantime, head down to the recently restored Schinkel Platz, squint at the Bauakademie’s vinyl façade and dream of the real thing.

Dan Borden will lead a tour of Schinkel’s Berlin on December 15 – register at [email protected].

The exhibition Schinkel: Geschichte & Poesie runs through January 6 2013 at the Kulturforum.