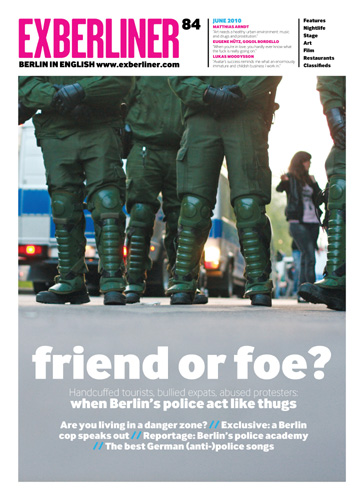 The June issue of EXBERLINER originated in this editor’s fateful encounter with two bad Berlin cops one icy afternoon in February.

In my nine years here, I had never come close to a Berlin police officer, until February 23, when a German driver almost ran me over and the police got involved. When the two cops – a man and a woman in the old green uniforms – saw me, it was hatred at first sight. In no time, they had let the driver go and, to my surprise and dismay, violently ordered me to get into their patrol car. I objected, pleading for an explanation. They offered none, glared into my eyes and hammered away: “You’re gonna do what you’re told, aren’t you?”

The man reached into his rear pocket and pulled out a set of handcuffs. Then he pressed them into my ribcage, forcing me backwards until my back was arched against the police car. I was trapped. For good measure, his female colleague came within a hair of my face and shrieked like a sergeant major in a marine boot camp: “N-O-W YOU-RE GON-NA COM-PLYYY!!!” I was paralysed; dizzy with terror. I had lost all faith and courage. This was the police: they were the ones with the monopoly on “legitimate violence”, in the words of good old Max Weber. There was no one else I could turn to, so I gave in.

An hour later, I left the police station with the Dienstnummern (ID numbers) of my two bad cops in my pocket and a very bad taste in my mouth. Never, ever had I imagined such an incident could happen to me in Berlin.

In past lives, I have seen my share of corrupt uniforms and lawlessness – in Moscow, in Chechnya. But this time it felt different. Maybe because it was Germany, 2010; perhaps because one’s perception of violence is inversely proportional to one’s expectations. I remembered Sarah-Jane’s predicament, her feeling of being treated “like a dog”, her bewilderment, her helplessness (see “When cops act like thugs”). In both cases, neither our physique nor our actions justified the police’s use of violence.

The other side of the looking glass

“When life gives you lemons, make lemonade,” my great aunt used to say. This little misadventure acted as an eye-opener. I started to relate my story to friends, colleagues and acquaintances. Most were shocked and sympathised; some (only Germans) questioned my behaviour – I must have done something wrong! People started to share their own stories and a new, so far unsuspected, world of bad police using their power to abuse citizens opened up to me. My meetings with two or three jaded lawyers (“Filing charges against the Polizei is a lost cause!”) only made my impression worse.

The numbers are there to vindicate their pessimism: only one to two percent of all criminal proceedings filed against police officers in Berlin result in a conviction. It’s less than one percent for cases involving bodily harm. With such alarming numbers, it’s no wonder Berlin is on Amnesty International’s radar.

So, bad police and no justice? My helplessness and their impunity, the many other cases, the numbers – all called for action. This is, after all, what the press is there for.

The Berlin police claims to have improved its track record on abuse and its relationship to Berliners in recent years. Police chief Dieter Glietsch has the reputation of a man of integrity who’s worked to build a modern police force; recent efforts at integrating more minorities among its ranks speak for this (see our reportage about the Berlin police academy on page 14 of EXBERLINER’s June Issue). Our fancy mayor and his “be Berlin” marketing minions are never short of a slogan to brag about the city’s unique brand of hospitality, but “Herz & Schnauze” or not, it’s clear the Berlin police still has a long way to go.

Understandably, it is not always easy to be a police officer (see our confidential interview with a veteran policeman). But for all the competent cops who presumably do a good job, there is a handful of nasty, authority-abusing, vindictive ones who don’t deserve the responsibility they’ve been conferred. No crime without punishment. This should apply to the police too – especially to them.

Breaking down the wall of silence

This issue is the fruit of arduous collaborative work. Our investigations were not always easy: abuse victims were difficult to track down; others refused to be quoted. We had to rely on a network of personal contacts and experienced professionals – lawyers and human rights experts. Access to the police proved even harder to come by. Police officers don’t talk to the press. Those who did, agreed to do so only on condition of strict anonymity. Some information is kept secret, like the list of the famous “danger zones” (see page 18 of EXBERLINER’s June Issue). Without the help – the contacts and savvy – of the crime editor of a famous German paper, who I’d like to thank here, this issue would have been mission impossible.

As its officers finally don their beautiful new (blue) uniforms (see “The new police chic” on page 16 of EXBERLINER’s June Issue), it’s high time the Berlin Police aired its dirty laundry and cleaned up its act: be cop, be Berlin, be squeaky clean!

May this issue be regarded as our humble contribution to making this city a better place. “The police? We need them: there’s gotta be some order in the house!” said one of our street poll respondents. May the Berliner Polizei bring some order to its own house. After all, Ordnung muss sein!