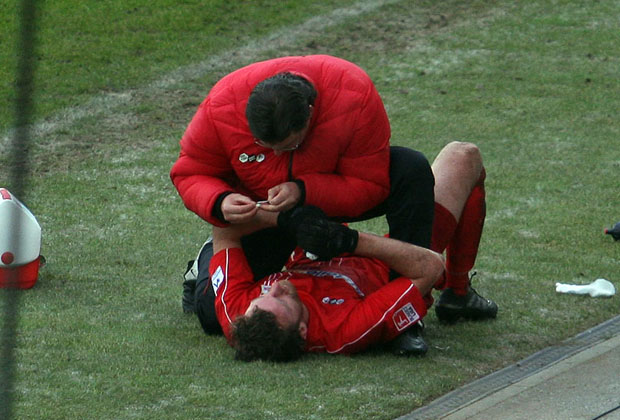 Crushing reality. The doldrums, call it what you will, but on a shitty grey Sunday what else is to really be expected. Everywhere was showing Hertha and the sportsdesk was set up in exile, stuck with only the SKY TV Konferenz – for the uninitiated a weekly ritual of pointlessness where they screen all the live games simultaneously, flicking between the grounds so you can see all of them but understand or comprehend none.

Still, who can blame them? FSV Frankfurt marauded past Oberhausen 4-0 whilst Hertha beat Düsseldorf in a brilliant game 4-2. The SKY team kept going back to the bored commentator in Fürth, where 1.FC Union Berlin were reasserting their right to play uncharismatic football, in an uncharismatic stadium, on a pitch that looked like it had been ploughed up. You know those Lego recreations of goals? Well, those pitches are more conducive to a passing game, and in comparison to the field in Fürth look like God’s own green, green grass.

After last week’s slicker than crude display against Aachen it was a shame to hear that John Jairo Mosquera and Patrick Kohlmann had picked up the flu going around, but at last there were discussions around the ground about the business of football and not the betting scandal currently whipping journalists into a frenzy James Brown-style. Everyone’s talking loud, but saying nothing. Kohlmann’s absence also denied the ranks of the fourth estate the chance to use a million clichés, being a lucky Irishman taking on the cloverleaves as well.

Despite being connected to a match-fixing inquiry (not that he’s implicated in throwing a match) Björn Brunnemann was unlikely to play anyway. Since he’s been injured Paul Thomik reinvented himself as Luis Figo (last week at least) and Michael Parensen came back from injury. He is behind Chinedu Ede, too, in the list of wingers, and even Santi Kolk, who took the left-hand berth today. Santi is a proper footballer, quick and blessed with a beautiful touch, he started off brightly, and set up chances for Macchambes Younga-Mouhani and Halil Savran, but he missed a sitter early on. Union need him to start scoring and not just sashaying past players. His square pass for the effort that Younga-Mouhani blazed over the bar was joyful to watch, but they only count if they go in the goal. On his own up front, Savran had another thankless task, it is hard to hold the ball up and bring others into play if they are lumbering and shaky in front of goal. Younga-Mouhani has never exactly been Gerd Müller.

This is what Fürth wanted, a scrap. The ball might have well been square for all the momentum it took off the pitch. Even the commentators were drifting off as the goals went in around the country. “Four goals in Frankfurt, four in Berlin…. and many adverts in Fürth” was one’s pithy take on it. He looked as cold as a witch’s tit out there. Fürth were the better team, but they sure aren’t pretty.

On the forums fans are already complaining about Uwe Neuhaus’s use of the 4-5-1, but to be fair, looking at the state of the ground, a point would have been great for Union. After a week that he would probably rather forget, comes a game that he most certainly won’t remember. Apart from Jan Glinker. Felix Klaus’s finish was clean as he swirled around Michael Parensen, but a top ‘keeper shouldn’t be beaten at his near post, and Glinker will know that. Marcel Höttecke, waiting in the wings, laughing to himself as he rubs his hands together like Mr. Burns, knows it too.

Dominic Peitz went off with a broken nose and could be missing for up to six weeks. He will be missed, especially as his replacement, Berndt Rauw, was sent off for elbowing Nicolai Müller in the face. We’ve seen worse, he was being wound up as he tried to take a throw-in injury time but he had to go for it. It left Union no chance really to get back into a game they had been chasing anyway. The pace of Karim Benyamina and Ede (both on as subs) helps, but there was nothing still coming from behind them to exemplify the threat. The choice of two sechsers was a pragmatic decision though, to be taken in context.

This one can be written off. Another grey Sunday. Another grey, away loss. It’s not the end of the world, and Union is still in 12th. Yet still, somehow Fürth are in touch with the top of the table. They would get murdered in the Bundesliga if they got promoted, but as well as their crop of youngsters this year’s potato crop they are growing at the Trolli Arena looks like bringing in a bumper harvest.