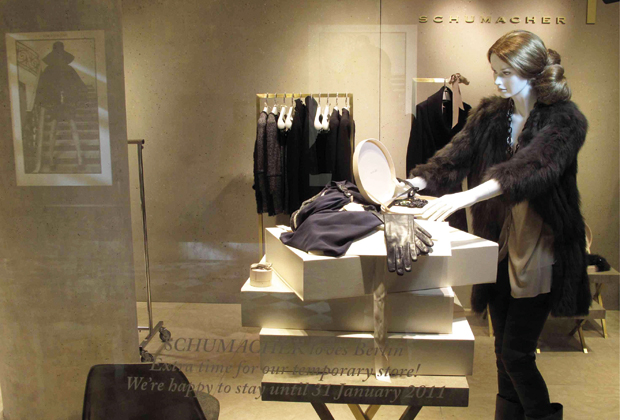 Designer Dorothee Schumacher, with her unfailing dedication to flattering women’s wear, was the obvious choice to profile for Exberliner’s Beauty Issue.

The timing is also perfect, as the glamorous Schumacher pop-up store in Quartier 206 is extending its stay until the end of January. Now is the time for a wardrobe overhaul!

She has a respect for femininity grounded in tradition, at a time when young designers are challenging the female form with asymmetric cuts and masculine tailoring.

Schumacher proves that ultimately, it is classic styles that will last.

Today her clothes are sold in over 40 countries worldwide, and she was the only German designer to feature almost an entire collection in the hit movie The Devil Wears Prada. This led to a spin-off when a German TV company filmed a short documentary entitled The Devil Wears Schumacher, on the designer and her atelier team in Mannheim.

She kept her base in the industrial German city despite the international demand for her clothing. “I want women to feel good in my designs,” the designer says. So grab the chance to visit the temporary Berlin store to stock up on classically-designed pieces that will stand the test of time.