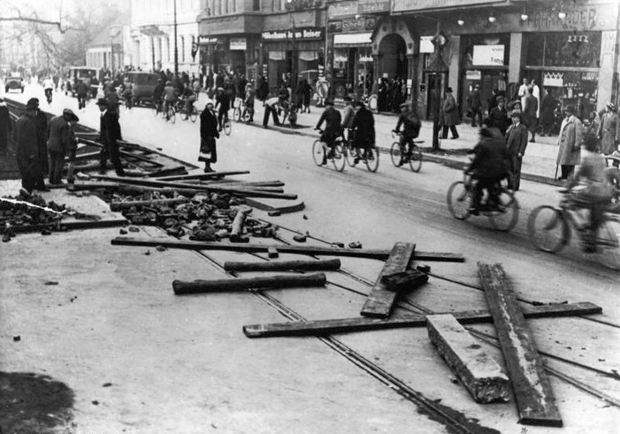 In November 1932, just three months before Hitler came to power, thousands of Berlin transport workers paralyzed the capital for four days. This strike against a wage cut, which left four people dead, was the last big workers’ struggle under the Weimar Republic. On the last day of the strike’s anniversary, Wladek Flakin looks back 80 years.

Thursday, November 3, 1932: In the first gray light Berliners hear the rain and see the dead leaves falling. But something is different. “What is missing?” asked the now-defunct liberal newspaper Vossische Zeitung. “The squeaking of the tram wheels, the distant, subterranean sough of the subway… what’s missing is traffic!”

On a normal day, 900,000 Berliners would travel to work on the trams, busses and subways of the BVG, the city-owned transport company founded in 1929. But on this Thursday, they stand confused at the locked gates of the stations before grabbing a bicycle, walking to the next S-Bahn or finding colleagues to take a taxi.

Workers of the world, awaken!

In the middle of a global economic crisis, the BVG tried to cut wages by as much as 23 pfennigs an hour – the fifth wage cut since 1929. At the same time, the management, including members of the SPD, had raised prices and put whole lines out of service, partly to pay for major corruption scandals. Unemployment had risen to 25 percent, and with limited social welfare, the use of urban transport had gone down by half. And sentiment amongst workers toward the social democratic Bonzen in charge, who pulled in a swagger-worthy 300,000 DM per year, wasn’t running particularly high.

After a series of delegate conferences, all 22,000 employees were called on to vote. With 14,471 yes votes, the strike had a clear majority.

On November 3, the strike was solid. Not a single subway or bus went out of the depots – there were only a few trams sent on “demonstrative trips” in order to create the impression that everything was normal. But these trams were mostly empty, since riders were scared of the mobs of strikers throwing rocks and breaking windows. By the second day, the government had declared the whole strike illegal and armed police were riding on the fronts and the backs of these trams.

Two political parties brought out their fighting groups to support the pickets: the Communists (KPD) and, surprisingly, the Nazis. Otherwise mortal enemies, they blocked depots, fought against the police, ripped up track lines and otherwise sabotaged the BVG service – sometimes together, in what would inaccurately be described later as an action of the “Nazis and Kozis” against democracy. On the strike’s 75th anniversary, Spiegel wrote that “Walter Ulbricht, the head of the Berlin KPD and later founder of the GDR, and Joseph Goebbels, the Gauleiter of the NSDAP, were pulling the strings.” This image of a strike provoked by left- and right-wing extremists has gotten a lot of mileage. But does it fit the numbers?

Of the more than 14,000 workers who voted to strike, only 1137 were in the KPD’s trade union organization RGO, and even fewer were in the Nazi union NSBO. Most were older workers with families and a loyalty to the social democratic unions – but they felt they had no other option than to fight. They enjoyed the sympathy of the Berlin population, especially the women. As a secret police report said: “Women are involved” in the street fighting “at a level that has never been observed in Berlin before.”

What was Goebbels doing there?

The Communists had always supported strikes, but for the Nazis – mostly a party of the impoverished middle classes – this was a novelty. Goebbels explained in his diary: “Many bourgeois sectors will be scared away by our participation in the strike. But that is not decisive. These sectors can be won back later easily; but if we lose the worker, he will be lost for good.” In fact, in the elections on Sunday, November 6, the NSDAP vote did go down, but not as dramatically as expected, and less in the working class neighborhoods. The KPD, at the same time, became the strongest party in Berlin with 31 percent.

But after four days, the strike front broke and over the course of the following Monday, most strikers returned to work. Their wages were cut, as planned, by two pfennings an hour and 2850 workers lost their jobs and were condemned to unemployment. Over 500 people were arrested and four were killed by the police. Within three months, President Hindenburg gave the chancellory to Hitler – who could claim that he had enough support amongst workers to prevent strikes like the one at the BVG.

The BVG strike, argues former communist and historian Günter Reimann, represented a chance to stop the rise of Nazism. Only a united struggle of the workers, passed like a spark from the BVG to the S-Bahn to other big companies, could have brought down the government of forced wage cuts and repression. As he writes in his remembrances: “Hitler’s

victory was not unavoidable.” But the defeat of the BVG employees was indicative of the problems in Germany – and when Hitler was named chancellor, there was virtually no resistance. In the following weeks and months, all workers’ parties and trade unions were banned by the Nazi dictatorship.

Eighty years later, problems in Berlin’s public transport system are more likely a product of defective equipment than of striking workers. But the world is again in an economic crisis and the workers of the BVG are again being asked to accept worsening conditions. The lessons of 1932 are clear: struggle can be successful, but keep an eye on your allies.