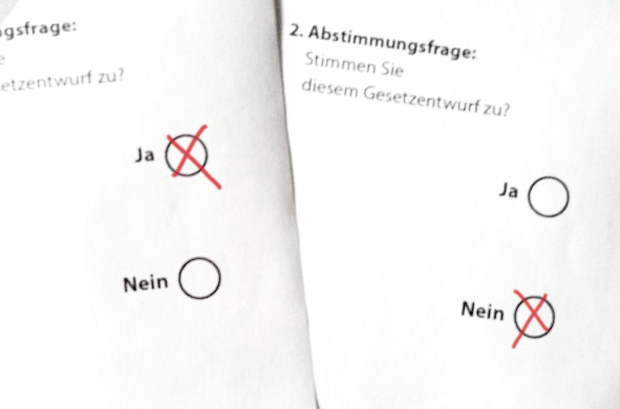 On May 25, Berliners can vote on whether the Tempelhofer Feld should be turned into a sand-box for realty speculators or maintained as an eccentric park. As with any political debate with billions of euros in profits at stake, the air is thick with misrepresentations. So, what are the biggest lies? Who’s doing the lying? And how should you vote if you want the field to stay the way it is?

1. The ballot paper is lying to you.

But there’s a second question right below: Do you support the “Gesetz zum Erhalt der Freifläche des Tempelhofer Feldes” (law to conserve the open area of the field)?

Sounds good too, right? But this other law from the Senat would allow for a “Randentwicklung” – that literally means a “development of the fringe”, but actually means that over 100 hectares will be turned over to realty speculators to build luxury condos, expensive shops and other buildings for the city’s extremely wealthy. The law’s misleading name doesn’t mean they have something to hide, right?

The PR company advocating construction, Tempelhof Projekt GmbH and owned by the city, says they are planning to build “affordable housing”. But look at the numbers: They want to build 4700 apartments. There is an agreement – legally non-binding – between the city and realty companies that 850 apartments should have rents between €6-8 per square metre.

Obviously, €8 per square meter is not affordable. If a person living in such an apartment loses their job and has to go on Hartz IV, the Jobcenter will force them to move out. I asked if that was affordable at PR company’s information pavilion. “Well, the apartments won’t be for unemployed people,” I was informed.

So 850 apartments will be expensive but somehow “affordable”. By definition, that leaves 3850 apartments – a full 82 percent – that will be “unaffordable”. It’s true that the plans aren’t finalized yet. We could be optimistic and hope the rest will be cheap. But this government hasn’t built a single social apartment for 10 years – are they going to start right when park-side real estate opens up?

3. Seymour Gris is lying to you.

Now Seymour Gris is an optimistic guy. But he can’t really be naive enough to think that building “will have a positive effect on rental prices,” as he wrote back in January on this site. The luxury condos will be sold to Russian oligarchs and Qatari sheiks who need a place to park some capital. Maybe they’ll even drop by once a year for a crazy party. But that won’t free up any Berlin apartments.

In fact it will raise the rent index in neighbouring districts, thus allowing rent increases for old apartments too. If Seymour is so excited about throwing money at Berlin’s construction mafia, why doesn’t he just put some cash in an envelope and stuff it in their mailbox?

And before anything could be built on the field, the taxpayer will have to shell out at least €180 million to build streets and sewers, according to a secret internal report.

4. This whole referendum idea is lying to you

The information pavilion refers to Bürgerbeteiligung (“citizens’ participation”). Its windows were smashed on April 12. Angry Berliners spray-painted: “This is our form of citizens’ participation!” Because the government has held some public discussion forums, but always carefully stage-managed to prevent citizens from saying anything.

Last year we asked people at the field to sign a petition in favor of construction. We collected exactly 0 signatures. Now satirical activists have called for filling the Weißensee and building apartments there – the idea is equally popular.

This might be more democracy than usual, but expats still can’t vote. Even EU citizens who will be voting in the European elections on May 25 won’t be allowed to vote on the park.

Don’t put up with everyone lying to you. Vote “JA” on the ThF-Gesetz and “NEIN” to the senate’s proposal. And if you can’t vote, then convince someone who can.