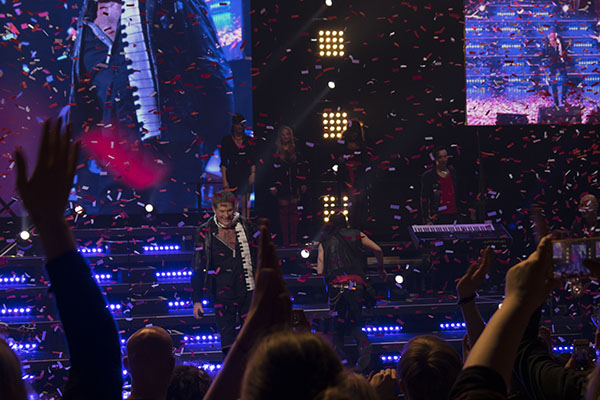 Avocado Johnson goes to that thing you’re curious about to answer the question: Are you missing out? This time: David Hasselhoff’s “30 Years Looking for Freedom” concert.

As soon as I walked through the door of the Friedrichstadt-Palast, I heard it. A thunderous chant emanated from the concert hall, the sound of thousands of Germans raising their voices as one.

When I told my German millennial friends I was seeing David Hasselhoff in concert, they agreed their country still appreciated the Baywatch star, but only ironically. They were wrong. Nothing could have prepared me for the raw, full-hearted devotion demonstrated by what I now know is called the Hoff Army.

I’d expected housewives, and they were there. But so were entire families waving blow-up Baywatch rafts, pierced teen Goth girls, older guys with ZZ-Top beards and vests emblazoned with metal patches. And then there were the many, many groups of youngish German bros treating the concert like a football match. They were the ones leading the chanting, occupying entire rows in matching “Don’t Hassel the Hoff” shirts, bellowing the lyrics to “Flying on the Wings of Tenderness” with open arms and whipping off their shirts when particularly overcome. The Friedrichstadt-Palast’s decision not to serve alcohol during this show suddenly made a whole lot of sense. 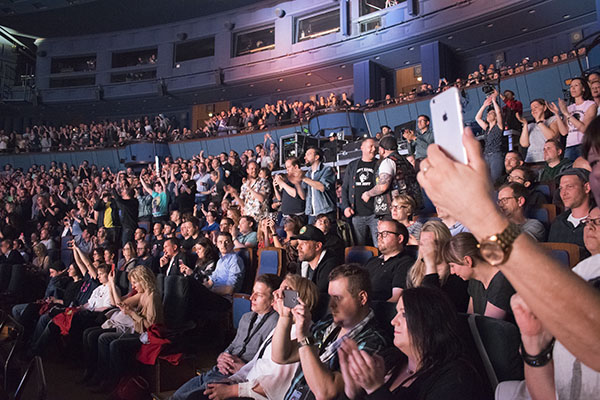 It would be one thing if the appreciation was only one-sided, but it wasn’t. Hasselhoff enjoys a symbiotic relationship with his German audience in which he returns their love with such generosity that they end up loving him even more. The result is a kind of love ouroboros that eventually got so intense that a few audience members felt compelled to run onto the Friedrichstadt-Palast’s low stage to embrace their hero. Security chased them off, but the Hoff didn’t look all that hassled.

The show lasted three hours, including one intermission, five quick-changes and six interstitial “Hey, hey, hey, Hasselhoff!” chants. (Seriously, these bros did not let up.)

The actual music tilted toward straight-up Schlager, another reason why Hasselhoff’s so big here. By now he obviously knows what sells, from a red-jacketed performance of the Baywatch theme to “Hooked on a Feeling” to a cover of German-beloved evergreen “Country Roads” that had the whole Palast on their feet. “It’s a Real Good Feeling”, from the 2011 “comeback” album, went over huge, as did the tongue-in-cheek “True Survivor” from 2015’s crowdfunded action homage Kung Fury.

By the encore, everyone knew what was coming. Video footage of the Berlin Wall began playing on the screens behind the stage, the audience held their breath… and Hasselhoff launched into the German-language version of Bowie’s “Heroes”.

This confused the audience, who gave the song an uncharacteristically subdued response. (A friend later reminded me that Bowie, unlike certain TV personalities, was “never all that big here”.) But then, a low rumble on the synths. A piano-key scarf. A light-up jacket. And there it was: “Looking For Freedom”. Hasselhoff belted the chorus, nearly drowned out by the ecstatic crowd as video screens displayed him wearing that exact same outfit on New Year’s Eve, 1989, singing from a crane overlooking a crumbling Wall – the day Berliners knew that, now and forever, the Hoff was on their side.

There was no second encore. How could there be? There was only Hasselhoff beaming beneath a shower of confetti, taking a bow with his band as he proclaimed, “Ich liebe euch alle!” And at that moment, I, too, couldn’t help but love him back.

FOMO Factor (How much should you regret missing out on this? 0 = sigh of relief; 5 = slap yourself in the face): 3. Five for the experience; points docked for the €50-plus ticket price. The Hoff will be back at the Friedrichstadt-Palast on Monday, April 30.