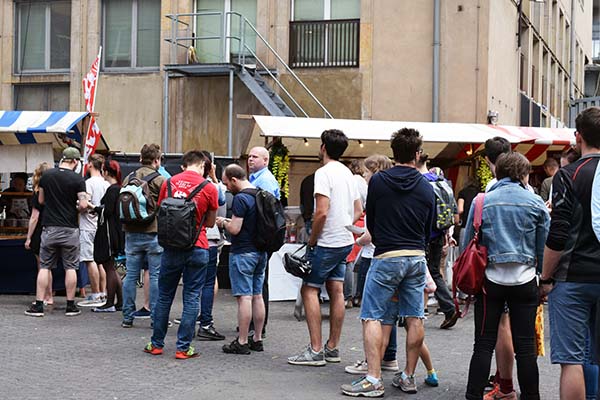 Avocado Johnson goes to that thing you’re curious about to answer the question: Are you missing out? This time: The Dumpling Festival.

Attendees of the Dumpling Festival Berlin 2018 should have known what they were getting themselves into. This had all the makings of a classic clusterfuck: a shady organiser known only as “We Love Asian Street Food”, barely any vendors named in advance, repeatedly shifting dates and locations, 47,000 Facebook RSVPs (that’s half the population of Mitte). As if that weren’t enough of a warning, two days before the Saturday kickoff The Guardian published an entire trend piece on why food festivals are almost never successful.

Yet somehow, the social media hordes still managed to be surprised at what they found in the asphalt courtyard of Mitte’s Alte Münze on Saturday. The Facebook event page flooded with complaints about entrance fees, massive queues, sky-high prices and not nearly as many dumplings as advertised. There were even a couple (unsubstantiated) reports of food poisoning.

Always up for some schadenfreude, I tagged along for lunch on Sunday. But instead of the Fyre Festival-scale disaster I’d eagerly wished to document, I found… dumplings. More than I expected, actually – 15 vendors by my count; less than the announced 25 but more than the “7 or 8” estimated by angry commenters. They ranged from restaurants like Tak Tak, Lecker Song and Mam to a Mongolian food truck to anonymous sellers of pre-frozen steamed buns and “Nacho Dumplings” (basically deep-fried cream cheese-filled wonton skins).

And whether because most people had already gone Saturday or because the Facebook warnings had scared everyone off, the crowds weren’t that bad. You didn’t even have to wait in line if you were willing to forego “Asian Street Food” in favor of Turkish manti or Russian piroshky. (Most weren’t, opting instead to form a massive queue for Japanese octopus balls aka takoyaki, which AREN’T EVEN DUMPLINGS WHAT IS WRONG WITH YOU PEOPLE.)

All this is to say that what I experienced was likely the very best version of the Dumpling Festival – and even then, it was a giant rip-off. Not as much as the “Berlin Sushi Festival” that turned out to be a Facebook phishing scam, but not far off. Paying €4 for the chance to spend €2-7 on bite-sized portions of mediocre food is just plain extortionate. So is having your water bottle confiscated by security guards so you’ll be more tempted to get a €4 Becks. Audience expectations may have been too high. But the complaints were 100 percent justified, which made it all the more infuriating when the only acknowledgement “We Love Asian Street Food” gave to its 100-plus dissatisfied customers was to call them Nörgler, “whiners”.

Did Berlin learn its lesson from this? A quick scroll down my upcoming events reveals one dubious street food festival after another: the “Orient StreetFood Festival 2018”, the “American Food Festival”, the “1. Döner Festival”. As they pile up, there’s only one way to keep from falling victim to Dumpling Festival-style disappointment.