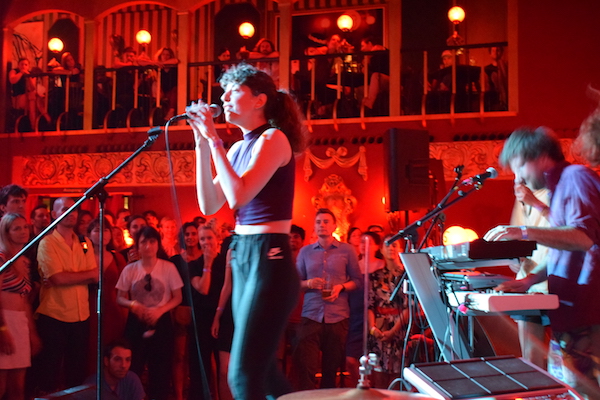 Avocado Johnson goes to that thing you’re curious about to answer the question: Are you missing out? This time: Torstraßen Festival and Exberliner’s birthday.

Ah, Torstraßen Festival. The one time of year Mitte pretends it has decent live music venues left, Neukölln chillwavers pretend they know what the Volksbühne is and anyone with any self-respect dares to stick their head inside Kaffee Burger. It’s been eight years since the music fest began, and while the diversity of local scenes represented isn’t quiiite as huge as the organisers think (oh hey Itaca, half of Itaca, and folks who share a drummer with Itaca) you’re still guaranteed at least a few exciting new discoveries, affordable ticket prices and a fun Mitte-cation for all. This year had the bonus of overlapping with Exberliner’s birthday party, held at old dancehall (and new TSF venue) Ballhaus Berlin. In honor of our sweet 16, a few high-school-style superlatives for Saturday:

Most liberal definition of “Torstraße”: This year, only two venues were actually located on the namesake street – Kaffee Burger and Gäststätte Prassnik. The rest stretched from Chausseestraße to the Grüner Salon, meaning 2.7km worth of scorching pavement to navigate between sets. Mental note for next year: bring bike.

Cutest duo: 18-year-old wunderkind Saba Lou playing with former wunderkind and continuing Chuckamucker Oska Wald was a DIY garage-folk match made in heaven. In the audience at ACUD: both his mom and her dad (who we hear also dabbles in music from time to time).

Most appreciated fan: The one in the front row of sweaty new venue Chausseestraße 131 (aka The Bar Formerly Known As Larry), which damn near saved my life as it blew air into my face during a midday set by German indie lads Trucks. Did I mention it was hot out?

Best smell-o-vision: Albertine & The Sticky Fingers justified the Itaca quasi-double-booking with a set of funked-out art pop that was more Adrian Belew than Adriano Celentano, during which the flautist (yes, flautist) passed out fragrance strips to accompany a lyrical monologue about “the perfume equivalent of Sofia Vergara”.

Least compatible crowds: Every year, the bars and Spätis between Rosa-Luxemburg and Rosenthaler Platz try to piggyback on the TSF action with open-air techno parties, attracting tourists in for the “authentic Berlin” experience. “I can’t believe Mitte’s like this every day!” they shriek before vomiting frozen strawberry margarita onto a festivalgoer who’s only there to see Ukranian experimental trio Nisantashi Primary School.

Biggest Ballhaus-related disappointment: The table phones, a kitschy leftover from the ballroom’s 1920s glory days, were wrapped in plastic for the evening. No analogue flirting for Exberliner partygoers.

Best DJ troopers: Gene and Vlad, the Russian duo who gamely agreed to replace Joey Hansom at the last minute but had their set cut short because it was just. too. hot. to keep dancing indoors. Catch you later, comrades!