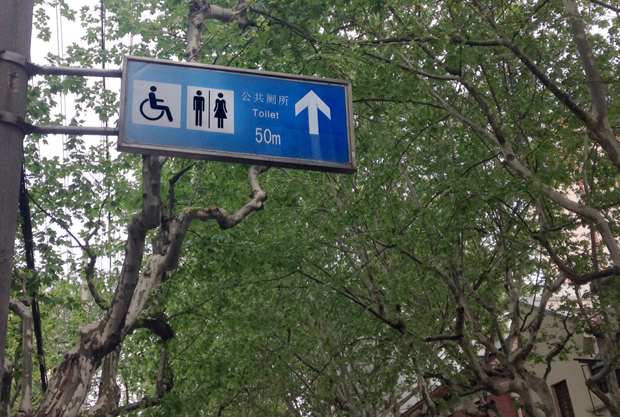 I just got back from China and I feel like a star. In the provinces, people would flash dumb smiles and take pictures. “Y’all act like you never seen a white person before.” I’m certain I’m trending on Chinese Instagram.

Everything you’ve heard about the Middle Kingdom is true: The smog is suffocating, the internet is censored (no Facebook!) and the constant spitting is hard to get used to. And political protest is limited to government-approved Free Speech Zones.

But one thing about China amazed me. It wasn’t the Great Wall (even though I loved the Game of Thrones aesthetic) or Shanghai’s Bund. No, it was the Great Public Toilet – you can’t walk 10 steps in a Chinese city without seeing a pictographic man and woman on a sign.

This made me think about our freedoms in Germany. Sure, I can browse Facebook until my data plan runs out – but can I really enjoy all those cat pictures while I’m desperately searching for a bathroom in Berlin? Here, I have to plan my day around toilet access: “If I have a coffee now, I’ll have to swing past that one café at 3pm…”

Options here involve sheepishly asking in a restaurant or dodging behind a bush (which not only discriminates against women, but is also technically illegal and not terribly hygienic). The worst option is City Toilette, which cost 50 cents and clean themselves like the inside of a dishwasher after every use. The one by my house is always covered in urine – Berliners are a rebellious bunch, aren’t they?

So just walking into a relatively clean and free restroom in China gave me a feeling of Freiheit. Am I making too big a deal about this? As Manic Street Preachers famously declared, “Freedom of Speech Won’t Feed My Children“. I’ll take that idea further: What good is my right to publicly criticize the government if I don’t have an opportunity to empty my bladder?

Germany is one of the richest societies in the history of mankind, but in its capital people can’t fulfill their most basic bodily needs. In Beijing or Shanghai on the other hand, sure, going to a demonstration might get you arrested and then thrown into a secret prison for months, but at least you won’t have to cross your legs while you’re doing it.

Why is China like this? I have a theory. I met an old German guy who grew up after the war with an outhouse. He was so obsessed with toilets that he built a house with two bedrooms but three full bathrooms. A childhood neurosis about toilets. I think something similar must have happened to the Chinese.

So let’s learn from the world’s fastest-growing economy: We demand the Freedom to Pee! (And while I’m making demands on the Berlin government: While you’re building all those public toilets, free Wi-Fi wouldn’t be a bad idea either!)