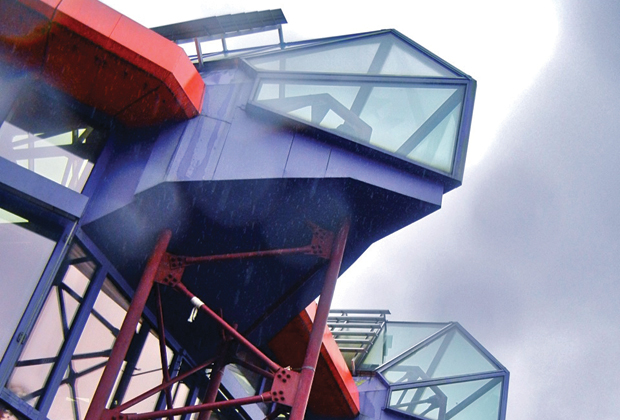 Berlin is the world’s curio cabinet of karmic pain. If you add the Berlin Dungeon’s fanciful sadism to the tales of East Germany’s Stasi and the Nazis’ SS, our city’s history is a sea of cold-hearted cruelty stretching back to its very founding. Lost in this beloved tourist narrative are Berlin’s forgotten monuments to carefree fun. In the 1970s and 80s, the East’s Socialist leaders went on a giddy spending spree, building colourful pleasure palaces intended to win the hearts of its increasingly grumpy residents. Like the endangered fun parks highlighted in last month’s column, they’re struggling to survive in the post-Wall era.

Case in point: the much-mourned Palast der Republik (1976). Ostensibly East Germany’s congress hall, the building was dolled up as The People’s Pleasure Palace with a mirror-glass façade, restaurants and a bowling alley. Post-Wall, it found itself as welcome as a clown at a funeral and was summarily demolished.

If the Palast der Republik was the bronze-glass queen of East Berliners’ hearts, her hunky Prince Charming was the SEZ (photo). Opened in 1981, the Sport- und Erholungs- (recreation) Zentrum gave the city’s 1.3 million sports-mad inhabitants a year-round Taj Mahal of sweat. The 50,000sqm leisure park on Landsberger Allee had seven pools, a sauna, ice skating rink, and bowling alley. After a game of tennis, ping pong or chess, you could imbibe at any of 10 eateries including a beer hall and an ice cream parlour.

The high-tech glass box with candy-coloured beams and trusses was East Berlin’s populist answer to Paris’ Pompidou Center. On a busy day, 15,000 visitors packed the complex with lines out the door. Like the Palast, the SEZ quickly slid from Cold War adoration to post-Wall scorn. Reunited Berlin’s leaders left the SEZ to rust while pouring millions into the nearby Europa-Sportpark swimming/biking complex in a failed bid to attract the 2000 Olympics.

In 2003, they handed SEZ to Leipzig-based investor Rainer Lohnitz – for one euro. The deal called for Lohnitz to return the leisure complex to its former glory, but 10 years later it’s a boarded-up shell. The cash-strapped developer proposed surrounding SEZ with townhouses and a trailer park, but local officials shot down his plans. In response, Lohnitz has vowed to demolish SEZ and start from scratch.

The new building is the giddy apotheosis of a short-lived architectural style known as Plattenbau postmodernism. Its façade of pre-cast concrete panels is decorated in swoopy arches and stained glass windows, now punctuated with LED rainbow lights. Inside, up to 1900 spectators marvel at a stage sized for a rhinestone-clad army and equipped with a swimming pool and lifting platform 12 metres across.

Unlike other monuments to GDR joy, this Palast is alive and thriving in the post-Wall era. Friedrichstadt wears its dubious mission of bringing Las Vegas glitz to Berlin as a badge of honour.

Little engines that can

Critics say SEZ and the other East Berlin fun icons are doomed because they’ve outlived their time. Really? Just east of Spreepark lies another happy Cold War relic still packing in the crowds. Wuhlheide’s Parkeisenbahn is a 7.5km-long narrow-gauge railroad opened in 1956 as an 80th birthday present for GDR President Wilhelm Pieck.

Its little engines have outlived Pieck and the Wall; they’ve survived budget cuts, a 2007 arson attack and a 2011 sex abuse scandal. The secret of the Eisenbahn’s success: enlightenment. It’s critically important that young 21st-century minds learn the joys of 19th-century transportation technology.

Memo to SEZ and other East Berlin funsters trying to survive on the brave new capitalist stage: frame yourself as education – or indulgent luxury, like Friedrichstadt Palast. Play the professor or the whore.