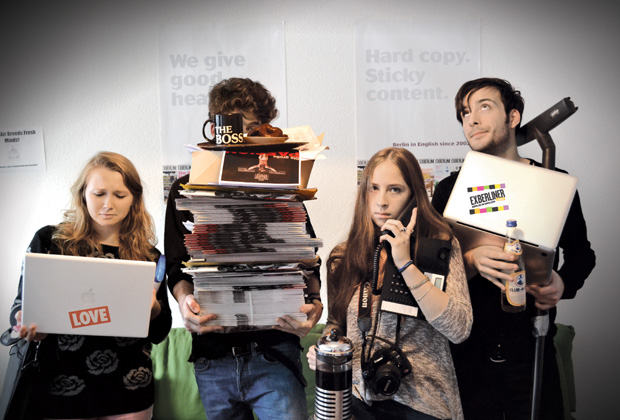 You’ve finished your degree, perfected your CV and bought a nice new wardrobe to enter the working world. But have all your best efforts only set you up for half a decade of toil within the shadowy world of internship servitude?

When the weekly Die Zeit published the article “Generation Praktikum” in 2005, a scandal erupted. Could it really be true that an entire generation of university graduates was being exploited as cheap or free labour with virtually no chance of entering the labour market?

An outraged Volk wanted answers. No empirical data on internships existed, so an official study was swiftly conducted by the Hochschuls-Informations-System (HIS) to shed light on the matter.

The results, published in 2007 under the title “Generation Praktikum: Myth or Mass Phenomenon?”, luckily revealed that all this fear mongering about mass exploitation was, in fact, a hoax. According to the study, only 15 percent of graduates actually do internships after their studies, and the vast majority of these do only one – hardly indicative of an epidemic.

What’s more, four fifths of those polled reported positively about their internship experience! “Generation Praktikum” had evidently been the fancy of a disgruntled journalist basing his analysis on speculation and hearsay.

The ruling CDU agreed, and when the issue of interns’ rights came up in parliament in 2008, it was promptly quashed. Legal recognition and entitlements would only harm young job-seekers by “killing internships,” CDU education minister Annette Schavan explained, and hence the only judicious thing to do was to write up a manual for interns, delineating the rights they don’t have anyway, so they can, hypothetically, protect themselves from the handful of “black sheep” employers out there – information is power.

The conclusive 56-page booklet, entitled Praktika – Nutzen für Praktikanten und Unternehmen, was published last July. Now on the 24th of this month, government and union representatives are supposed to meet at a merry conference to celebrate the end of the whole pesky affair (at time of writing planned at the Umspannwerk Kreuzberg).

In a mere six years, the internship problem that never was has been resolved by printing a pamphlet. If there is one thing that’s not a myth, then it’s German efficiency.

Yet anyone who’s talked to a graduate in the last decade in Berlin might wonder how the HIS study was conducted to yield such results. A closer look will inform the fussy reader that the participants had only finished their studies between six and 18 months prior to being polled. Know many recent graduates who have found a steady job in that amount of time?

So what are the remaining 85 percent up to? Maybe still busy with their first of many internships to come! Furthermore, this is a very sector-sensitive issue: engineering, finance and the natural sciences, for instance, are essentially unaffected. Consider culture, and the picture becomes far less rosy.

The same applies to regional differences. In short, poll young Berliners, a population stricken by high unemployment in a media- and culture-oriented economy and you’ll get radically different results. Though no Berlin-specific studies have been conducted, Rosmarie Schwartz-Jaroß, head of the Humboldt University’s career centre, says the situation is particularly drastic here.

In addition to its status as a cultural hub with a stagnant economy, she explains, “Berlin also has an exceptionally high number of students, particularly in cultural studies and humanities, who are willing to work for free out of desperation.”

Consequently, “there are more internships than in the rest of Germany, they are lower paid and they’re also longer than the national average.”

Lisa, 28, provides a paradigmatic case. After graduating in cultural anthropology from the Freie Universität (FU) last year, she sought a career in film production.

“I didn’t want to do an internship because I’d already done several in film and TV during my studies – at ZDF for example – but I couldn’t find anything. All I got were invitations for internship interviews.”

With no alternative, she reluctantly accepted a three-month internship at Story House Productions, a large international production firm with offices in Berlin. Paid €250, she worked fulltime – weekends and 15-hour days were commonplace – fulfilling menial organisational tasks. When they offered her a three-month prolongation, her responsibilities didn’t change but she was able to haggle out a €250 pay increase.

Three more months later, Lisa was not only a perfectly trained junior employee but also one appreciated by her superiors, since she was offered a six-week contract as a researcher. “But it was paid only €800!,” she says. “That’s still an intern’s wage.”

With one intern for each three-person team and a fresh supply every three months, the company was clearly relying on interns to survive, “almost exclusively graduates.”

When later given the possibility of extending her contract by two weeks, Lisa called it a day – “if you’re given that much responsibility, you must be paid accordingly, otherwise why would you sit there till midnight, or on the weekend, if you can’t pay your rent?” She’s now back to sending applications.

So have internships replaced jobs across the cultural sector? That’s’ the conclusion of another survey conducted by the FU and the Confederation of German Trade Unions (DGB) in April this year.

“Eighty one percent of interns polled felt they had done the work of a regular employee,” says René Rudolf, the head of the DGB’s youth division, adding that he thinks this is now the established standard: “Too often, regular work is done by ever-new interns. In many sectors, regular positions have disappeared and are filled by interns instead.”

In addition to being regrettable, this is actually illegal. An internship is required to be primarily a learning experience, and if it turns out to be regular employment in disguise, you’re entitled to sue your employer for just compensation.

The catch is: the burden of proof lies entirely with you. So, unless you’ve got a contract clearly outlining your tasks (very rare) and have kept a detailed log of your activities from day one, you’re basically David taking on Goliath without a sling.

And the exploitation of free or cheap intern labour is not limited to the private or corporate sector. Typically, most large state-sponsored festivals in Berlin work as de facto intern factories.

“There is no way the Berlinale could subsist without interns – they make up a third of staff!” says Melitta, a cultural studies student who did a three-month internship in event management at the Berlinale Film Festival this year.

“The work was monotonous and I wouldn’t say I got to challenge myself with the tasks I had to do.” She was paid €400 a month for mostly filing, archiving and answering the phone. But there is worse.

Just ask Jessica, a 24-year-old with a bachelor’s degree in history, who interned at the Institute for Cultural Diplomacy, an NGO whose stated mission is to foster cultural exchange, last summer. She reports a 70:5 ratio of interns to supervisory staff: “There are 20 new interns starting every Monday!” she says. “The work is unpaid and mind-numbing – databasing, call centre-like tasks, mass emailing… It felt like being on a bloody assembly line!”

The internship was unpaid. No wonder the contract includes a paragraph on how the “intern is bound to secrecy during and after the internship.”

Like many of her fellow interns, Jessica eventually fled the Ku’damm offices, and she says she still fears possible retaliation from her former employer. What was Jessica expecting?

“It’s one of the best publicized internships on the net: just type ‘political internship Berlin’ – it’s at the top of the list…and it sounds so prestigious!” Tellingly, the organisation has been the target of the ver.di trade union, which following complaints, initiated an investigation for unlawful labour practices.

Despite ongoing abuses and the FU and DGB’s recent survey, there’s not much help to be expected from the black-yellow coalition. One line of reasoning is that the much-feared skilled labour deficit expected to befall Europe in the near future should resolve the issue once and for all – qualified young people need only wait, they’ll be beating employers away with a stick come deficit time.

But which sectors and cities will this benefit? “In the cultural sector I have few concerns regarding a labour deficit,” says Rudolf. “This discussion is more limited to industry, and Berlin isn’t an industrial location.”

The sad reality is that Berlin hosts a surplus of humanities graduates – unless they choose to acquire more commercially viable skills, they shouldn’t expect better internships or earlier employment any time soon.

In short, the situation is primed to deteriorate further, unless there is a substantial grassroots effort to improve it. The 2005 Zeit article did strike a nerve. Demonstrations followed. Concerned parties launched websites and databases documenting internship experiences and rating employers. Petitions circulated.

The “Generation Praktikum” hype culminated when the DGB launched a 150,000-strong petition in 2007, prompting the government to bring the issue to parliament the next year. So far these efforts haven’t prompted major reform, but the past month might carry a welcome omen for the city’s disenfranchised intern masses.

Is it time for the Occupy Wall Street generation to take their future into their own hands and move their encampment from the Reichstag to Umspannwerk Kreuzberg on the 24th?

Bottom line: either occupy Berlin with a new slogan, “No to Generation Praktikum!”, or switch to a more marketable profession.