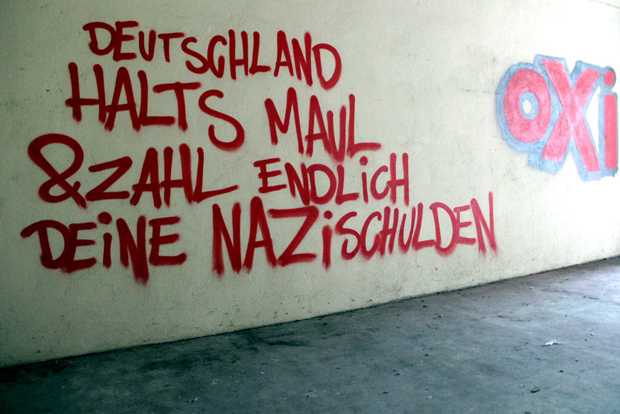 Let’s try a word association: When I say the word “debt”, what word pops into your mind? It’s “Greece”, right? That’s the result of an effective media campaign to brand the “lazy Greeks” as inveterate debtors.

Let’s look at this graffito from the streets of Leipzig: “Deutschland, halt’s maul und zahl endlich deine Nazi-Schulden!” Is Germany supposed to be the debtors country?

It seems doubtful that Greece will ever be able to pay back the €320 billion it owes, mostly to other European countries.

But what about Germany’s debts? Will they ever be paid back? Back in April, the Greek government brought up the question of reparations from Germany for World War II – and it’s about time! German militarism rained destruction across Europe, but it was particularly brutal in Greece, where whole villages were massacred by the SS. The total that Germany owes could be as much as €300 billion.

The Merkel government is worried about opening a Pandora’s Box: If they pay off Greece, won’t they be overwhelmed with claims for reparations from other countries they could never afford?

I don’t know, Germany. You probably should have thought of the financial obligations before you decided to start two world wars. That’s just basic fiscal responsibility.

Germany did pay something to Greece – back in 1960 the Bonn government sent 115 million DM to Athens.  In today’s money, that’s shy of €500 million.

But let’s not forget that in 1943 the German occupiers stole 476 million Reichmarks from the Greek national bank – the country’s entire gold reserves. That bounty, with interest, is worth about €11 billion today. Germany claims Greece forfeited all claims with the Two-Plus-Four Treaty of 1990 – but that’s a treaty which Greece never signed! The satiric news show Die Anstalt did a great job explaining how ridiculous Germany’s position is (link includes English subtitles).

Let’s try an analogy from my personal life: I break into my upstairs neighbour’s flat and ransack it, stealing €1000 in cash. When my crime spree is finally stopped, I hand him €50 in reparations. Then, I sign a treaty with my downstairs neighbour stipulating that all further claims for reparations are ended. Wait, the upstairs neighbour might ask, what about the other €950, as well as the trashed apartment? With Schäuble’s Swabian accent I can say: “That’s your problem!”

And so far, we’ve only dealt with Germany’s debts from its Second World War. The first one wasn’t cheap either!

The hard-line of Wolfgang Schäuble or Sigmar Gabriel seems particularly hypocritical when one considers that Germany’s debts were cancelled several times over the course of the 20th century. In 1953, the Greek government was co-signer to a treaty eliminating a big part of the German debt.

As far as I understand the economics of it, the only solution to the current crisis is a cancellation of the Greek debt. That’s why I’m sick of the endless moralizing of Merkel, Schäuble and Gabriel.  If they’re so worried about debts being repayed at any cost, they could write a check to Athens right now.