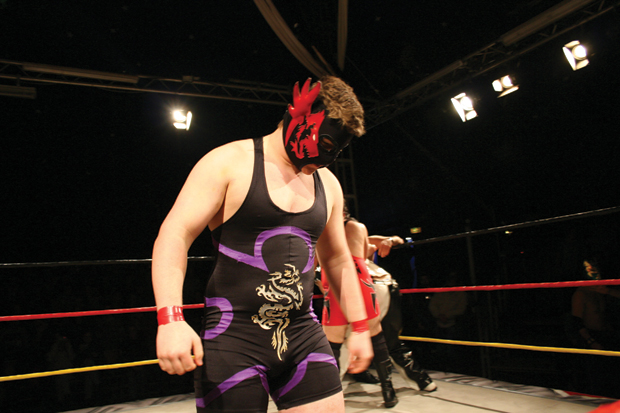 Once a month in the hinterlands of Postbahnhof, something very un-Berlin occurs: the German Wrestling Federation’s finest lycra-clad warriors do battle in Shake! as part of the organisation’s regular Berlin blowout. Organic and grassroots enough for the wrestling purist and with more than enough camp pomposity and ridiculous aliases to keep casual observers thoroughly amused, this is the sort of low-budget, lo-fi wrestling you won’t find on Sky TV: self-aware, self-effacing and ludicrously entertaining.

Packed in tight on tiered wooden seating underneath the circus-striped big top with 300-400 other raucous souls bearing beers (€2.50 a bottle) and homemade signs, you’ll be taken through proceedings by the suited GWF ring announcer. What’s said is mostly in German, but there’s enough wrestling-oriented Americanisms (“royal rumble”, “tag team”, etc.) to stay in the swing of things.

Once the pleasantries are over with, it’s straight down to business. The villains are villainous: underhanded, posturing receptacles of vitriol, throwing obscenities and creative hand gestures at an antagonistic crowd that gleefully returns the favour. Cash Money Erkan, for example, isn’t above kicking Bad Bones in the balls to retain his GWF Berlin title. The good guys, meanwhile, are good: ruffling kids’ hair, fighting the good fight and – led by GWF veteran Crazy Sexy Mike – dancing to “Gangnam Style” to send everyone home happy.

It’s not all muscle-bound panto with a paunch though; there are some genuinely impressive athletic feats to marvel at – Ringbrecher Pascal Spalter, a 1.90m, 140kg man mountain, charging across the ring and somersaulting over the top rope to take out four other men (and most of the first row), is certainly one of them. Contrived, maybe. Fake? Maybe not.

If you’ve been inspired by the cream of Germany’s wrestling crop, you can even join the GWF wrestling school here in Berlin (every Tuesday and Thursday from 8pm to 9.30pm in Neukölln). Switch off your sensible side, engage your inner child and make one of your new year’s resolutions a new year’s wrestle-ution.