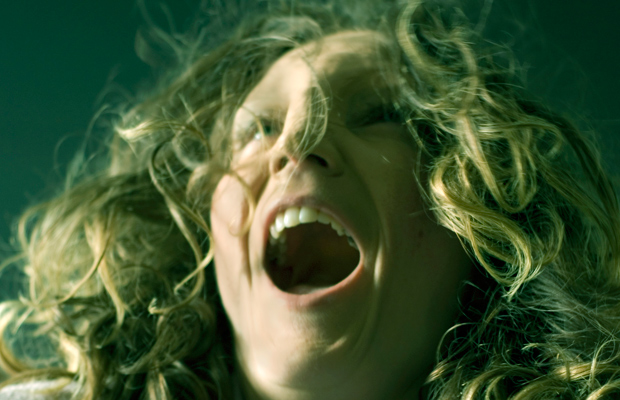 In a city of copycat electroclash that has never quite left the end of the 20th century behind, Janine Rostron, aka Planningtorock, is an honest original, if one whose releases develop at a glacial pace. Coming five years after her previous album, W (DFA/Cooperative) is multi-layered and emotionally complex, if rhythmically straight: a blend of virtuosic, effects-laden vocals, lush pizzicato strings, synthesized saxophones and textured, insistent beats. Live, video is also key.

Having recorded with The Knife on the Charles Darwin opera Tomorrow, in a Year, and now under the wing of James Murphy’s label, Planningtorock appears poised for Berlin breakthrough. She’ll play Astra on May 20 as part of the three-day Melt! Klub Weekender. Check out our interview with Josh Dibb aka Deakin of Animal Collective as part of our Melt! Club Weekender package.

Would it be fair to say that you adopt various personae?

Um, you could say that, yeah. The only thing I’m wary of, to be honest, is all these various moments in the record where you feel in a way that it’s a different sort of person, it’s still all me. I’m not the kind of artist that develops alter egos. If I manipulate my voice in a song, it still feels like it’s conveying my emotion, even through a really affected voice. So I would say it’s more like different times of myself.

It’s a tricky one, because I’m not that interested in a sort of genuine, original voice. I feel like I have lots of different voices within me. And I really liked that I allowed myself to do that on the record, to not stick with one sound and give myself the freedom to have every song have its own voice.

So altering your looks or wearing masks is not meant to cover up anything.

It’s like adding. Because when you do stuff like that, you get more attention. People are going to look at you even harder, and that’s the weird thing. With the mask [on the debut album], it was also my first experience with press, and I had a hard time. A lot of press shoots were cancelled for the first record, because photographers refused to take photos of me with the mask on.

I found this really interesting because I thought, “I’m sure MF Doom doesn’t have to take his mask off.” But as a woman, not always but sometimes, I came across this opinion of, “You should be proud of your face and you should show your face.” There was this notion that it was harder to imagine that a female artist would be conceptual, and that I found really shocking. That made me do it even more and explore it more.

Perhaps you pitch shift your vocals to blur the lines between gender.

Yeah. But it’s difficult… I’m very proud to be a woman. I’m not trying to be a man. But it’s more like exploring and discovering if there is something else, not just one or the other. And exploring if there are other ways of representing gender beyond clothing and sexuality. When I talk about it, I’m not sure what it is either.

Are your compositions, then, born out of conceptual ideas?

It’s usually sound. I like to write a lot with – this might sound a bit strange – pizzicato strings, my favorite sound. They’re very loaded, emotional and moving. It’s something that I’ve loved for a long time and I find it easy to write with. And that’s usually the beginning.

And then when I started to mess around with synthesized saxophone, it was great as well. It’s so punk. So I record a lot with these instruments, and then songs start to come. I usually bring the vocals in at the end. I’m not a lyricist who writes and then brings in the music; it’s the other way around.

How has W developed from your last record, 2006’s Have It All?

It came from a very different time for me personally. When Have It All came out, I had just left England and things were new. I was touring a lot and writing a lot of that material on the road, whereas W has been predominantly a studio record. I got deeper into production and developing my sound, beyond just writing. It’s mostly what I spent my time on. A lot of people seem to think that W is quite a dark record and maybe quite heavy – and I do think there’s melancholia in there – but I think there’s a lot of humor too.

A half-decade had passed.

I think the main reason it took so long was because I do everything myself. W hen you’re writing so much, there’s a point where you just need time off from it. You need to reflect a little bit, see where you are with the material. So that took time. And I also got involved in some other projects that took time as well, which was really beneficial. With the [Knife] opera, it was really good to make music that wasn’t about me. It was really just about the music, which kind of gave me a nice breather to come back to the record and finish it.

How did you find the process of working collaboratively?

It was great. I think that element was the nicest for all of us, because Olof and Karin [of The Knife] work together, but they also have solo projects now. Initially, it was just Olof and me that were going to do it. But because I had to finish my record, it was just unrealistic.

So we got Matt [Sims aka Berlin expat Mt. Sims] to come, and Karin as well, which was really great because they took over the whole vocal side of it. I didn’t want to do any of the vocals, because I deal with vocals all the time. At that point, I’d already recorded all the percussion for my record with my friend Hjörleifur Jónsson from Iceland. I suggested that we use Hjörleifur for the opera as well, which we did in the end. So my work on W kind of influenced the opera, and then finishing that kind of helped me finish my record.

What does the title of W refer to, anyway?

I had a really hard time finding a title for this album. They either all said too much or not enough. I came across the letter W, and it’s an interesting letter, because when you pronounce it, you say ‘double you’. So, it’s like ‘two of you’. I thought it was nice to let it be open-ended, so that people can interpret for themselves what it means. There are some very obvious meanings; I assume people would maybe think of ‘woman’, or ‘weird’, or ‘war’ or whatever, these big titles. I just thought it was fun to leave it a bit open, and I felt that kind of represented the diversity of the record. It has an openness.