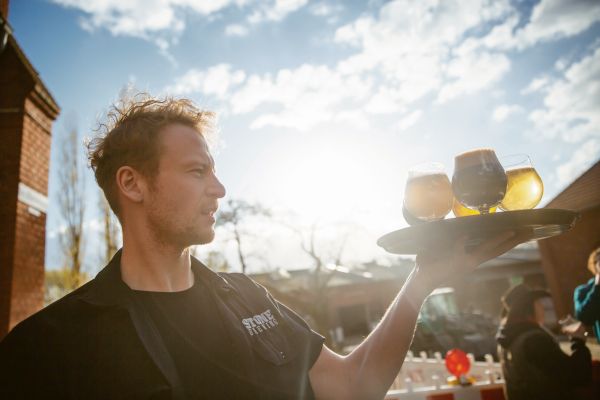 Back in 2014, American craft beer company Stone Brewery set up shop in an old gas plant in the southwestern suburban neighbourhood of Mariendorf, accompanying their announcement by literally crushing an assortment of German pilsners and lagers with, well, a stone. The message: the days of the Reinheitsgebot, that German beer purity law instituted 500 years ago, are numbered. More than a few Berliners called them “arrogant bastards” (to quote their signature bitter brew) for that stunt. But love it or hate it, Stone Berlin is here to stay: at the beginning of this year, they finally started distributing their intense ales, porters and IPAs to German bars, and by the end of the summer they’ll put the finishing touches on a massive restaurant and outdoor biergarten along the lines of their World Bistro and Gardens in San Diego. For now, you can visit their “Library Bar”, which currently resembles a Brooklyn warehouse plopped in the middle of southern France, and try their creative if pricey brews, including a dessert-like Vanilla Porter or a high-alcohol Ruination IPA (€6.40/0.3L) fresh from the tap.

For all Stone’s bragging, it’s not like Berlin needs America’s help to embrace craft beer culture. Among the latest hometown hipsters to try their hand are the German trio behind BRLO, who this year expanded their operation into a brewing plant by Gleisdreieck park and started distributing their German and American-style beers across Europe. Their own biergarten, opened in early June with a bistro to follow in September, offers porter, pale ale, Weiße and Helles (€3.50-5.50) – with a wheat beer currently undergoing trials. Not as militantly anti-Reinheitsgebot as Stone, the Berliners are instead focussed on beer-food pairings – expect a “beer sommelier course” later in the year. Either way, if you’re looking for a palate-expanding (if more expensive) alternative to Prater and the like, you’ll be in luck this summer.