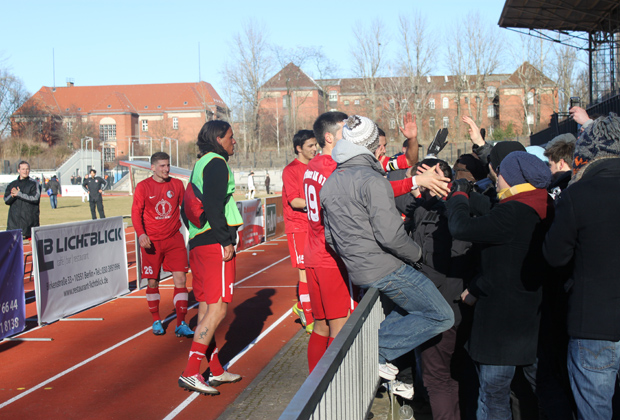 The legend of Luther Blissett is well known, but a quick re-hash may be appropriate. When the Watford striker signed for AC Milan it was rumoured only to have happened because the Italian giants thought they were buying John Barnes. But from small hills grow great, strange, mountains. Luther Blissett became the nom de plume of a Europe wide group of anarcho-intellectual radicals. Books, artworks and happenings sprung up in “his” name. He failed on the San Siro pitch, but the legend perpetuated was infinitely more successful, and remains.

Football is weird sometimes. From equally inauspicious beginnings Kevin Neuhaus may have made a similar step in the same direction. The sportsdesk is living in strange times.

Where to start then? With the English? No, their unique part of this story comes later. It starts with a derby.

Not just a derby anymore, though. BAK 07 vs. BFC Dynamo has developed into a huge (in the context of German regional football at least) match. A rivalry keener than that of Union and Hertha, and with the potential to become as poisonous as any, needs to be seen in the context of the history of Berlin and its football.

Dynamo won the GDR Oberliga more than any other club. Their perceived state sponsorship, and that of Stasi boss Erich Mielke, ensured that as soon as the sheen was to come off those trophies then the resentment that had been building up against them for years would crash onto the shores of Hohenschönhausen like a tidal wave.

They now survive off the memories of great nights in Europe amid the fading mementos that adorn the walls of their club bar. The resentment against them has solidified their own bitterness at their new city that has shunned them.

Upstarts BAK had beaten them last year in the Berlin Cup Final – a game marred by BFC fans ransacking the pitch of the Jahn Sportpark – and currently sit top of the Oberliga Nord, ten places above Dynamo. Sunday’s match was a derby for sure, and one that the police were worried enough about to make sure that they were there in huge numbers for the 500 or so away fans.

But it also felt like a phoney war. The big clash is coming in the Cup again later this month as the teams meet again at the place where they played last year’s final, and where Dynamo have all those grand memories. Although officially a home game for BAK it has been moved across the city because there are no floodlights at the Poststadion. Dynamo, under their boss, former Bundesliga player, Heiko Bonan, have no chance in the league. The Cup will be a chance for revenge.

BAK needed a result, having lost their first game of the season last week at Malchower SV (conceding only their fourth and fifth goals), but with it had slipped to second.

The game didn‘t live up to the hype, was littered with niggly fouls and any momentum quickly drained away. It was a game of contrition. Both teams played with a lone striker, but with different styles. BAK tried to pass the ball patiently through the midfield craft of Can Akgün. Dynamo tried to get it forward as quickly as possible to Richard Steiner. Neither were terribly successful. Pardis Fardjad-Azad hit the post for BAK with a glancing header and had a good effort from 20 yards out well-saved by Daniel Rothe. Steiner went close in the first half, but that was about it. Dynamo are yet to win this calendar year – they haven‘t even scored yet – but, to damn them with faint praise, they are improving.

So, freezing cold and restless at the fare being dished out on the pitch it came as surprise to hear “One Kevin Newhouse, there‘s only one Kevin Newhouse” (noting the English pronunciation of Neuhaus).

He hadn‘t even made it onto the pitch. He was warming up looking bemused, but a group of thirty odd blokes on a stag do had found a new hero. It was the only name they could come close to pronouncing.

With Hertha’s match being switched to Friday night they had found their way to BAK. It is hard to know what the hundreds of Dynamo fans made of having “You only sing when you‘re drawing” at them, but it is fair to say they didn‘t expect it. They can look terrifying – and have a reputation – but this had passed over the drunken ranks of the English like an ironic statement at the American embassy.

Of the tension they knew nothing. Gloriously idiotic, unflinchingly genial, as “Newhouse” got a final round of applause and his spray on tan got lost beneath his blushes (and total bemusement). They finally filtered away to confuse someone else in the city. He now has a fan club in England of which he knows very little. And some English have a new hero, of whom they had never heard of before. English Stag-dos, the cryptic history of Berlin and it‘s football, and a dada-ist happening aren’t usually the best of bedfellows. But ask Luther Blissett, sometimes things can go very strangely indeed.