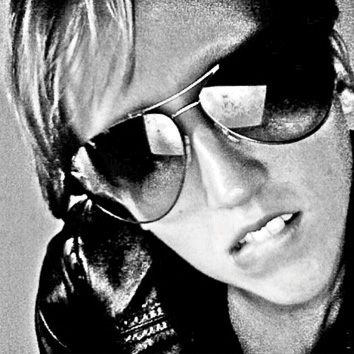 Anne Lena Mösken started as a freelance writer in 2008. She’s become the magazine’s most intrepid reporter, writing for nearly every issue (also under the alias of Geraldine, nightlife columnist), while freelancing for German mags (Neon, tip, Zeit Campus) and Berliner Zeitung, where she now works fulltime.

There was a long moment of silence, something that you certainly want least when you are in a job interview. Nadja was sitting behind her desk, eyebrows raised. It was the second time I had come to the Exberliner office (the first time, Nadja didn’t have time although we had an appointment). What I found quite rude at the time I later learned was due to the fact that Nadja was a boss in the purest sense of the word: she was in charge of everything and taking care of everything. In the following years, I would find myself wondering a lot how she managed to always be up to date – with movies, theatre, German, Russian and French politics, tending to a brigade of wild apprentices and freelance writers to which the word ‘deadline’ is often an alien concept – while at the same time being a mother. And maybe sleeping from time to time.

At my second appearance, I finally received my audience. Seconds before this hellish silence I had just explained to her that I didn’t want the internship I had applied for. I wanted to freelance. I had just finished university and needed to pay my rent. No more internships. I gave her a hopeless smile. “Well,” she finally said, “what do I do with you?” I swallowed. “You don’t have a degree in journalism. You are not even a native speaker.” She paused, then sighed. “Alright, pitch me some stories, and I will see…” I was sure I would never hear from her again.

But a couple of days later Nadja called and asked me to interview video artist Candice Breitz, who had just opened the first exhibition at Temporäre Kunsthalle. If I did it well, I would get to freelance for Exberliner, she told me, and hung up. So, I had a nice chat with Mrs. Breitz, asking her all kinds of personal questions. It was a solid interview, nothing ground-breaking, but I was satisfied. A day later Nadja called: “What happened?! Breitz’s lawyer just called me this morning. If we publish the interview she’s going to sue us!”

Now I was sure I wouldn’t get the job. Who wants a writer whose interview subjects send their lawyers? But what I was to learn that day was: Exberliner is exactly the magazine that would never duck when things get dirty. Nadja seems to never be afraid of anything – and, faced with threats or scandal she always backs up her writers, like a mother. “Okay,” Nadja said, “I trust you.” My first interview for Exberliner went to print with a teaser on the cover: “Candice Breitz: The unauthorised interview”. And I, I was an Exberliner now.

The artist’s lawyer never called again. But this was only going to be the first story that left me sleepless.

In the past four years I’ve been banned from Bar25 by Türnazi Steffi Lotta after an article about their public viewing location for the World Cup went under the header “Corporate slumworld”. (It was actually kind of Nadja’s doing: She edited the text and “spiced up” my carefully voiced, more diplomatic critique quite a bit, but, oh well, she was right!) I would meet with the autonomists behind Berlin’s revolutionary May 1 riots. I would talk to an anonymous policeman about police violence, and, something I will certainly never forget, sit down with a completely wasted, vodka-swilling Weekend club owner who tried to touch my breasts throughout the interview. After four years I can say: I have never had so much trouble writing for a magazine, but most likely I have never had so much fun!