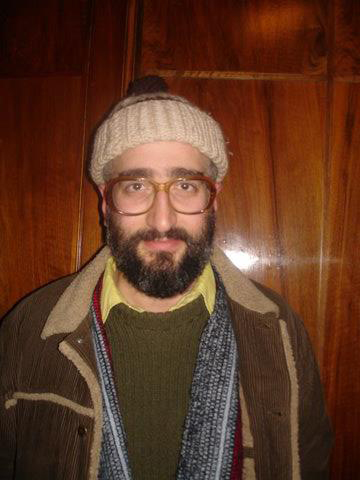 Also known by his many DJ aliases – Shiner, Busted Bongo, Flohmarkt, et al – D. Strauss has been Exberliner’s music editor since 2002 (after a brief stint as sex columnist Dr. Schlong). He moved from New York to Berlin earlier that year and has lived in the same Prenzlauer Berg apartment ever since.

A few years ago I would have expressed shock that Exberliner had made it to its 10th anniversary, just as I would have doubted that I would continue to be waylaid in the mire of Berlin’s collapse from most soulful to shallowest of all European cities. But now, the magazine seems as right and regular as the smooth movement of money from the pockets of the indigent into the hands of a thousand-year gentry. The hot-to-trot Kiez shifts around, but the adjectives of concern remain constant (the rumours of sushi, the lamentable yuki).

But what of the music? Berlin club-owners, unused to criticism in a city in which relationships are the major capital, are still either thin-skinned or self-destructively honest. I’ve only been banned from a couple of clubs over the last decade; most promoters still pretend they’re glad to see me.

When Exberliner started, a €4 entry at the most popular clubs was common (it was also rarely paid). It was €2 for a large Becks; now it’s €3 for a small. Needless to say, that has been a major source of inflation (and guestlist inflation more-so). Even now, though, anything over €10 is unlikely, and sure to ensure Spanish vomit on your Uggs. In 2002, Berlin had a real musical identity: cabaret-esque electroclash battling 1990s minimal. Today, the sound of the city is pretty much decided by whoever is passing through. Perhaps we’re all better for it.

As for my column, almost 10 years old, it’s condensed a bit – I can recall one month I insult-peppered over 30 acts coming to town. Now we’re down to a steady five and Deep Purple still manages to make it almost every summer (not this one, though: has-been fans will have to settle for Billy Idol). Its basis has remained consistent: I pick an abstract emotional crisis I have been contemplating, then attempt to shoehorn music criticism and slightly-out-of-date pop culture references into the temporal psychological framework. When that doesn’t work, there are puns and fat jokes. It’s a formula that has served me well. And, for my regular and aging readers, I would hope you, as well.