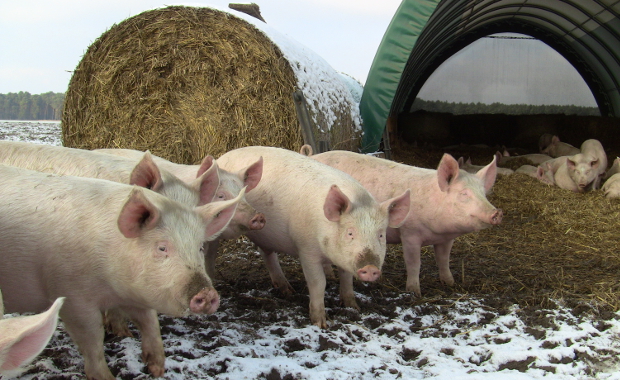 In September, Matthias Wolfschmidt of Foodwatch made a shocking announcement: one out of every four animal products in Germany comes from a diseased animal. Now German food authorities are planning to introduce a voluntary “animal welfare” logo. Will it help solving anything?

For his book Das Schweinesystem, Wolfschmidt* talked to major food producers and had a look around dairy and pig farms. His findings? Sick animals and their byproducts are everywhere, whether you buy from from organic shops or supermarkets.

Did you hear the minister of agriculture recently proposed a new animal welfare label? What do you think about it?

Instead of enforcing the healthy husbandry of all animals, Christian Schmidt, the minister of agriculture, is leading the consumer astray with this animal protection label. Even if the criteria are appropriate, the voluntary label implies that the choice is between animal cruelty and animal-friendliness. Such a “freedom of choice” is cynical and cannot be justified ethically or politically. Mr. Schmidt obviously lacks the courage to ensure, with the help of clear mandates and laws, that only food products from verifiably animal-friendly production systems are offered. His voluntary label means that for for 80 to 90 percent of farm animals, the competition will continue to impose millionfold suffering and pain onto them.

How did the investigation for your book start?

We were looking at several studies which the Scientific Advisory Board on Agricultural Policy at Germany’s Federal Ministry of Food and Agriculture used for its report last year, called “Pathways to a socially accepted livestock husbandry in Germany”. They determined that the agriculture system as it is now is not sustainable, but they did not sufficiently evaluate animal health. So we did it.

And what did you find, exactly?

We found that among cattle and milk cows, you can consistently find udder inflammations and diseases of the hooves. Fertility disorders and metabolic diseases are other common problems. Laying hens have broken bones, cardiovascular malfunctions and behavioural disorders. Chickens have problems with their pectoral muscles, due to being so heavy – so they fall on their chest and develop ulcers. Most of them do not live past 35 days. Many pigs also develop hoof, lung and liver diseases and skin defects. There are cases of cannibalism: nibbled-off tails and ears. So their tails are being cut off. The animals are being adapted to the housing conditions, instead of the other way around.

What makes livestock so prone to disease?

You could visualise it as if they were running a constant marathon. Fattening pigs have to gain up to one kilogram per day; cows are constantly producing milk. So when there is one factor which is off – the climate in the stalls, the hygiene, the soil – they often cannot handle it. And if the farmer is not carefully watching the animals, and does not recognise the first signs of sickness, it can snowball.

But surely this only applies to factory farming? What about animals raised organically, or under stricter private “better than organic” certifications like Bioland or Demeter?

These findings came from all kinds of farms. Contrary to what we assume, it is not the case that smaller agricultural operations are capable of ensuring greater health among livestock – and the same goes for organic farming. For example, according to the studies, 50-60 percent of organic pigs’ livers showed parasite infections, and 50 percent of them had lung infections – that’s similar to the numbers in conventional farming. Even though the overall conditions for the animals are better, it does not automatically result in better health. When animals are allowed to go outside, then they dig and wallow – it’s wonderful, but simultaneously the chances of them catching a germ or parasites is way higher. The more complex the system of keeping them is, the higher the demands on management. It requires major awareness, knowledge and dedication.

So buying (and paying much more for) organic meat doesn’t make a difference at all? That’s a pretty radical claim.

The only thing is, you can comfort yourself with the fact that on a formal level they had a nicer life than the ones being factory farmed. But yes, we receive many accusations from people saying, “I purchase organic food, and now you’re putting it down. How mean is that?” And also from vegans, who say we’re trying to increase acceptance of animal husbandry and cruelty under the guise of pretending we want the animals to be healthier. We also get a lot of criticism form conventional farmers, and organic ones… so, everyone!

In the slaughterhouse, the organs are thrown out and the muscle meat is usually not affected. Unless the animal had an acute infection – then the whole animal will be tossed out. On the other hand, if we talk about milk, there will be an increased amount of somatic cells and therefore also immune cells, leucocytes and even pus flakes. Theoretically, all of this is centrifuged out in the dairy – so dairy companies, to a certain degree, do not care whether a cow is healthy or not.

Whose fault is it all? The farmers?

It’s the system. On a management level, it is very expensive for farmers to house the animals in a way so they don’t get sick. Providing the slaughterhouse with healthy animals is not rewarded. If an animal is inspected and found to have suffered from a lung infection, the farmer might get a euro or two less, but overall, it’s paying off more than keeping them healthy. And then we have market conditions which force farmers to demand a high performance from the animals. They get very little money for the products the animals give, be it milk, eggs or meat. It leads to an oversupply of animal products on the market – in Germany we produce about 15-20 percent more meat than is being consumed, and 20-30 percent more milk. This, again, leads to the farmers being under enormous price pressure. There are around five actors who determine the prices in Germany: the retail groups, Aldi, Lidl, Rewe, Metro and Real. They cover 85 percent of the market and can basically negotiate everything they want to.

Could veganism be the solution?

Around 1-1.5 percent of the German population is vegan, and around 10 percent are vegetarian. I wouldn’t mind if all of society started eating vegan, but whether the vegan lifestyle would actually work for the whole population, I don’t know. I am quite pragmatic when it comes to that. As long as 99 percent of society is consuming animal products, there will be no way around thinking about how we want to treat those animals.

*Matthias Wolfschmidt is a trained veterinarian and deputy managing director of the consumer organisation Foodwatch. His book Das Schweinsystem (Fischer Verlag, 2016) points out how widespread animal illness is in German agriculture and proposes possible solutions.