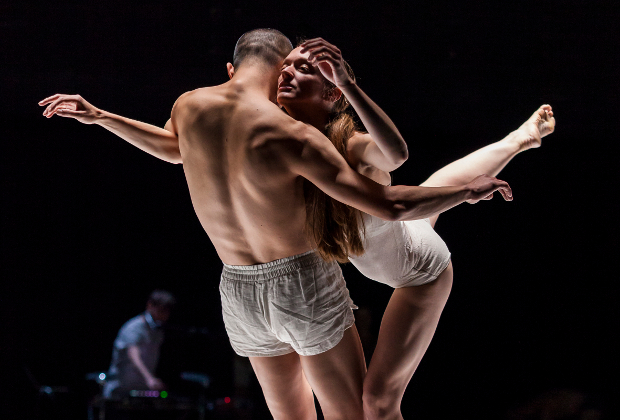 Emanuel Gat and Awir Leon open this year’s Tanz im August festival with SUNNY. The piece is an unpretentious, open, and largely improvised collaboration between music and movement. Lily Kelting sat down with the duo to discuss musical genres, avoiding definitions, and the importance of letting go.

I loved Virve Sutinen’s comment Thursday that the only unifying theme of the festival is the question: “Who are we?” So maybe we can start with that – who are you?

Emanuel Gat: I don’t think I ask myself this question from the outside in, but always from the inside out. I don’t try to put myself in some kind of cultural or historical or geographic or national or artistic context and try to define myself in relation to that. I do my thing, they do their thing. And then we can ask how it reflects on culture, and we can see how it relates to a context. Because we’re not in a bubble: we are inside cultural, historical, political, economical contexts. But at least me – I don’t make art in response to that. I let the artistic process lead the way.

So can you explain your own artistic process?

EG: It’s about figuring out a process with the people that I work with so that it is an open field of opportunities for them. But in order for that to happen, you have to do a lot of things. If you just say, “Everyone can do whatever they want,” then nothing happens. How can you still maintain that space and that process as open with endless possibilities – and still make it something that holds together, that’s not just random things happening?

How did SUNNY come to be?

Awir Leon: So I was a dancer with Emanuel for the last eight years, and I was always at the same time working on my music. When we started talking about the process of SUNNY, I was in a place where I really wanted to spend more time on music and move away from dance a little bit. So we were talking about this in these terms, so Emanuel said, “Okay – don’t come as a dancer, come as a musician.” And for me, that was perfect.

Can you tell me a little bit about your musical style?

AL: It’s a lot like what Emanuel just said. It’s probably related to the way he sees it, because after eight years of working as a dancer with this guy you start saying things the same way. I never tried to do a style.

EG: In music, it’s hard, because it’s so defining. Like: “What are you? Do you do hip hop? You do electronics?” You can’t escape it.

AL: It’s super hard. People keep wanting to know what kind of music it is.  You have to define it.

It seems like the boxes of musical genres keep getting smaller and smaller, too –

EG: And if you can’t give the definition, you need to say who it’s like. You have to give a name.

AL: Exactly. It’s very frustrating. I don’t think about these boxes. But I also don’t want to be in the process of trying not to fit into any of these boxes, either. Otherwise you’re just running away from things, and that’s stupid. So I stand in front of my machines and do stuff, and whatever happens, happens. That’s really what it is.

How has your experience as a dancer has influenced your work as a musician?

AL: In the way of working together, for sure. We know each other and how we function, so things go fast. Maybe it helps me be a bit detached from the material. One of the things that Emanuel asks us as dancers is not to be attached to the material. It’s very hard to do this as a musician because all you have is your material, there’s nothing else happening.

So I try to do this by making myself overly busy. In performance, I am playing almost everything live, which is a lot. But I do it like this so that I don’t put too much importance on any one thing. For SUNNY it’s even more interesting because I have the information of what is happening on stage at the same time. It’s interesting to relate to the movement and respond to it without setting that relationship.

You must have to be so present.

Emanuel, what does this phrase mean for you – don’t get too attached to the material?

EG: There’s a normal, natural tendency, when we make something, to fix it. You make choreography, then you fix it. You say, “Okay, this is the best version of this, now we’ll just try to reproduce that the whole time.” I try to push another way, and say, “This isn’t bad, what we have now. Let’s see how it will be tomorrow.” And always give a place for that choreography to evolve and change. Not to fix it, so it dies. Choreography is a living thing – because it’s made out of people, and people are alive. If you don’t give the system that they are functioning in the possibility to change and evolve and transform as well, then there’s no more flow.

But this is something you need to actively push for. We don’t want to jump off a cliff and see what’s going to happen. So we have to consciously keep that open. You’re basically jumping off a cliff every time. You know a few things will hold you on the way down and you have an idea maybe about what you’ll encounter at the end of the drop but you still have to jump. You’re not going to take the elevator down.

I think a lot of people would find it really difficult to have the constant feeling of free-falling.

EG: It’s a muscle. You train it. At the beginning, it’s super stressful. It’s a way of thinking and being that you can train. You can do it again and again and again and again and accept being in a place of groundlessness. It’s not like everything is secure anyway. If you practice enough, you stop linking this feeling with something bad.

EG: Exactly. Or as an opening for possibilities.